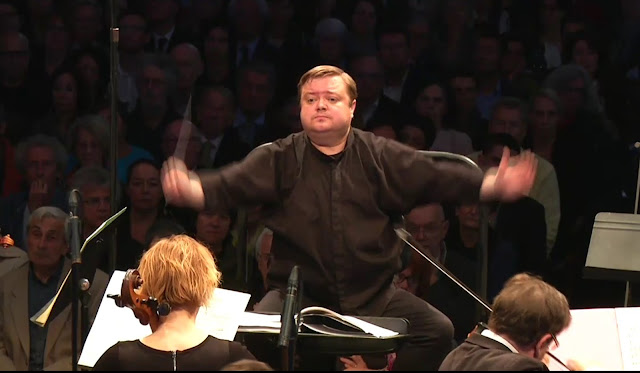 Mikko Franck conducted Mahler Symphony no 3 with the Orchestre Philharmonique de Radio France last week in a striking performance which filled the basilica of Saint-Denis "de toute sa majesté." (video here)  A majestic performance to match majestic surroundings, even if the fixed camera positions don't do the film justice. (audio only here). This is a superb performance: someone I know was actually present at Saint-Denis, and even more enthusiastic !

A magnificent reading, where the craggy "peaks" in the landscape loom darkly over sunlit meadows. Both aspects of the symphony are fundamental to meaning. I've listened to this so many times over the past week that I'm too exhausted to write as much as I usually would   A bit stunned, too. From the get go, Franck's approach is masterful. He knows what the OPRF can do, and pushes them. The intensity of the first theme feels dangerous, not violent but uncompromising. When the next theme enters, the pizzicato dances brightly : sparkling sunshine ?  moments of happiness ? Franck doesn't linger, pushing ever forwards, so the expansive figures which follow seem exuberant.  Mahler's music is striding forward as the composer himself did in the mountains of the Salzkammergut. Hence the gloriously open vistas, the horn and trumpet calls. Then, suddenly dark moments return and the horn calls more poignant, the violin melody delicate. But flurries on winds and strings whip along, as energetic as mountain breezes.

"Pan erwacht: Der Sommer marschein ein" This long first movement can baffle, but Franck observes its structure, intensifying the sense of forward thrust. There are marches, here, yes,  and part way the orchestra breaks into a wild gallop.  But these aren't "military" marches even when the drums roll. The brass theme returns again, triumphant : Pan was the God of Nature, of music and significantly of disarray.  But it would be amiss to approach this symphony in sloppy disarray.  This orchestra is so good that Franck's tight discipline spurs them on.  Another visual metaphor : the energy of many stallions coming purposefully together.  Us modern, urban folks don't remember why "horsepower" is a measure of an engine's power.  Listen for that cracking ending !

The second movement here is purposeful too.  No lazing in the sunshine here.  Listen to the sharp,  crackling percussion chasing the orchestra on, and later the woodwinds.  Franck gets good interplay between nostalgia and excitement : one without the other wouldn't be quite so piquant.  The violin melody is exquisite. Yet immediately the mood is cut by Dionysian swagger. Summer rushes forth with unstoppable vigour - listen to the brass repeat the birdsong, but with sass and rude health. Kukuk ist tod, kukuk ist  tod - but not for the moment!  Summer is short in the mountains, as the lingering call of the distant brass reminds us. But while it's here it's glorious. Thus the posthorn call, heard from a distance, as if it remains suspended in time. The world may change, but somehow the posthorn is eternal.

Mihoko Fujimura has been singing Mahler for years. Here, she's magnificent : elegant yet austere and dignified.   Voice and violin dialogue : the rest of the orchestra seems stilled, listening in rapt concentration. For all the abundant life in the orchestra up to this point, we're hit hard by the inescapble fact : things come to an end.  We're not left there long, though, as the Choir of Radio France sparks into action.  Bimm, Bamm, Bimm bamm. Notice the regular rhythm, her "march of life quietly resurgant.  Another ;long, poignant look backwards.  Wonderful violins, their soaring tessitura suggesting upwards movement.   Perhaps in Mahler's time, orchestras weren't so technically proficient but that's no excuse.   Mahler's music is so beautiful, so wonderful that it really needs performers who can access levels the composer might have dreamed of.  +As the symphony moves into its last, all-important themes, refinement is of the essence. We are no longer in the mountains, even as metaphor, but in an altogether more elevated,  spiritual plane.  Magnificntly assured playing. Now the "march" is beaten out firmly on timpani, with quiet confidence that doesn't need overstatement. 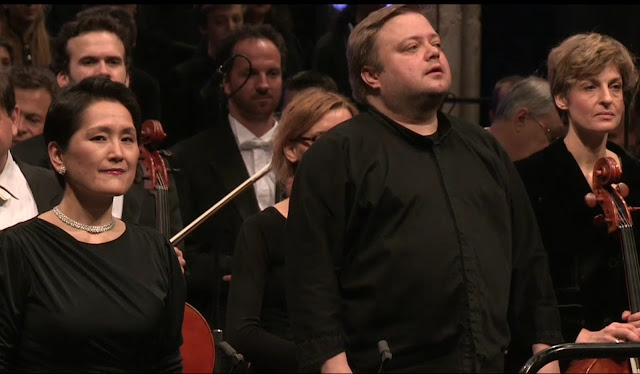