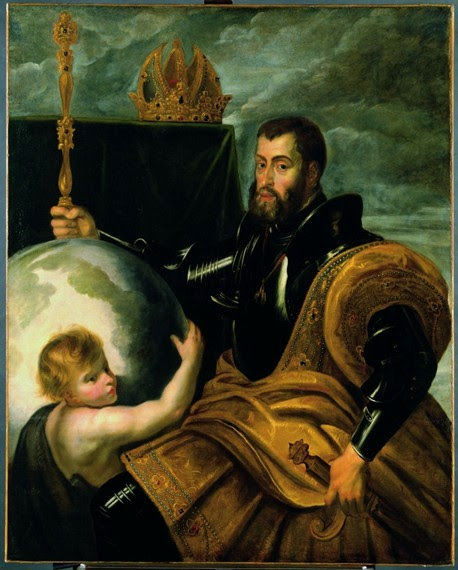 Are we witnessing live 1933 the remake?  Is history repeating itself? The premiere of Ernst Krenek's Karl V, scheduled for 1934, was overtaken by events. Now more than ever we must take heed of this opera and its horrifying prophecy.

Krenek's Karl V Op 73 is based on the life of Charles V, Hapsburg King of Spain and the Americas, Holy Roman Emperor and conqueror of the Turks: the first multi -national world empire, which easily surpassed in scale the original Roman Empire.  The grandest monarch in European history lies dying, preparing himself for judgement before God.  Priests and bishops are praying,  but the king turns to his youthful confessor, Juan de Regla, precisely because  he's objective and hasn't yet  been sucked into the morass of intrigue that curses the corridors of power.

Karl V unfolds through a series of vignettes. Structurally the opera operates on multiple levels and multiple dimensions, constantly moving back and forwards in time. Since Karl V predates Berg's Lulu by several years, Krenek could have invented opera as cinema. Certainly he, like Berg, was interested in modern art, modern ideas and the movies.  Just as in film, orchestral music  occurs mainly at critical junctures where voices are stilled, such as the beginning of the final act.  Mysteriously beautiful, searching sounds suggest that, while Charles V's body is in a comatose state, his soul is traversing the universe.  Krenek also employs Sprechstimme throughout to emphasize philosophic ideas. Singing, in the normal sense, would distract, and normal speech would be too mundane.  Eventually your ears adjust and the Sprechstimme becomes effortlessly natural.

In Charles V's time,  Protestantism challenged Catholic Europe. Unlike earlier schismistic movements, it took root and morphed into politics, partly because  Charles V allowed a level ,of religious toleration, but the genie of nationalism was let out f the bottle. Eventually Charles V's mercenary German armies attack Rome,  calling the Pope the Anti Christ.  Meanwhile the Conquistadors were annihilating the Incas. Charles V knows that the gold Pizarro brings back is tainted with blood.   Yet another battle between empires raged in the Mediterranean and Africa.  Charles V visualized a Christian Europe strong enough to repel Islam, which, as he knew, had once occupied Spain.  But is Charles V cursed? Four Spirits appear in his dreams, the first the Curse of the Pope. The second represents the indifference of the French Court. Charles imprisons Francis, the King of France, with whom Charles's own sister Eleanor falls in love. Seeking peace, Charles sets Francis free to return to Paris with Eleanor as Queen. The third fury represents German nationalism, an issue that greatly vexed Krenek himself, who understood the danger that Nazism would bring as early as the mid 1920's. Just as in Krenek's Jonny speilt auf, there's a black man in Charles V, a deliberate taunt at the Nazis. The fourth spirit connects to the king's personal life.  Please see my articles on Krenek's Reisebuch aus den österreichischen Alpen HERE and HERE.

Charles's vision of  Europe united in a new Pax Romana falls apart. The Church resents his power and can't handle the Protestant threat.  Francis proves no ally and breaks Eleanor's heart.  What hope has Charles of beating the Turks when he can't count on fellow Catholics?  Treachery and intrigue everywhere, Moritz of Saxony, Charles's protégé, betrays him by leading  Protestant insurrection.  Even on his deathbed, Charles is taunted by his supposed friend Francesco Borgia. Only Eleanor offers mercy.

Charles was vilified because few understood his motivations, which were ultimately altruistic. "I did not want to make the State a new tin God", he says, . "True unity lies in a belief in the Eternal. Everything earthly is an elusive bond".  Moritz of Saxony sneers that the King lives in a bygone age. But Krenek also adds the phrase "or maybe he lives 400 years in the future". The German choruses chant "We don't want to be citizens of the world!" Wearied and sick at heart, Charles V abdicates and retreats to a monastery.  An Emperor choosing to live like a monk (albeit one with Titian as wallpaper).  Charles V's core values were not those of the petty, selfish world around him.  A Turkish astrologer sees a star disintegrate. "A good omen" chuckles the Sultan. "The people of Europe are free, and they will use this freedom to fight among themselves even more brutally." The dying Charles holds a crystal globe in one hand and a crucifix in the other. He had not dreamed of peace for his own sake, but in the name of God. "But an impulse from within has corroded the globe with venom."  Photo shows Dietrich Henschel as Charles V, in the production by Uwe Eric Laufenberg, who directs the new Bayreuth Parsifal.

For Krenek danger came from Germany. Now things are a bit different but the scenario isn't so far off. Please click here to see my post London Belongs to Me, Richard Attenborough's prophetic film
at July 14, 2016