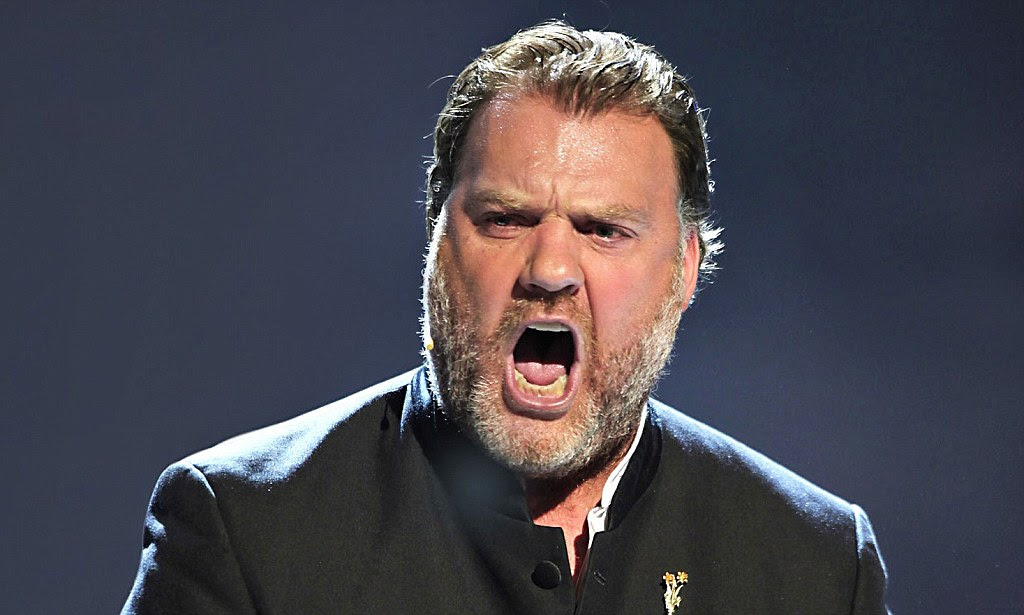 Bryn Terfel, astonishingly persuasive as Boris Godunov, in Prom 2 a semi-staged reprise of the Royal Opera House production this March.  Bad Guys in history fascinate, for some reason, but  Terfel's portrayal suggests that Boris (Godunov, that is) was perhaps more sympathetic than tabloid villain.  Can anyone who can sing with such richness be entirely bad  Haha ! But much of the appeal of Mussorgsky's Boris Godunov lies in the extreme contrast between power and tragedy. Whether the historical Boris killed the historical Dimitri, we shall never know, but the Tsar, despite his power, is haunted.  Terfel's singing is magisterial. so authoritative that that you're glad you're not standing too close. Tsars recognized that a dominant persona was a political weapon.  Yet  Terfel can create such nuance, such subtle shades of expression that he makes you feel close to the "inner Boris" behind the fearsome imagethat  boyars and peasants cannot see through.

A performance as intense and as intelligent as this confirms the merits of the original 1869 version of the opera, almost certainly Mussorgsky's primary interest.  But in Tsarist times it wasn't smart to question the sanctity of Tsardom. The revision thus gave the censors, and the public, what they wanted: circuses and smokescreen diversions.We lose some good music in the process, but there';s no reason why we can't enjoy Boris Godunov as opera and listen to the extras in orchestral concerts where they can be heard without competition from the central drama.

Terfel was supported by excellent singing all round him, if the orchestral playing was a shade overwhelmed in the Royal Albert Hall.  Special praise for Ain Anger's Pimen. The stronger a Boris, the stronger Pimen needs to be to stand as counterfoil. Also praise for the small comic roles, like Varlaam (Andrii Goniukov), Missail ( Harry Nicoll), Dimitri (David Butt Philip) and Yurodivy (Andrew Tortise).  In a performance as intense as this, these characters are important, serving to remind us that the shennaigans of the rich and famous reflect the foibles of human nature on a more humble scale.  Please read the review of the Royal Opera House performance HERE and my background piece HERE.