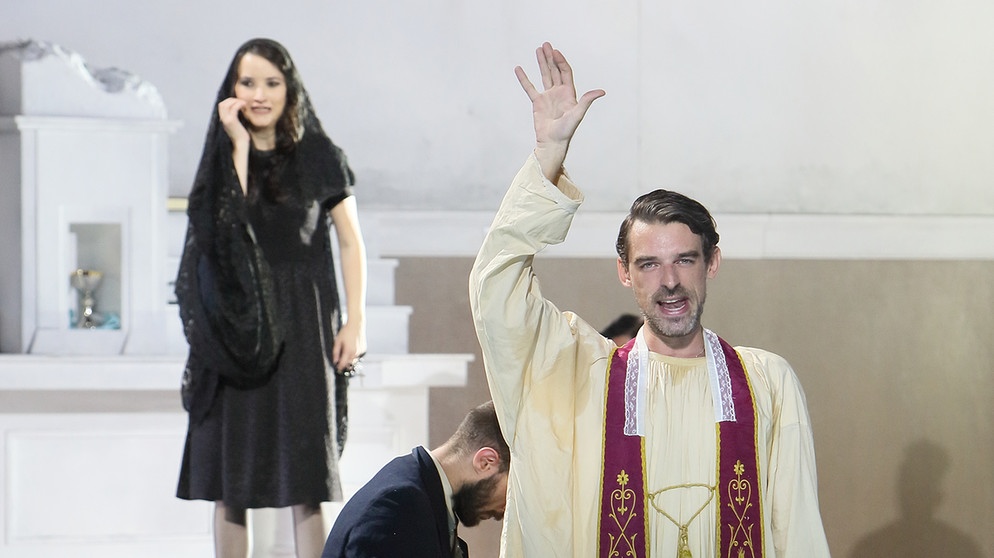 Rameau's Les Indes galantes is shockingly audacious, defying boundaries of time and place with exuberant high spirits.  William Christie's staging with Les Arts Florissants (Andrei Serban 2004) is so stunning that all other contenders are dazzled by its glory.  But Sidi Larbi Cherkaoui's production at the Prinzregententheater Munich, via the Bayerisches Staatsoper and BR Klassik, rose to the challenge, staging it with a different perspective, while also remaining true to the adventurous spirit.  If anything, this new approach confirms Rameau as visionary.  First, be prepared for a surprise.

What are Hébé, L'Amour and Bellone doing in a schoolroom?  But in a classroom, kids learn about the world. And Les Indes galantes is about the world, and universal themes of life and love. Hébé  (Lisette Oropesa) is the "nice" teacher confronted by an apparition in drag. Will Hébé's charges be confused by Bellone, his trumpets and rousing cries of "La Gloire vous appelle" ?  Goran Jurić in travesti isn't exaggerated, though hardly comforting, for he represents opposing systems.  This Prologue, (dramaturges Antonio Cuenca and Miron Hakenbeck)  reaches much deeper than the nudity in the Laura Scozzi production for Christophe Rousset and Les Talens Lyriques in 2014, since it deals with the tensions that underlie the plot, or rather non-plot, reminding us that Les Indes galantes is allegory: entertainment to engage the mind as well as the senses.  Rameau's audiences, versed in the classics, weren't stupid.  In idealized allegory, conflicts are resolved by L'Amour (Ana Quintans).

Brilliantly, the idea is followed through in each of the four Entrées and in the ending, unifying the whole, bringing out connections. The world, after all, is "one", whether you're French, Spanish, Greek, Inca, Turk or Native American.  For example Osman  (Tareq Nasmi) appears in a long tunic over trousers. Not non-European attire, but in these xenophobic times, "alien" outfits suggest danger, even more so, perhaps than they did in Rameau's time. Bellone cross-dresses, parodying the usual trouser-role meme, and pretty much the whole Entrée of 'Les Fleurs' predicates on mistaken identity.  The message is clear: don't judge by superficial appearances. 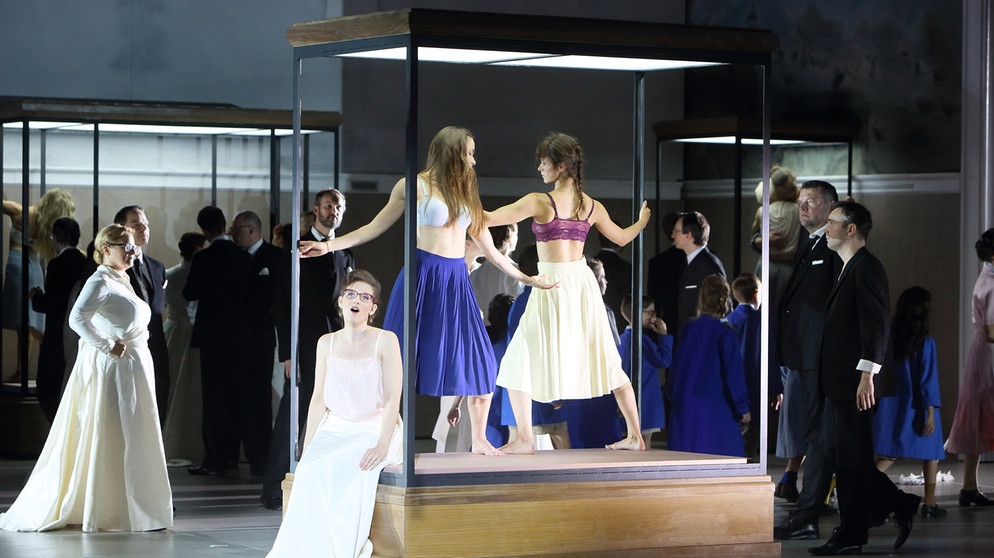 Dance is absolutely integral to Rameau, so this new production is valuable, too, in its emphasis on movement as abstract expression.  In 'Le turc généreux'  singers and dancers move in and out of structures which resemble display cases.  Slave traders? People treating each other as objects of consumption ? Image or reality? The lustful Turk turns out to be the good guy after all, uniting Émilie (Elsa Benoit) and Valère  (Cyril Auvity) so they can go home, where they belong. Despite their differences, Osman and Valère are mates. "Au plus parfait bonheur il a droit de prétendre, Si la vertu peut rendre heureux" 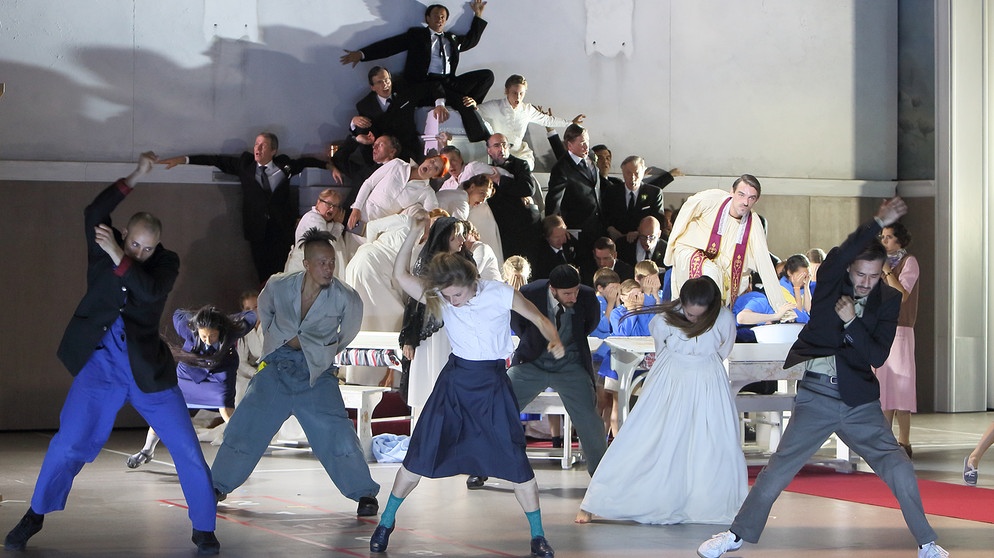 In 'Les incas du Pérou', Anna Prohaska is magnificent as Phani, singing with smouldering intensity, conveying with her voice the conflicts  she must feel betraying her heritage for love. So Huascar (François Lis)  is a Catholic Priest and not an Inca High Priest? Again, it's not robes that make a man malevolent.  We don't need Inca kitsch to remind us that priests of all types are fond of invoking divine retribution on those who question.  And symbols like the sun and blood sacrifice occur in many religions.  Think on that when blaming the Alien Other.  Husacar thinks he has an exclusive hotline to God. "Triomphe soliel" was delivered with suitable fire and brimstone. The volcano explodes but even more explosive was the interpretation. This 'Les incas du Pérou' drew its power from the potent, provocative ideas inherent to the plot.  Rameau might not have dared question the Church publicly, but a whiff of revolt rumbled in the background. exploding in the Revolution which came only 50 years after the opera's premiere. 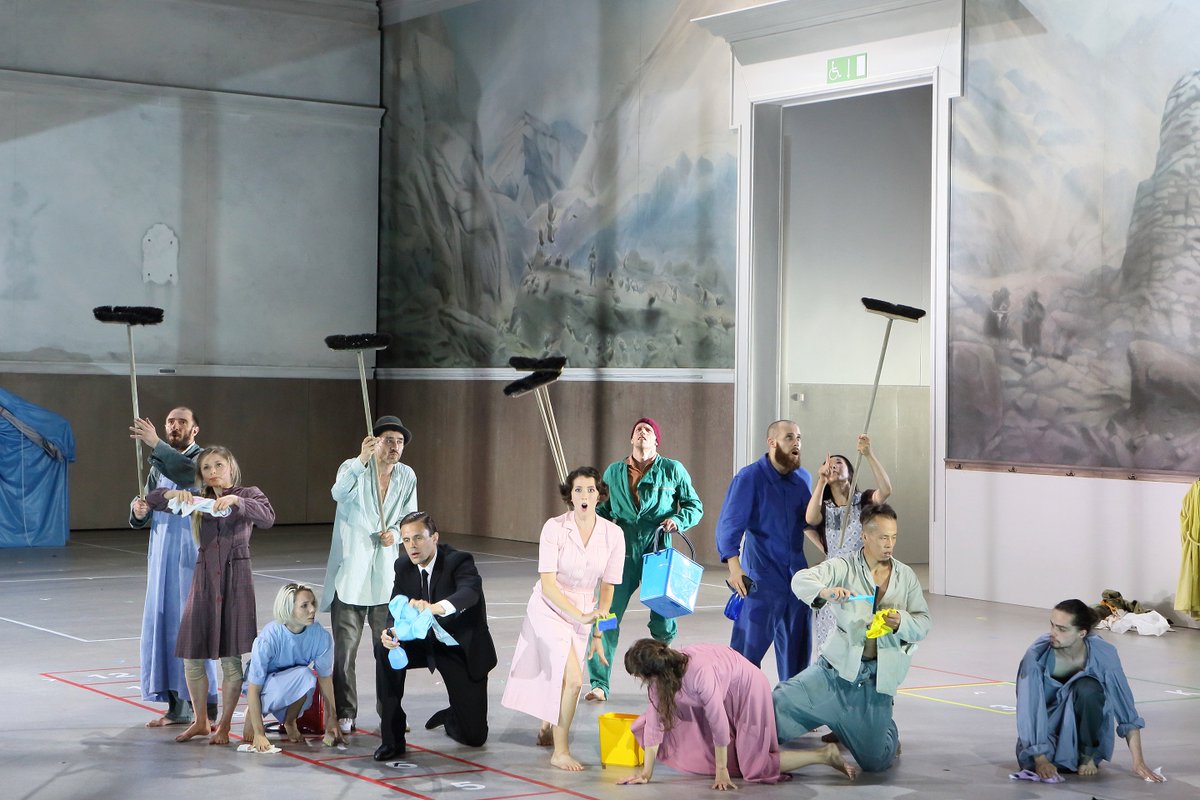 Dance also brought out the deeper levels of 'Les Fleurs', without resorting to prurience or bad taste. The "Flowers" here are the secluded women oif the harem, waiting to be plucked.  Thus the stylized hand and foot gestures, nodding heads and swaying gestures, Middle Eastern dance sublimated.  Tacmas (Cyril Auvity ) loves Zaïre (Ana Quintans) the slave of Ali (Tareq Nasmi ) who is loved by Fatime (Anna Prohaska).  There would have been practical reasons for Rameau to employ the same small group of principals, but interplay of familiar voices also contributes to the sense of disguised identity. The correlation between singing and dancing was particularly lively.   Flowers are fertilized by butterflies, which shift-shape, and whose fragile beauty soon fades. The beautiful "Papillon" aria was exquisite, made even more so when followed by the image, shot from above the stage, where the dancers move in formation, swaying awkwardly like the segments of a caterpillar.  The sub-themes of renewal which connect the apparently disparate parts of  Les Indes galantes are subtly depicted by minor details of cleansing and replenishment which come to blossom fully in 'Les Fleurs'.  Sidi Larbi Cherkaoui's choreography is so vivid that it evolves into directoral thinking, much more effectively than some theatrical directing translates into opera.

Perhaps symmetry comes naturally to a dancer, but the staging of the Final Entrée, Les sauvages connected beginning to end with poise and elegance,  We returned to the "classroom", which isn't at all a bad metaphor for the innocence of childhood, and the idealized simplicity of "natives" living in harmony with Nature.  The wonderful "Forêts paisibles".  Ivor Bolton doesn't conduct with the vivacious finesse of William Christie or even with the flair of Christophe Rousset, but his Handelian solidity works well with the down to earth physicality of Cherkaoui's choreography.  The excellent singing and dancing more than compensate. Cherkaoui's interpretation gets to the soul of Les Indes galantes with great intelligence and sensitivity.  We need more of this, especially in these times.
at July 26, 2016