"The Three Choirs are the Three Choirs Festival", said the Very Rev Stephen Lake, Dean of Gloucester Cathedral, introducing Mahler Symphony no 8.  The combined chorus of the three cathedrals that make up the Three Choirs Festival are the epitome of excellence in their genre. Every Sunday, most Holy Days and at Evensong, members of the choirs of the cathedrals of Gloucester, Worcester and Hereford sing together: no professional choruses can quite do the same. Moreover, members of these choirs sing for the sheer joy of singing, and as a communal celebration of faith.  The Three Choirs Festival is very much "value added music", because performers and audience come together for something even greater than music: a belief in higher ideals and in the Life Everlasting.  Ideal, in many ways for Mahler, a composer whose whole output dealt with the transcendence of mortal life.

Mahler's Symphony no 2 "The Resurrection" features regularly at the Three Choirs Festival, as has his Symphony no 3, but his Symphony no 8 is an altogether more formidable beast.  I've heard it many times live, and nearly always, when it's become unstuck, it's been because the choral forces don't cohere.  No chance of that happening with the combined choirs of the Three Choirs Festival!  Three hundred years of coming together for common purpose does make a difference. Although I've heard many excellent choirs in Mahler's Eighth, never have I experienced more unity and intense focus.   Such sharpness of attack, such alacrity: hundreds of voices singing together with absolute clarity. An ideal balance of voices, not easily achieved with disparate  forces with different ways of doing things. Absolutely, this Mahler 8 will be one to remember for the sheer brilliance of the choral singing. Good music deserves no less.

Structurally, Mahler's Eighth is not a "symphony" and its spiritual cosmology is highly unorthodox. It's a hybrid that defies conventional form.  The first part uses a medieval Latin hymn attributed to  Rabanus, Archbishop of Mainz (c780-856) which describes how Jesus's disciples wondered what would happen to them since Jesus had gone on ahead.  In the Acts of the Apostles, the Holy Spirit descended from heaven upon them in the form of holy flames, inspiring them to go forth into the world, spreading the Gospels. But The Apostles this is not.  Mahler adapts the Pentecost as a metaphor for divine inspiration and, by extension, the mission embraced by a truly original, creative artist.  "Veni, Creator spiritus" connects the spirit of creation with the Spirit of the Creator, who may not necessarily be God in a Christian sense.

At the Three Choirs Festival, it's perfectly acceptable to hear an interpretation of the piece from a Christian perspective, and why not?  Thus the resounding chords of the vast Gloucester Cathedral organ, with its magnificent "personality". Yes! Organs have unique voices and this one is very distinctive indeed. Though organists travel, organs don't, so it does matter when a player knows the particulars of the instrument as intimately as Jonathan Hope does.  Far too often Mahler 8 performances are diminished because concert hall organs are lesser creatures, and even big brutes like the Royal Albert Hall organ don't have the innately warm character of the one at Gloucester Cathedral.  Moreover, at Gloucester, the choruses are used to singing with this organ, avoiding the problems of balance that can happen elsewhere. The natural affinity between this organ and this combined chorus was a wonder to experience, probably not something we'll hear anywhere else.  Even if the "bells" sounded rather too church-like, again, why not? Gloucester Cathedral is a church, so context is perfectly valid.  It seemed that the bells might indeed have been the bells of Gloucester Cathedral itself, a unique touch. 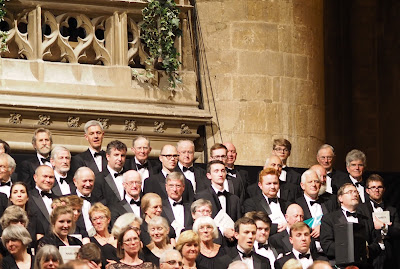 The First Part of this Mahler 8 zipped along with such brio that details were lost, but the glorious choral singing and organ were more than compensation. Indeed, this performance, conducted by Festival Director Adrian Partington, a supremely experienced choral conductor, made me realize just how strongly the choral parts are written. Because so many well-known recordings of Mahler 8 were made by conductors with an opera background, we've become accustomed to listening to the piece as if it were quasi-theatre, assuming the soloists are roles in a drama.  That's a valid way into the piece, but its meaning is far more esoteric and mystical.  So I was delighted that, for a change. the soloists, while good, especially favourites like Hye-yoon Lee and Catherine Wyn-Rogers,  didn't overdominate.

After the tumult of the First Part, Partington observed the pause for reflection before the long, ruminative section where the orchestra sings, not the voices.  Although this section isn't showy and no voices are present, it is critically important to meaning. "Accende lumen sensibus" refers to the concept of light rising upwards linking to heaven, illuminating those it touches, cleansing them of ego, selfishness and petty concerns.  Truly original creativity, like meditative prayer, comes when the pollution of toxic detritus is expunged. Goethe's anchorites live in humble isolation, communing only with  God.  Thus this part is like quiet prayer. It's not an interlude but the soul of the symphony.  Please read my article Mahler, silence, creativity and Holy Saturday.  (click for link) Since Partington is a magnificent choral conductor, I was happy enough that, on this occasion the Philharmoinia Orchestra didn't play with the refinement they gave for Esa-Pekka Salonen, their usual Chief, when they did Mahler 8 in 2014, when some parts of the choirs seemed to be thinking about their chorus masters, not following the conductor.

With the return of the choruses, this Three Choirs Mahler 8 flared once again into blazing glory.  Such wonderful singing banished all quibbles.  In this final section, the Veni Creator Spiritus shone magnificently. The Three Choirs Youth Chorus sounded particularly fresh and innocent, underlining the critical importance in this symphony of concepts of birth and renewal: creativity as continuity of life as well as of artistic regeneration.  Some of the boy singers looked extremely young. I very much  appreciated their vulnerability and piping English accents. Perhaps one day these boys will carry on the Three Choirs Festival's values, whether as musicians or in the audience.

Gloucester Cathedral has the strongest acoustic of all the three Cathedrals, maximizing the impact of this performance. "I could hear the rehearsals" said the Dean, "in my garden".  In a way I was glad to be seated where one of the vast Gothic pillars shielded me from the force of direct impact, so I could hear the music, not just the noise.  This piece was dubbed "The Symphony of a Thousand" not by Mahler, but by a canny promoter who knew that some audiences prefer quantity to quality.  In a relatively small performance place like Gloucester Cathedral, a little goes a long way.  But the choirs were so wonderful, and their enthusiasm so infectious, that I was carried away by the "spirit of creativity".