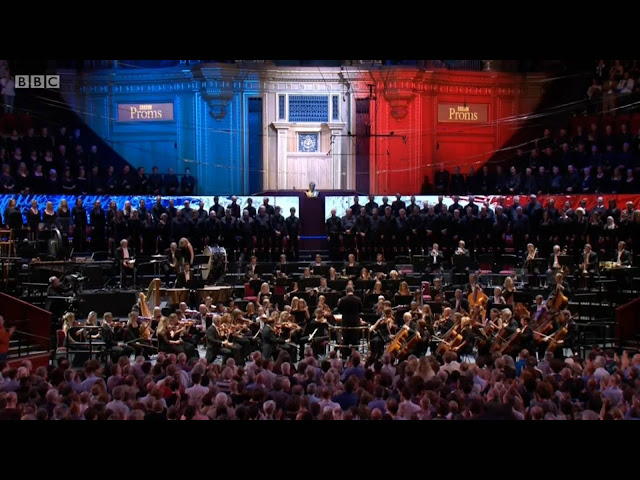 The Marseillaise on the First Night of the Proms 2016, a powerful start to the BBC Proms season, acknowledging the atrocities in France. Most of the Royal Albert Hall audience stood up in tribute.  Terrorism is a global issue even when perpetrators act alone. Nations united are stronger than nations alone. Perhaps that message is lost on some, and the BBC will get it in the neck from vested interests who'd like to replace public services with commercial control, who look for any excuse to accuse the BBC of "bias" real or imagined.  Tonight, the BBC placed humanity above political manipulation. The BBC is a more effective ambassador for British integrity than schemers and selfish policies ever could be.

This First Night of the Proms was obviously planned ages ago, but we cannot but reflect on how it relates to current events.  Music doesn't exist in isolation, and we'd be much lesser people if we didn't care. Hate and division have always been part of the human condition. In Romeo and Juliet, Shakespeare wrote about implacable rivalries, and the pointless waste of young life.  Beautiful as it is, Tchaikovsky's Fantasy Overture ' Romeo and Juliet' would be nothing if we overlooked the tragedy behind  Especially niot after that Marseillaise and the images of dead bodies we've been seeing today.

The image of Elgar as jingoist persists even though from what we know of the composer, the image is far from the truth. Elgar's Cello Concerto is anything but "pomp and circumstance";  it's poignant and deeply felt. It was written after the death of Alice, his wife and muse, but also after the end of the First World War, in which millions of others were killed, not only in war but through famines, epidemics and ethnic cleansing. In those circumstances victory could not but be tinged with sorrow, In any case 1914-1918 was the beginning of a much wider, global conflict that didn't end until 1945, and a radical new approach to ending conflict. Perhaps we should reflect more on the years of idealism after 1945 than on endless squabbles.  In this performance, with Sol Gabetta as soloist, I was particularly moved by the quieter moments, ie the lento, which "spoke" with more depth than a short movement usually gets.

First Nights of the Proms often feature blockbusters, since their size suits the cavern that is the Royal Albert Hall. Prokofiev's Cantata Alexander Nevsky was ideal material, featuring as it does massed forces of a scale that the Soviet Union could produce when it needed to make major propaganda impact.  I've written extensively on Sergei Eisenstein's monumental film Alexander Nevsky and the role Prokofiev's music played in it. Please see HERE and HERE for more.  In this performance, Sakari Oramo, the BBC SO, the BBC Symphony Chorus, the BBC National Chorus of Wales and soloist Olga Borodina let rip with intense ferocity.  Perhaps a little on the wild side, but rightly so, because this is impassioned music.  The Russians under Alexander Nevsky were fighting for their very existence. In 1938, when the film was made, the irony of the plot was not lost.  The Soviet Union didn't trust the Nazis any more than Nevsky trusted the Crusaders.  Although the forces used in the Battle on the Ice were small by modern standards, the conflict was epic, a fight to the death with Nature itself creating havoc. Human history isn't pretty but if we don't learn, we're lost.