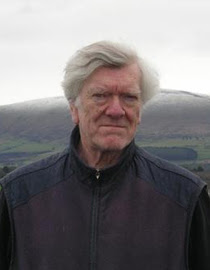 At Prom 15, the world premiere of Anthony Payne's Of Land, Sea and Sky, with Andrew Davis and the BBC SO. A strange, but fascinating piece with clear antecedents in the British choral and orchestral tradition, yet, like Payne himself, utterly individual, even idiosyncratic. A landscape of visual images described in sound, yet also a landscape intuitively felt and interpreted.  It begins quietly, eddying ripples of sound, a woodwind calling us forward, and then the words, "Of land and sea...." from the male chorus and "and sea and sky, and water" from the women. Immediately I felt a sense of confluence, of swirling forces separate yet moving together. "Calling, calling" the voices sing. But in the percussion we can hear the thud of thundering hooves. "Galloping, galloping" sing the chorus. The image apparently is of wild horses in the Camargue, running through waves on a windswept beach.

For a moment the music stills and changes direction. This time bright, clear shards of sound dissipating into smaller, shining fragments.  The voices create swathes of shimmering sound: a pity that diction smothered words but that added to a sense of mystery. Brasses thrust us along swiftly, then tense, pumping ostinato, swept away by trumpets, contrasted with circular pools of resonant sound, swelling and rising like a giant wave. .As an impressionistic piece Of Land, Sea and Sky engages the imagination, which is more than can be said for many works. Phrases such as "like symphony" pop out like signposts in a  landscape of shadows and illusions. (On re listening I think the abstraction increases as the piece goes along : assessing it in  pictorial terms might be a big mistake)  Towards the end, the choruses sing "Of land and sea", but I don't think we're back at the beginning at all.  Like the landscape, something has changed in us, if we've been paying attention.

Ralph Vaughan Williams Toward the Unknown Region (1906-7) reaffirmed Payne's connection to very deep roots in the English tradition, which perhaps spring from the transcendentalist poets of the 17th and 18th centuries, where conceptual ideas - not necessarily religious - underpin expression.  "Walk out with me " wrote Walt Whitman, "Towards the Unknown Region, where neither ground is for feet, nor any path to follow".  Mystical concepts, yet ideas which very much connect to the music of our own times. Luigi Nono, for example, might have understood, given his thing for the blurring of boundaries between land, sea and sky. He'd have got Payne, I think. . In 1906/7, RVW was setting forth, too, leaving behind the stolid certainities of Charles Stanford, and finding his own voice via Ravel. Andrew Davis, the BBC SO and the BBC Symphony Chorus at their finest.

Prom 15 might have been an opportunity for the BBC to explore this strand in music in greater depth. Tchaikovsky's The Tempest actually worked very well, with its magical romance, beautifully realized. But the Powers That Be want Box Office  rather than challenge. Hence Max Bruch's Violin Concerto noi 1 in G minor, which never fails to delight, even in a non-challenging generic performance.  Maybe Ray Chen and his followers are the future of classical music, but folks like me would prefer accounts with more character.
at July 27, 2016