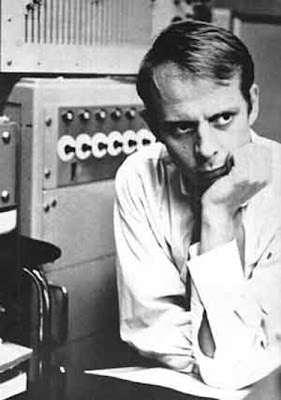 People are drawn to music for many different reasons. Stockhausen might appeal to those who like technology, formulae, ritual and the splitting of fine hairs. But as Mahler said, “the music is not in the notes”. Stockhausen was an obsessive personality but, as this programme showed, there was a deeper vein of creativity in him that subverted the overt control freakery. On paper it wasn’t promising. Two versions of Harmonien, interleaved with two performances of Trans. No wonder so many left at the interval ! Why listen to the same basic pieces repeated ? But that’s the whole mystery Stockhausen presents us with. The music here is not “in the notes” but in the conceptual challenges.

The Harmonien come from KLANG, the 5th Hour in Stockhausen’s monumental traverse of the hours of the day. Anyone sufficiently interested in Stockhausen will know about KLANG, or could look it up: what’s relevant here is that the 5th hour is expressed through a protracted melodic solo instrument and comes in three forms : for bass clarinet, for flute and for trumpet. The same basic melody repeats in different transpositions, with minor variations dependent on which instrument is being used. Significantly all three are dependent on human breathing. Here we heard the versions for bass clarinet and flute. Before the main concert the trumpet had its moment of glory in Michael’s-Grüss, played by Bruce Nockles, the ensemble of the London Sinfonietta conducted by Oliver Knussen. The trumpet featured in Trans as well : like a tightly structured puzzle, the different parts of this programme interlocked neatly. Harmonien for trumpet didn’t have to be “heard” because it existed in the imagination. In any case we heard it at the Proms. (look at the list at right and scroll down to "Stockhausen")

The first five notes of Harmonien evolve into a sequence of 25 notes reiterated in five different transpositions. Jerome Kohl’s notes are so lucid they cannot be bettered. “Each sequence is divided into five segments of from 3 to 7 notes, (3+4+5+6+7=25), each presented at first as a rhythmic motif, then repeated in loops…in even or nearly even rhythmic values”….”these ritornelli result in 3, 5,8, 3 or 21 occurences, fixing these pitch groups into chordal units, the ‘harmonies’ of the title”. Such exactitude might, in theory, make for mechanical performance, but this was most certainly not the case. Suzanne Stevens and Kathinka Pasveer emerged in costumes of pale blue velvet, vaguely channelling medieval musicians : an allusion to time, part of the spirit of KLANG. They moved, too, reflecting in visual form what happens in the music. At one point Stevens played with her back to the audience. A tiny detail, but one whose significance will appear again in Trans. Although the Harmonien are almost identical, this throws more focus on just how individual each instrument and performer really is, quite the opposite to the idea of mechanical, rote playing. Music like this seperates true musicians from drones. Stevens and Pasveer were communicating a lot more than "just the notes".

The two Trans are even more intriguing. Again, the visual element is important. The orchestra sits facing the audience full on, double basses even spaced on either side, which throws awry the way we usually hear. Yet it’s not confrontation: a gauze screen separates the players and those who are being played “to” – or is it “at” or “with” ? The screen veils and distorts. The whole stage is bathed in a red glow. This is a David Lynch movie, but it was created in 1971, long before Lynch made movies. The setting has the portent of a strange, fevered dream, whose meaning seems profound yet is utterly unfathomable. We see only string players, yet we hear a smaller ensemble of winds and brass, and the harsh mechanical sounds of what seem to be blocks of wood and metal beaten together. These are in fact recorded tapes of a shuttle in a loom. Stockhausen is weaving, pulling the threads of the music together, marking changes of direction with the loud mechanical thwack of the shuttle as it hits the edge. In the foyer there's an installation which lets you "weave" different coloured threads on a grid. By the end of the evening it was completely filled.

Snippets of Ravel, Stravinsky and Schumann are woven into the piece, too, as familiar points of reference which disappear before they can quite be grasped. At various points individual musicians are drawn out of the mass : a trumpeter climbing a ladder in the background (the only visible non string player), violinists who stand up and play weird disharmonies, and most memorably a music stand that’s wheeled on stage, causing a cellist to suddenly break ranks and play what’s on the stand. As the stand is removed, he tries to follow it to keep playing, When it’s gone he sinks back into the mass.

“All that rigid conformity, yet the unruly individual can’t be repressed !” said my ever-perceptive companion. Indeed, what the strings are playing are unnaturally slow extended figures, Indeed their functions seems almost more ritualistic than musical. Their arms move slowly and diagonally across their bodies, lit up white with an eerie glow. The music wavers vertiginously : the musicians heads flop from side to side. They are automatons, collapsing like a pack of cards ! Suddenly all sound is sucked into nothingness, and the players are caught freeze frame for so long the wait itself becomes unsettling.

Why two Transes when one might suffice ? Yet this seems to be the point. There is so much lazy, inattentive listening these days that Stockhausen is making a valid point. Again, it’s like studying a puzzle, a “Spot the difference” picture where you have to be alert. Perhaps hearing the first transverse of Trans sets out the premise, so it takes less time to absorb it second time around. Who knows ? It's definitely part of the experience. With Trans, we’re getting close to the wacky humour of Mauricio Kagel (who made movies), the psychoacoustics of Gérard Grisey and to the “theatre of sound” of Heiner Goebbels.