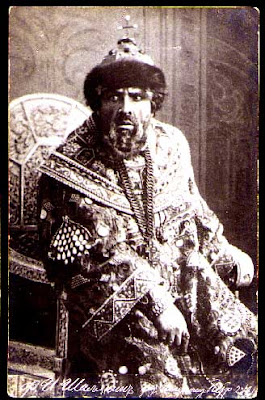 This isn’t the “usual” Boris Godunov we know and love, but the 1869 original. No Polish scenes, No Princess Marina, no . It may be “pure” Mussorgsky, but the composer and Rimsky-
Korsakov had good reasons for revising it. Nonetheless, this is much more than a curiosity because it highlights the fundamentals of the plot, rather than letting us luxuriate in highly-coloured histrionics.

Strangely enough, it feels closer to the spirit of . Tim Albery makes the implicit connection between medieval and modern. in “The Time of Troubles”, even for the wealthy was more spartan than the colourful images we see in books and paintings. That’s why the Tsars and the Church were able to overwhelm the peasants. Their authority was built on being able to dazzle the serfs into submission. No wonder the peasants are terrified that somehow the world will collapse if they aren’t dominated by a Tsar. Of course their piety is enforced by police brutality, but the confluence of credulity and servitude tells us something about totalitarian regimes. If people want to believe, they’ll believe anything. This is why False Dimitris figure so much in Russian history. An old man claims his blindness is cured by visiting the grave of the murdered Tsarevich. The dead child becomes a saint and thus connects to the power of the Church. It isn’t rational, but it scares the wits out of Boris. So much for his hold on power. No wonder he has to die.

That’s why this production works so well. It’s firmly centred in the barren greyness in which peasants live. The opening scene, with its huge, oppressive beams hanging over the crowds, is claustrophobic, a symbol of their oppression. The new Tsar walks past, in an elevated cubicle, as distant from his subjects as a dream. Yet the masses acclaim him as though he were a god. No wonder communism had such hold for so long. No wonder the Rimsky-Korsakov version was preferred by the authorities.

This version reveals the significance of the cell scene. The monk Pimen may not be as attractive theatrically as a diva with a stunning aria but he is the witness of time. Pimen may be frail, but Boris realizes that he cannot escape the uncompromising judgement of history. Brindley Sherratt doesn’t sound old, but he portrayed the true nature of the role all the better by quietly forceful delivery. Sherratt’s dignity is such that it also brings out the irony in the scene, where the drunken monks carouse. Varlaam (Jonathan Viera) is more than comic relief. He represents the ugly reality behind the surface glamour of the Church/State power structure. That’s why False Dimitris are so dangerous. Gregory Turay as Grigory seems a beacon of hope in contrast. It’s interesting that Albery places the one truly vivid blaze of colour with the Innkeeper. Yvonne Howard’s costume (designed by Brigitte Reiffenstuel) is a visual riot, a flash of uninhibited vivacity. This is costume making a statement : the peasants may be oppressed but their folk culture is irrepressibly vigorous. Despite their wealth, the robes of the Royal household are more muted and formal. It’s a telling insight which can be obscured in more conventional, opulent productions.

The central role, however is Boris Gudonov himself. He’s power-crazed enough to have murdered a child, yet years later is consumed by remorse. Psychologically this is shocking stuff, and many of the great Gudonovs of the past have played the intensity to extremes. Perhaps Albery wants to bring out a more civilised, human side in the role which is certainly valid. The tenderness Boris feels for his children contrasts with the murder of the Tsarevich. But it would have been impossible for Mussorgsky or Rimsky-Korsakov not to show the Tsar in sympathetic terms. They’d have been murdered or exiled themselves. This creates an emotional minefield. It’s such a complex part that playing up the extremes is perhaps a relatively easy option. It’s Peter Rose’s first Gudonov, so he may grow into the part and explore its depths. On the other hand, it fits nicely with Edward ’s conducting, which underplays excess where more intensity, too, would have enhanced the raw power in Albery’s vision. Another advantage is that this Boris doesn’t overwhelm the other parts. Prince Shuisky, in particular, is given more weight. He wasn’t just the stock villain of legend. John Graham-Hall’s strong, unfussy portrayal shows that it’s Shuisky’s tragedy too, for Russian audiences knew what happened to him after the story in the opera ends. As for the ending of this production, that’s a puzzle. Despite the funeral bells in the music, Albery has Boris walk off after he dies. This can’t be accidental. Although I don’t understand, it’s a tantalising mystery that makes you ponder long after the evening ends.

Link with production pix to come