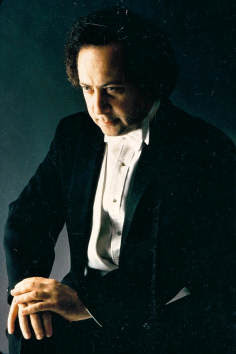 On Tuesday, José Serebrier made one of his sadly too rare London concerts. He has made over 200 recordings, some of which are "best in class", superb. Currently I'm enjoying the latest in his Glazunov series. Highly recommended !
Serebrier's life is absolutely amazing. He started conducting aged 11 in Uruguay, organizing his own orchestra, the first of its kind in South America. They were so innocent they thought they "had" to play by ear and memorized everything ! At 17 he wrote his First Symphony and by a stroke of quite miraculous coincidence it came to the attention of Leopold Stokowski, who hired Serebrier on the spot and premiered the piece in place of Charles Ives's Fourth, then considered too difficult to perform. Of course, Stokowski and Serebrier eventually cracked it, and Serebrier's 1974 recording is a wonder. Serebrier was close to Stokowski for many years, but also worked with Monteux and with Georges Szell. He's also a composer of some note. What I like about his work is that it's so intelligently organized and constructed. Get the fundamentals right, then add flair and sparkling vivacity. His finest work, like his Shostakovich, Dvorak and Janacek is inspired. There is so much in his fascinating life that I couldn't possibly do it justice in a short blog like this. So please look at his website and at the interview below. Look especially for the video clips on the website - amazing !!!!