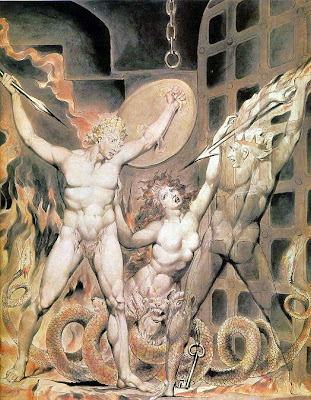 This spectacular performance of Lucifer’s Dance from the opera Saturday in the LICHT cycle was the crowning glory of the excellent Stockhausen festival at the South Bank.

Lucifer, the devil, wants to stop time, is thwarted, dies and is resurrected. So his next plot for world domination involves a ritual dance based on tics, contortions and grimaces. Of course it’s off the wall, but that’s why Stockhausen is fun. The orchestra is arranged symmetrically in the shape of a face. Four silver tubas form one eyebrow, four golden horns the other. When they move, they make the face wink. Wacky as it might seem, it shows how Stockhausen visualises sound as a pliable mass. The orchestra becomes a bizarre kinetic sculpture, each musician a component is the writhing mass of noise and movement. Music takes shape, in every sense !

Lucifer walks on dressed in circus master guise. The vocal line is “sculpted”, too, not singing so much as guttural groans and waving wails. Nicolas Isherwood, the bass, could make a name for himself in the genre, often called ”extreme vocalism”. Lucifer’s recitative, (for that is what it is, strangely enough) goes through ten sequences. Each time he calls out a facial contortion, the orchestra acts it out. The musicians bend, pointing their instruments downwards. Others hold theirs aloft, and of course, they twitch from side to side with exaggerated diagonal movements. It’s as though there were invisible muscles pulling back and forth. In fact, much of the time they aren’t actually playing. One percussionist does a kind of morse code. Only one in five beats hit his gong, sometimes it just vibrates from air turbulence.

The music shifts shape, too. “Tränen !” (tears) shouts Lucifer and sagging diminuendos emit, filtering down from the second row below the brass, the “eyes”. When Lucifer calls on the nose, the rock band drummer in the middle, beats a series of snorts. Sometimes the winds “blow” short of their instruments, creating odd gasps and exhalations, sometimes they shout forcefully into them. Orchestrral groups function like muscle groups., twitching in unison, forcing other groups to react. Marco Blaauw, often heard with the London Sinfonietta, walks on with trumpet mutes strapped round his waist. He’s Michael, one of the main figures in LICHT, who, like the angel Michael, confronts the Devil. His duet with sound projection is a duel, with sound as weapon. A ninja-like piccolo soloist emerges, dancing freely, unconstrained by the gyrations in the orchestra. Lucifer counts the hours. He reaches 13 ! The music explodes. Crazy as it may seem, Lucifer’s Dance has a bizarre logic of its own. It involves “un-learning” conventional attitudes to music, so it’s particularly good to hear it played by student orchestras like this : they won’t forget the experience.

The festival started with Michaels-Gruss (Michael’s Greeting) for solo trumpet. Now it concluded with Michaels-Abschied (Michael’s Farewell), Five trumpeters stood on the roof terrace of the Festival Hall, playing an intricate relay of long, solemn lines, interspersed with silence. The sound reach upwards and outwards, across the , into the cityscape, lit up by millions of lights, like the stars the composer identified with. Gradually, sound fades into the sounds of traffic, into infinity, into the cosmos. Stockhausen doesn’t just sculpt sound with music. He uses the whole environment.

Thanks for the great report. It's worth mentioning that the movements are asked for in the score. As you say, "It involves “un-learning” conventional attitudes to music", but it also asks to "re-learn" one of the fundamental early roles of music: enabling the dance.
On a side note, I assume there was no strike this time, but in the complete staged version of the opera, the dance is interrupted by a strike of the musicians... Pure Karlheinz Stockhausen.

Hello ! Great comment ! This wasn't staged and they left out the musicians strike but it was very effective anyway. All week we had different parts of KLANG and LICHT so the whole festival took on a life of its own, creating patterns and ideas - very original. It was put together by Oliver Knussen.