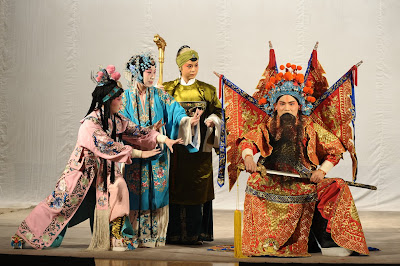 "Exquisite Beauty: The World of Kunqu is an unprecedented large-scale Kunqu promotion programme in Hong Kong. A series of six demonstration talks on different themes will be conducted at respective tertiary institutions from the 4th to 15th November 2008, while six performances will be staged at the Jockey Club Auditorium of the Hong Kong Polytechnic University from the 18th to 23rd November 2008 to showcase a variety of Kunqu repertoires. Mobilising over a hundred members from the troupes, including eminent artists and reputable masters".

“Exquisite Beauty” best describes the art of Kunqu — its refined language, elegant movements, and regard for tunes and voices. Calling himself a “Kunqu enthusiast”, Professor Hsien-Yung Pai was deeply attracted to this oldest form of existing Chinese opera since his youth. In recent years, he has been actively involved in revitalizing this art form, leading to his accepting the invitation as the honorary chairman of the “Research and Development Project on Kunqu” at The University of Hong Kong in October 2007."

Western people really miss out on the riches of Chinese culture. There's a lot more to it than they realise ! How much could be learned ! One of my dreams is to share the beauty of Chinese music and art. PLEASE look at the labels on the right of this blog as there are several articles about Chinese opera, including the most comprehensive description in English of Peony Pavilion.

For more details, following the links on the right of this blog and look at:
http://www.rhfamilyfoundation.org/en/press_room/press_releases/kunhk/2008-10-02
Click on the link to HKU which is in Chinese but many who follow this blog can read Chinese.
at November 05, 2008