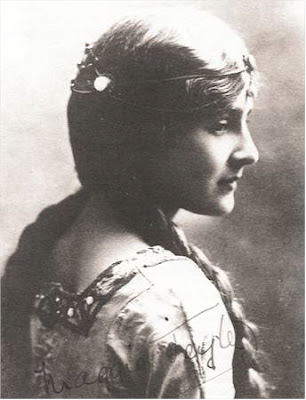 There’s hardly any stage space in the Lilian Baylis Theatre at Sadler’s Wells, and the audience seats are so steeply raked that it’s claustrophobic. But claustrophobia is central to the plot. This set, by Madeleine Boyd, uses horizontal plinths which bear down oppressively. Wings, rafters and mechanics are fully visible, a striking illustration of life in this castle, which is repressively formal, organized like an industrial machine. Allemonde is not a happy kingdom. This set reminds us that dungeons and subterranean passages lurk below, Maeterlinck’s metaphor for the subconscious. We catch brief glimpses of the servants who make the edifice function.

This too, is an integral part of the plot even though the roles are silent, for Allemonde is kept alive by scores and scores of underlings who serve in suppressed anonymity. Remember this, for it’s important and pertains to the “surprise” ending this production reveals ! Arkel and Geneviève can’t even walk freely at first but are propelled by machines. When Mélisande enters his life, Arkel can suddenly walk again, albeit with sticks. Geneviève’s costume (also by Boyd) is a statement in itself, a bizarre contraption that makes her look like a piece of ornate Victorian furniture. Her skirt is like a cabinet, brightly polished but strictly compartmentalized. It’s a symbol of the alienated rigidity which Mélisande’s presence shakes to the core.

Independent Opera productions sell out fast, but the company can’t afford really big name singers. Instead, it seeks out the best new talent. Several careers have flourished as a result. The singers here certainly aren’t unknowns, but chosen with care. Andrew Foster-Williams has appeared internationally, at ROH, ENO, WNO and Opera North. He’s vocally very assured but even more interestingly, he gets unexpected depths from Golaud. This production is unusual because it explores the relationships between the men.

Golaud’s emotionally retarded, with a history of clumsy relationships. Foster-Williams makes Golaud’s sexual interest in Mélisande very clear. This adds to the suppressed aggression beneath the surface calm. When they'd met, Mélisande had cried "Ne me touchez pas !", but all Golaud can do is touch her. This Golaud is a man who expresses himself violently because he can’t deal with complex emotions. One of the most striking images in this production is when Golaud strokes Pelléas tenderly and combs his hair. It’s a charged moment. It's not erotic so much as Golaud trying to understand "normal" feelings in his inept way, feelings he knows come naturally to his brother. This is a fascinating characterization, supported by the tenderness that wells up in the music, which speaks for him what he cannot express in words.

This Mélisande, too, isn’t a pallid victim, but, portrayed by Ingrid Perruche, a sexually vibrant woman. Maggie Teyte, one of the great Mélisandes, said that in her time “the characters were so STRONG (her emphasis)……modern performers (in 1958) have taken out all the blood”. She may be mysterious, but she’s a creature of instinct and feeling, who dares push the boundaries. That’s why she leans, dangerously, over the well (significantly called the Fountain of the Blind) and loses her ring. No wonder Pelléas is both terrified and attracted. Vocally, she has enough richness to bring out the sensuality in the part, and visually, she’s voluptuous. The "Rapunzel" scene with Mélisande’s hair, symbol of erotic power, is almost impossible to stage literally, so it’s hinted at in this production obliquely. Perruche’s hair is long enough, wildly curly and free. In the tower scene, Pelléas follows a golden thread. It’s simple but conveys the musical imagery well. It’s strong, yet fragile, and could snap at any time. Later, on her death bed, Mélisande is covered by a silken blanket in exactly the same shade as her hair. It’s a beautiful detail, implying much about the mystery that surrounds her persona.

Thorbjørn Gulbransøy as Pelléas is convincing as a lover because he can convey Pelléas as a full personality, who can stand up to a strong Golaud. His is a beautiful voice. He’s young, he has good experience and potential. Frédéric Bourreau’s Arkel was extremely well developed too. Although he’s old, he’s mentally sharp, and understands subtleties Golaud can never grasp. He’s seated in a wheelchair, but the voice that arises is steady, firm and clear, drawing attention even when he’s silent – a counterpart of sorts to Mélisande herself. Indeed, Arkel comes into his own in the deathbed scene, where Golaud crumbles. Bourreau gives us a glimpse of what Arkel might have been in his prime, expanding the character by the depth of his portrayal.

And the “surprise” final scene ? As Mélisande breathes her last, four of the women who have been working in the shadows all along appear. “Who has summoned them?” cries Golaud fearfully, but no-one knows. No longer are they mere servants, barely seen. Now they stand around Mélisande like dignified Angels of Death, profoundly powerful and moving. Golaud is an emotional illiterate because he’s like Allemonde as it was, a clockwork mechanism operating on auto pilot. Does it mean change ? These women represent another way of being, more attuned to Mélisande, and they defy the King. Does it mean change ? We know that outside the castle the populace is starving, ready for revolt.

Even the sickly baby materialises as a little girl. Mélisande says “elle va pleurer aussi”, but that could mean many different things. Perhaps the girl will grow up and repeat the mysterious cycle ? Small as this detail may be, it’s an important because it reminds us that we still have no idea where Mélisande came from or who she really was.

Further evidence of Independent Opera’s flair for innovation is the orchestration. This was a specially commissioned instrument version of Debussy’s score, made by the composer Stephen McNeff. Since Debussy’s music is exquisitely detailed, it was a daunting proposition. McNeff was struck by the way Debussy ”creates a constantly moving soundworld by layering and doubling, adding and taking away”, not so different in spirit from chamber music. McNeff reduced the numbers to 35 from 50, keeping the central solo parts intact, so what we hear captures the essential quality of the original. It also means that this opera can, in future, be performed in smaller theatres. Yet again, Independent Opera thinks outside the box. That’s why it’s worth paying so much attention to.

Unfortunately I have not seen this production, and clearly it is a great success, and the company is to be congratulated. However there are a couple of points in your review which need correction -you suggest Independent Opera lacks money: in fact it is supported at a very lavish level by a single patron, and can spend money on a production and its training far in excess of (I suspect) all other companies of comparable size. And Independent Opera does not exactly "sell out fast" - the company has a very effective PR process which means that a very large proportion of seats are allocated by invitation - to critics, promotors and the like.

There are a lot of small companies who envy Independent Opera's success. Good work brings out inordinate jealousy. But the fact is, this is an exceptionally talented, creative team. They deserve all the support they can get. So what if they have sponsors and good PR ? That is what the business is about. None of this detracts from the fact that they are extremely able and creative. Realistically no small company can survive without help. What's more this company makes a big committment to helping others, through its student scheme. This company really is leagues ahead artistically, so we all benefit from supporting them. That's far more important in the long run than pettiness.