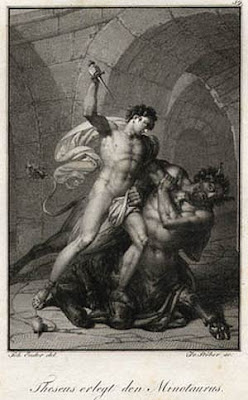 "Between most and least, between man and beast, ...next to nothing". As the Minotaur dies, the small boy within the monstrous frame is released. The mighty John Tomlinson becomes a frightened lad with stumpy, childlike legs, singing a broken lullaby.

Now that the DVD is out it's nice to revisit the experience in memory. Read the link below for a detailed description and great production pix !

"This clew is your clue” intones the Snake Priestess, translated by Hiereus. The clew is the string that will guide Theseus through the labyrinth. In an opera teeming with multiple images and meanings, it’s a surprisingly direct pun since the clue to The Minotaur is perhaps, also to follow the thread as it develops. The labyrinth is a “place with more dead ends, more flaws and fault-lines than the human heart”. No wonder Birtwistle has spent so many years exploring the mysteries of ancient myth : the possibilities are endlessly intriguing. The Minotaur is a work of depth and maturity, “It’s as if he’s writing from his soul now”, says Andrew Watts, who plays the Snake Priestess. “He has no need to prove anything, he’s writing for the sake of writing”. Indeed, the music in The Minotaur flows as if welling up from deep sources. During the toccatas, an image of an ocean swell is projected onto a screen on the platform. Like the waves, the music pulsates, surging with power that comes from deep forces within. To achieve his mission, Theseus has to go below the surface and confront what is within, as should we all.

"Superficially, the plot is gruesome. The Minotaur, half man, half beast, feasts on human blood. There’s no escaping the gory circumstances of his conception and birth, which Ariadne graphically describes. But yet again, surface appearances deceive. The Minotaur may roar, but there’s nothing crude at all about this music. It oscillates, endlessly reshaping itself, tantalising yet ever lucid. Birtwistle may use archetypes, but they resonate musically as well as psychologically. Paradox is central to this opera, operating at all levels and The Minotaur is half-man, half-beast. Duality could not be more explicit."...........

"Implicit throughout is the presence of the Oracle. The Minotaur himself refers to it, for the oracle dictated the creation of the labyrinth. The oracle is thus the real turning point in the drama. Omphalos is the centre of the world, the Snake Priestess a direct line to Zeus. Again, this is a Birtwistle paradox. The scene may be barely ten minutes long but it’s pivotal. This is where Ariadne gets the thread which Theseus needs to escape the labyrinth, but in order to get it, she needs to face her own inner demons. Where murky darkness obscures the set in other scenes, the Snake Priestess is bathed in chilling light. Here there’s no room for anything but pure, unadorned honesty."

"The Snake Priestess, as conduit to the Gods, is supremely powerful and it’s significant that Birtwistle wrote the part for the countertenor Andrew Watts. The Minotaur is half-man, half-beast, while the Snake Priestess looks like a woman but sings like a man with an extremely high register. Like the Minotaur, she sings without words, her long wavering lines intoned like an incantation. Yet again, ambiguity and paradox is at the heart of this opera : singing without words places more emphasis on listening to the sound on a deeper level. Once more, Birtwistle’s writing for the part fits the idiosyncrasies of Watt’s voice so well that, although it’s a technically a challenge, it doesn’t impose unnatural strains, but unfolds as if it were a strange, living thing on its own."..............