Dr Atomic at the Met 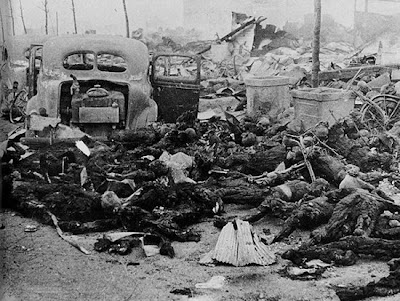 Bruce Hodges on John Adams Dr Atomic at the Met which will be seen in London at the ENO next year:

"Somewhere in this well-intentioned study of the nail-biting hours leading to the test of the first atomic bomb, there is a transcendent experience that this production did not quite reveal. And as a fan of John Adams, I was curious enough that I saw it not once, but twice"........" "The basic premise is meritorious and worth exploring: getting inside the head of J. Robert Oppenheimer and his colleagues in Los Alamos, New Mexico in June of 1945, during those uncomfortable final hours before the bomb test. ...."

"But the libretto, flickering with possibilities, ultimately kept me at a safe distance. At least as seen here, the opera seems largely about "the banality of waiting around." I empathize, but as a listener I don't feel the need to travel the same journey. And some scenes seemed hungry for a director's ability to clarify and amplify—to help focus our attention on what in this story is important. Often large groups of people are milling about, working on something related to the impending test, but it is never clear why, or why we should care."

"Given the number of times Doctor Atomic has been produced already, goodwill is clearly on the creators' side. Much of the set, by Julian Crouch (whose work was also seen in last season's Satyagraha) is enticing to look at, such as two massive blocks of cubicles—three rows of seven on each side—in which singers can pose, sometimes in gripping images: in the second half, a row of bodies appear flung to the walls, stuck upside down or at strange angles. White shades, when drawn, allow animation to be projected: maps of Japan, equations on a blackboard, and the endless, relentless rain."