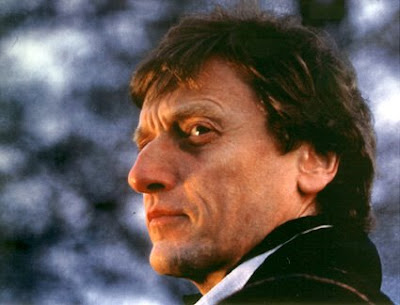 Anyone within reach of London should try to make the FREE South Bank early evening concert on Sunday - Gérard Grisey's Quatre Chants pour franchir le seuil. Barbara Hannigan the Germany based Canadian singer, a specialist in this repertoire, sings. This for me is one of the truly great song cycles of the last 50 years, but it's extremely different. Grisey was interested in "psychoacoustics", which sounds terrible, but all that it means is how what we hear affects how we feel and vice versa. A lot of his music seems attuned to natural body rhythms, which is why it's so amazingly therapeutic without actually being designed that way. Hippie stuff this is not ! It's mentally challenging because it needs careful attention, but somehow it connects to your pulse, your soul and is as natural as breathing. Often I play this music on continuous loop, so it "evolves" like a living organism.

Quatre Chants refers to the idea of "crossing the threshold", between life and death, between struggle and sublimation, a flux between levels of consciousness. It works like deep meditation, releasing the soul so it can be free. Shortly after it was completed Grisey died suddenly. Crazy as it might seem, when you listen to this it "feels" that he has merely passed into a different plane, as we all will. No surprise I often think of it as "Quatre Chants pour fraîchir la seule".

It starts with long semi silence then suddenly waving chords enter, not discordant, but disjointed, This isn't firm ground" but exploratory. "De....qui....se....doit....." sings the soprano, vertical sounds over the hazy horizontals around her. Gradually the patterns merge, the Voice part disintegrates and reforms in abstract, transcended form, soaring like an arc, stretching outwards into space. Then the incantation, based on sacred Egyptian texts instructing the soul on its journey from death to immortality. The texts are fragmented, and the music hovers as if intuiting the gaps in the transmission. Each stage in the ritual is numbered and intoned, for what's even more important than the detail is the sense of inexorable forward movement. "Laisse moi passer, laisse moi passer"....then "formule pour être un dieu"'.

More wonderfully shaped moving sound, deep timbred instruments like contrabass clarinet, muted tubas and trumpet, contrasted with the high voice. "Le voix s'épand dans l'ombre". Only the rumble of drums like distant thunder and barely perceptible rustling, hurrying sounds like wind. We're crossing something..... Circular arching trumpet sounds, more rustling, speeding up, punctuated by sharp thwacks on percussion and harp. Then waddling tuba and screeching (but harmonic! ) saxophones and clarinets. We enter a new place, vivid with clear light. The soprano's singing text from the Epic of Gilgamesh. This is the "death of civilization". Human bodies have turned into a vast sea of clay, but to the prophet, it's a terrace open onto an endless horizon. The violin part is painfully beautiful, and there's a steady hum vibrating in the background. Of the final Berceuse, Grisey said it's not a lullaby but "music to the dawning of humanity finally liberated of its nightmare".

This is more new music on this blog than most on the net, so please keep reading and coming back for more. Check labels ion right for more on Grisey, Murail, Vivier, Messiaen, Scelsi, Sciarrino, Stockhausen, Boulez, Carter, Xenakis and many more. Also new music at the Proms 2009. There's also a detailed post on Les Espaces Acoustiques.
at November 29, 2008