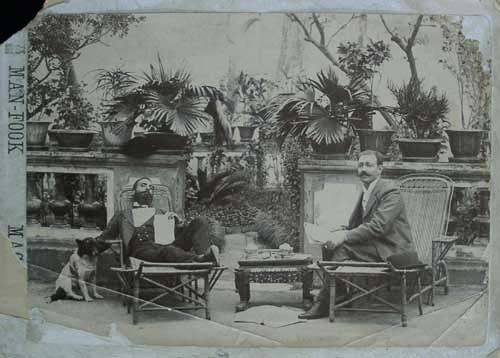 Lone, incessant the sound of a flute weeps/ Widow graceful, in the dark tranquil/ - lost voice seeking exile from others/ - garlands of sound hiding the hour.

And the orchestra? Kisses?  Night outside, cautious, holds everything/ Modulate solo plays the mournful flute/ who to release it? Who to know the pain without reason?

Lone incessant the sound of a flute weeps

Camillo Pessanha (1867-1926) poet of Macau
"Flower Boats" were barges where women sang and played music while men fooled about - a bit like brothels but not so blatant. So the "widow" is a woman who has fallen on hard times, sold into servitude.Pessanha is an interesting man because he strove to cross cultural borders. He went to Macau  where he made a living teaching school, but made a life  as an aesthete. He learned Chinese well enough to read the Classics and write in Chinese, and married a local woman, with whom he had several children. They lived in a small house off Praia Grande. He collected Chinese antiques, but I've seen the photos. Genuine of the period, but not outstanding, as he was not wealthy. He also "went native" to the extent that he became addicted to opium, Think Baudelaire,  and other Europeans who dreamed of exotic places and sensations. There were other Portuguses who did similar things, including a man who lived in Japan and immersed himself in Japanese culture, a great friend of Pessanhas's. I'm not sure who the other man in the photo is but he looks too brown to be European, possibly local Macanese who were a completely mixed race community with customs and langiuage of their own. Pessanha and his son used to fight publicly, but the son died shortly after he did. They're buried together in the cemetery of St Michael in Macau. When I was working in the Macau archives (studying the theatre where Benjamin Britten sang on his visit to Macau in 1957),  I knew Pessanha was buried almost on the other side of the wall, and kept wanting to visit. But it was 35 degrees  C, I was in a hurry and tired and didn't stop by.