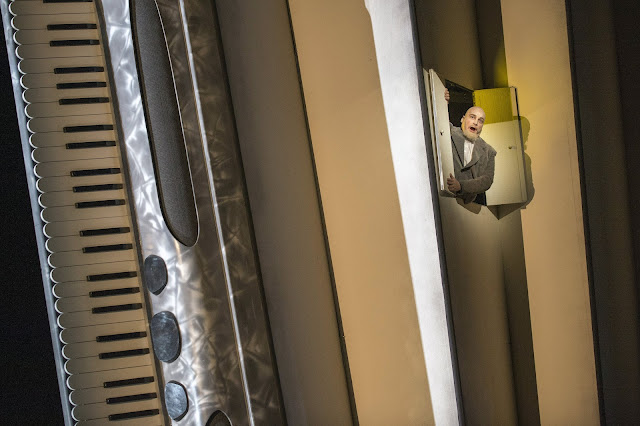 The ENO gave the British premiere of Bohuslav Martinů's Julietta many years ago, so this new production was eagerly awaited. But what will audiences new to Martinů get from this production? It's a myth that the English language makes opera more accessible.  That just means audiences focus on words, rather than really listening or understanding.  Martinů's Julietta is a highly conceptual opera, with deliberate ambiguities and mind games. Just as in dreams, there are clues and contradictions. If ever there was an opera where listeners had to keep alert and pay attention, this is it. The opera predicates on dream states, but sleepwalking through Martinů's Julietta isn't wise. 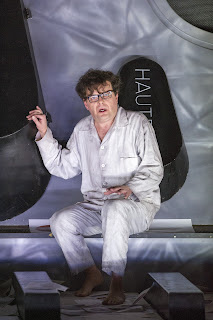 The production dates from 2002 when it was first seen in Paris. The Overture opens to images of sleeping figures floating in space (or amniotic fluid).  One figure emerges, Michel Lepic (Peter Hoare), bookseller by day, dreamer by night. The main set is a giant mock up of an accordion, which also serves to suggest the walls of a house from whose windows various characters appear at critcial points in the opera.  Musically, this is perceptive, for Martinů writes an evocative solo for accordion into the first act, and the mechanics of  the instrument suggest "lungs" or breathing. Accordions also evoke folk music, and thus memories of the past. A horn player walks round, his music evoking other, more sophisticated memories, offereing hope to those who have lost the past.

In this strange dream village, no-one can remember anything of the past. Nothing connects. If this is a landlocked European village, why is there a ship? Where do the Old Arab (Gwynne Howell) and Young Arab (Emilie Renard) fit in?  The implication is that without memory, we're eternally adrift. It is significant that Martinů returned to Julietta at the end of his life, after decades of wandering through Europe and the United States.This gives the opera emotional depth, and is important to interpretation. As a musician, Martinů was sensitive to the power of music, where small snippets awake vast rivers of memory, so the many references to other music are deliberate. Even if some are barely more than wisps, their embedded presence is part of the meaning. 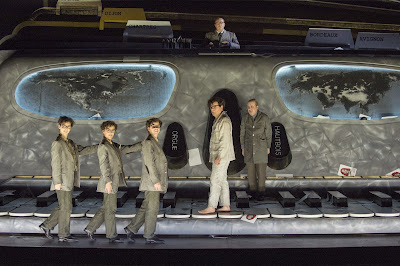 The giant accordion turns and moves, but within the orchestra Martinů writes fragments for solo instruments or small units like 3 oboes. The vast world theatre, and the tiny individual. This theme runs through the opera on several levels. Michel is alone in the busy village, and in the Central Office of Dreams he can't beat the bureaucratic machine.  In the last act, the Accorion turns over so it resembles a giant, hideous skull, its keys reesembling the keys of a piano, the working tool of most composers.

Apart from Michel himself, the characters appear in different forms, and the Three Gentlemen in Frock Coats (as described in the score) sing in unison.  Even Julietta (Julia Sporsén) is illusory, and needs to create an articial past through the postcards the Seller of Memories (Andrew Shore) peddles to the unwary.  Gradually Michel is drawn deeper into delusion. Who shoots Julietta? Did she, can she die? It doesn't matter. People in this cosmos have no attention span.  But as an audience, we do, which is why small details count, however elusive. 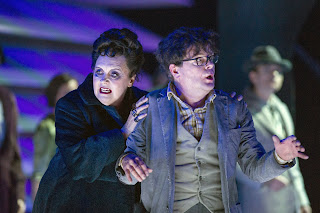 Anarchic as dreams are, performance should be rigorous. Martinů writes lusciously lyrical figures which seduce the ear, magically. But the Third Act tells us quite categorically that one cannot escape into the luxury of reverie. Beneath this lovely score lies a bedrock of anxiety. Is Michel all that different from the other inhabitants of this dream?  He sells books (fiction?) after all. The Convict and the Blind Beggar are fixated by the same dream that takes the form of a lovely, elusive woman.  Tension, anxiety and claustrophobia are fundamental to this music. Sharp staccatos, like the ticking of a clock, alarm bells. Yet at the ENO this sense of impending cataclysm was defused. Edward Gardner's Julietta is a pretty, light hearted reverie, not nightmare. The defining extremes in this core are smoothed over, so the firm structure of the opera becomes fragmented.

The singers, even the better ones like Hoare, Shore, Howell, Susan Bickley, Henry Waddington, Emilie Renard and Jeffrey Lloyd Roberts are solid rather than haunting. Martinů 's Julietta is not easy to stage but ironically the visuals (directed by Richard Jones, designed by Antony McDonald) were far more effective than the performance. We need to see this production because it's historic, and good. But anyone who wants to hear what the opera really should sound like should stick to the recordings. Krombholc (1964) is top recommendation, Mackerras conducts only fragments. When the complete new edition, recorded by Jiří Bělohlávek in 2009 is released, that will be the one to get. I've been listening to an aircheck of the broadcast. Even on an amateur quality tape, the true spirit of Martinů 's Julietta shines through, magical and manic in turns. There have been several stagings of Martinů's operas in recent years, and of course the full symphonic cycle, but Julietta is outstanding.  This ENO performance doesn't begin to reach those heights. I can't blame anyone thinking that  Martinů 's Julietta is mediocre if they haven't heard what it can sound like.