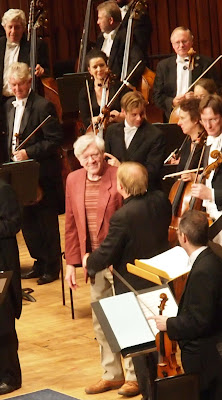 Colin Davis should have been conducting his 85th birthday concert with The London Symphony Orchestra at the Barbican, but he was taken ill . "I hope to be home soon", he said in a message read out to the audience. In the circumstances any disappointment must be moderated by good wishes for his recovery - and the health of Mitsuko Uchida, the scheduled soloist who also had to cancel. These things happen, and I wish them well.

The good news was that Martyn Brabbins stood in. Brabbins is a fixture on the British conductor circuit, extremely well respected.  His technical foundations are rock solid, yet he's adventurous and free spirited. Once I bumped into him when he was wearing ghoul makeup for David Sawers' Rumpelstiltskin (more here). Huge grin! Brabbins' range is eclectic, but he specializes in 20th century British music.  So it was good to hear him conduct Anthony Payne's elaboration of the materials which might have led to Elgar's Third Symphony.

Payne's Elgar isn't a "completion" but rather the result of Payne's engagement with Elgar and his mental processes. "I had to 'think Elgar'", he has said. There's a whole book on the experience Payne went through. The Elgar fragments are developed both as an extension of Elgar's ideas and as the response of a British composer writing with 70 years of further experience into the world Elgar left.  It's "not" Elgar, though there's enough to tantalise. The "summer" themes, for example, evoke many Elgarian ideas.  Payne stimulates us to think about Elgar in the light of our own responses to the composer. It's an extremely creative approach, which makes us reflect on how we respond to any music.

Brabbins' approach to Payne/Elgar is vivaciously energetic, which might not suit those who like their Elgar staid. But that in iteself is an insight. Brabbins negotiates the changes of perspective briskly, bringing out a very strong sense of dialogue, which, for me, is the secret of the piece: Payne's reflections on Elgar show how understanding is shaped by our own insights. With the LSO, Brabbins creates a vivid sense of Payne coming so close to Elgar's mind that he's doing a lot more than just dollying up bits of Elgar. This performance was much livelier than Brabbins'  account at the BBC Proms eight years ago. That shows how Brabbins himself keeps developing and hearing things afresh. Sakari Oramo's CBSO performance in 2007 was excellent,  but Brabbins' sense of Payne's personality gave this latest interpretation a distinct edge. Payne identified so closely with Elgar that he effaced himself, but Brabbins brings out the warmth and inventive spirit of Payne as well as of Elgar.

It was a greater tribute to Colin Davis to hear Brabbins, one of the leading exponents of Payne/Elgar, conduct because it was a reminder that, while we grow old, music lives on. The continuum doesn't break. Richard Strauss Vier letzte Lieder as Birthday Tribute was a much more questionable choice,  given that Strauss was contemplating death. Sally Matthews sang with obvious sincerity, but sacrificed articulation in the process. The pace dragged, self conscious and dirge-like. "Beim Schlafengehn" walked in its sleep. In the circumstances, Colin Davis might be more cheered by a more idiomatic  performance.

Gordan Nikolitch directed Mozart's Symphony no 35 D moll The "Haffner". This is a piece that depends on good ensemble and a good leader. Normally we wouldn't even notice there's no conductor. It's not a reflection on the LSO, who were fine, but this time the absence was poignant.