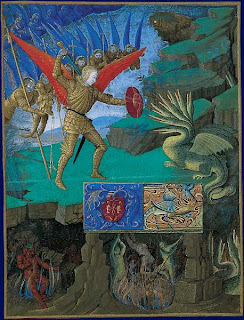 Superb Mahler Sixth Riccardo Chailly, Leipzig Gewandhaus Orchestra at the BBC Proms, Prom 69. Such a stunning performance that it would be wrong to do something superficial. Plenty of places to go if you want shallow, but it would pain me. After a year and a half of indifferent to horrible Mahler performances, at last something really worth listening to!  So please come back to this site tomorrow. UPDATE ! Chailly's Leipzig Mahler 6 HERE. In the meantime, I'll comment on Chailly and the Leipzig Gewandhaus Messiaen Et exspecto resurrectionem mortuorum.

This Prom (BBC Prom 69) was unusual because it wasn't loud. No strings attached in more ways than one! The Leipzig Gewandhaus Orchestra have one of the most gorgeous string sections in the world, Without string sections, orchestras are "dead". So Chailly and the Leipzigers understand what Et exspecto means. It was commissioned by the French Government to commemorate those who died in the 1939-45 war, who would never return.

Messiaen's Et exspecto resurrectionem mortuorum is a companion piece to The Quartet for the End of Time. (read more here).  The quartet was first performed in a prisoner of war camp on broken instruments in freezing conditions.  Hence the spartan economy with which Et exspecto is orchestrated. You don't hear the strings, but you listen "because" they are not there. Chailly and the Leipzigers also respect the long silences Messiaen specified between movements. At first, the Proms audience didn't know what to expect and coughed and fidgetted but then twigged Chailly had his head bowed for a reason. These silences were meant for contemplation. Messiaen, being devout, understood the Stations of the Cross in Catholic practice, each Station a kind of scena to be meditated on before going onto the next. Respecting this silence between movements is part of the progress of the work as a whole.

Contemplation in a work as shockingly dramatic as this? It's perfectly in order for any conductor to go for the overwhelming power of the piece, but the Leipzig Gewandhaus Orchestra isn't brassy and showy like some orchestras are. Volume isn't what they are about. Their Et exspecto was gentle, but from an orchestra like this, violence would not be sincere.  What's more, Et exspecto isn't really about Death but about resurrection. The earth is torn apart by cataclysm, but the end result is eternal life and union with God, or whatever higher force you might conceptualize. Et exspecto is extreme: hence the crashing cymbals and wailing brass. But gloomy it's not.

There is no such thing as "non-interpretation" in any form of music. You can't even look at a score without interpreting how the notes might sound in relation to each other. Chailly's Et exspecto resurrectionem mortuorum may be different, but he's arrived at it by interpreting why it might be the way it's written. "Music is not in the notes" said Mahler. It's why the notes are put together.
------------------------------- 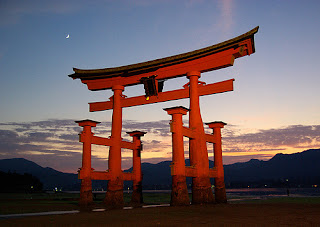 Because Olivier Messiaen's Et exspecto resurrection mortuorum is about the End of the World, it's scary to listen to at this time (Japanese Tsunami). But maybe this is, after all, the time to listen to what it really means. There is a deliberate Japanese connection, since Messiaen visited and loved Japan.  He is emphasizing universal spiritual values which apply to all, Christian or not.

Note the orchestration. No strings! The Quartet for the End of Time can be heard as a prototype. Twenty years later, and after nuclear war became a reality, Messiaen goes for maximium power. Massed percussion forms the bedrock of Et exspecto, for it represents the earth itself, ripped asunder by the Apocalypse. Specifically Messiaen uses six giant Asian gongs, more powerful than tam tams. Gongs call the faithful to order. Ritual progression is very much part of this music's structure, so gongs mark stages in its raga-like plateaux. Metallic percussion, too, rather than timpani, for dissonance. Pitched cowbells, and a gigantic set of tubular bells which ring out like an organ, the composer's personal instrument. Against the percussion,woodwinds create birdsong or the sound of wings in flight. Brasses range from small D trumpet to Wagnerian tuba. What would the Final Judgement be without trumpets?  Messiaen wants strident, not resonant.This work is, after all, about waking the dead.

The ritual character of Et exspecto is underlined by quotations from different parts of the Bible. It's a Via Crucis which unfolds in stages. First: "From the deepest abyss I cry, Lord hear me!", which is what Jesus is supposed to have called out in his time of agony. Massive dark chords like tectonic plates, shifting inexorably. The brass like the rumbling of some deep fissure, which explodes into wild, screaming chords and ends in a single, piercing shriek. Hearing this after Sendai is painful. Then silence, extremely important as it marks an invisible, inaudible transit.

In the second section, a moment of calm reassurance, for Christ has risen from the dead. Diaphanous textures, which grow into quirky, jerky angles. The movement of birds, intuitively darting in crazy angles so they can't be caught. As Messiaen the ornithologist would have understood. Birds are fragile, but they evolved from dinosaurs, and survived. Even greater stillness marks the beginning of the third section, but now the tubular bells toll, calling like the bells in a church. The woodwinds describe an even more powerful bird theme - a bird from the Amazon jungle, apparently, which has existed outside civilization. Messiaen is referring to creation itself, connecting the Beginning and End of Time. In Christian belief, an Angel blows a trumpet and graves open. Hence the darkening "earthquake fissure" theme.

Wild,  jerky figures associated with the "birds" start the fourth section, which soon  the percussion explodes. When these gongs crash,  it feels like blinding light, a shocking, flashing thunderbolt in sound. At this moment, I can't help but think of the cataclysmic light of a nuclear explosion. Ironically, it's the Resurrection, start of a new era.

The final movement almost defies description. Powerful ostinato, gongs and blocked percussion, repeated over and over, driving the point in so there's no mistaking its force. Gradually the music turns, like a juggernaut. The image of an eternal wheel, perhaps propelling the music ever forward. Messiaen uses the quotation "And I heard the voice of an immense crowd". It's an immense crowd becauase all who have died in the past have been raised from death and suffering. (That's assuming God doesn't discriminate between faiths). That's why the whole orchestra marches forth in unison. Gradually the pace builds up to an overwhelming climax. It's not a march in conventional symphonic terms but owes its structure, perhaps, to Japanese gagaku, which inspired Messiaen's ground-breaking Sept Haïkaï, written in 1962, soon after Messiaen returned from Japan, and two years before Et exspecto resurrectionem mortuorum.

In Sept Haïkaï,  the image is a “floating gate”, the torii at the Miyajima shrine in Japan. The red arches stand alone in the sea, as if suspended between earth and sky. It is a gate, but to what? The arches stand amid a panoramic open  landscape. As the weather changes, as time changes, the surroundings change dramatically. Photo by H Orihashi. Read more about Sept Haïkaï HERE.


For Et exspecto resurrectionem mortuorum means "In expectation of the resurrection of the dead". It's not meant to be oppressive or gloomy. It was commissioned as a memorial to the French war dead, but Messiaen was  having no truck with militarism or even national glory. Instead he comes up with something so unique and so universal he wanted it performed in the Alps. So if the Christian form of this piece bothers you, remember that for Messiaen, God resided in Nature, and mountains were Nature's cathedrals.
at September 03, 2012

Hi there, lovely detailed post! I hope you don't mind if I link you? I've written briefly about Prom 69 and just want to give the option for others to read more in-depth about this piece.