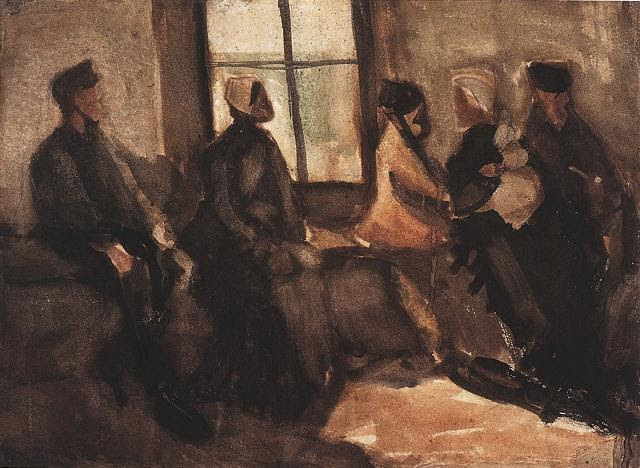 Who is dreaming of whom? Martinů's opera Julietta at the ENO from Monday 17th.   For my review, please see HERE. A man arrives in a strange village where nothing seems quite right. The villagers have no memories to bind them to reality, so things unfold without sense or connection. But what is reality? The opera’s subtitle is “The Key to Dreams”, which implies a search for meaning, whether or not it can be unlocked. From the orchestra emerges a lovely, haunting melody. The man thinks he’s heard it before, connected to a vague memory - a beautiful woman ? He’s determined to pursue the dream which seems to fade as fast as it unfolds. The woman is Juliette, shining bright and golden, “like a star in the firmament”.

Deeper the man goes, into a dark forest, where he meets a Seller of Memories, who sells photographs of exotic places. The man buys into the images, convinced that they show his past with the woman he’s searching for. Eventually the man finds himself in The Central Office of Dreams which people enter and leave when they sleep. Closing time! warns the nightwatchman (who was also the Seller of Memories). Wake or you’re forever trapped! But Juliette is such a powerful, seductive dream that the man would rather remain in eternal limbo than lose her.

Julietta is marvellously conceptual. Strange figures appear as they do in dreams. They feel full of portent, but what do they really signify? Are they signposts or red herrings?  What is the nature of memory? Is memory truth, or an assemblage of images which we've rearranged ourselves?  And why do we need dreams (and memories) at all?  Martinů said that Julietta was the only one of his works that he would like to hear again.  Hence, perhaps, he returned to it and revised in as he lay dying in 1959. More "memories" and "dreams".

The ENO production is directed by Richard Jones, so expect modernist. See production images HERE. Obviously we can't tell by photos but this looks like he and his designer Antony McDonald are picking up on an important theme that runs through the opera. Listen to the opera yourself and hear if you can pick up on this.  The benchmark recording was made in Prague in 1964, only five years after the composer's death. Jaroslav Krombholc conducts singers prominent in Pragiue Opera at the time - Maria Tauberova, Ivo Zidek, and Véra Soukupová.

Martinů's Julietta received a major full performance in 2009, conducted by Jiří Bělohlávek with Roderick Williams in multiparts, William Burden and a gorgeous Magdalena Kožená. (read my review here). That's not available on CD though airchecks from the broadcast exist. It's superb and quite magical. It really ought to be released, as it was the first complete version, based on a new edition including passages not available in 1964.

Above all, listen. Julietta is sung by Julia Sporsén in one of the biggest roles in her career, and the rest of the cast are ENO regulars. Susan Bickley sings the Fortune Teller which Soukupová sang for Krombholc.  Lots more on Martinů on this site, please explore.
at September 13, 2012