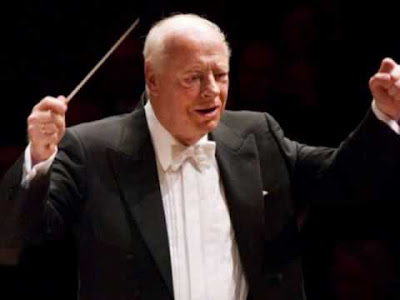 They left the best for last at this year's BBC Proms. Bernard Haitink conducted the Vienna Philharmonic Orchestra in Prom 75, Haydn Symphony no 104 (London) and Richard Strauss Ein Alpensinfonie. The previous evening, they'd played Bruckner Symphony no 9 so wonderfully that I was transfixed. And I don't normally get Bruckner.  With Strauss and Haydn, Haitink and the Viennese ended the 2012 Proms season in a kind of apotheosis.

Haitink as conductor is philosophical, sometimes to the extent that you can't follow where he's goiing. For Haydn, he needed only a small ensemble, but from these he brought forth great richness and warmth. Benevolence, even, if such things can be expressed in music. Haydn was one of the last composers to endure servitude status, yet his Symphony no 104 exudes equanimity. To the Vienna Philharmonic elegance is second nature.  Their Andante moved with grave dignity, a reminder that the state of grace of grace to come in the final movement was built on firm foundations. The melodic themes sounded truly "spiritoso", dancing with energy. Yet in the quieter passages,a  moment of clean, pure joy. Someone once raged that  Mahler never had a light-hearted moment in his life, which is nonsense. No normal, sane human being is an automaton. Haitink and the Viennese proved that happiness is a perfectly valid, even essential state of the soul. I heard echoes of The Messiah, and its exuberant, positive  faith.

Richard Strauss's Eine Alpensinfonie op 64 was written in 1915 when Germany and Austria were at war. Yet it's no escapist fantasie. Anyone who knows mountains knows that they can be dangerous, and that nature doesn't smile on mortals. It is fashionable these days to knock programmatic music, but only a fool would be trapped by literal readings of abstract sound. Eine Alpensinfonie operates on a metaphysical level. The Wanderer of the Romantic ideal is recreated in 20th century terms. The 22 "scenes" in this tone poem could represent a Hero's journey, as might the scenes in an opera. Yet the protagonist here isn't the literal embodiment of a personality but a much more sophisticated way of expressing theorteical concepts through music.

In the "Meadows" sequence, we hear quiet, metallic cowbells, but they aren't merely decorative. In harsh alpine conditions, communities depend on cows, not farmland, Strauss writes long, flowing lines that suggest calm timelessness. But don't be lulled by the flute and horn melodies. Summer in alpine pastures is short. Significantly Strauss follows the "Meadows" with "Thickets". Darker, tenser sounds, suggesting anxiety. Fall from defined paths and you could be lost forever, down a ravine.

The Glacier looms up. Low rumbling brass suggest something impenetrable; staccato, sibilant strings suggest tumbling, sliding surfaces. The section rises to an imposing crescendo. We are Auf dem Gipfel, on the peak, with nothing above but infinite sky.  A glorious panorama in sound that suggest infinite possibilities. Then Strauss pulls a quiet oboe solo that emerges playing a poignant melody, a counterpoint to the massive walls of sound that came before. Expansive, majestic harmonies seem to reach into infinity. I thought of a time I stood surrounded by the great circle of peaks in the Hoher Dachstein. (photo shows the Hallstättergletscher, surrounded by the peaks of the Dachstein). Haitink and the Vienna Philharmonic give these magnificent moments a hymn-like quality, emphasized by sonorous organ, Trumpet and trombone figures like celestial fanfare, reminding us that we are mortal. Is this the "Vision" Strauss is referring to? Not in a literal sense, but a moment in which we comprehend our place in nature and the scheme of whoever created it.

Glorious "peaks" in the music, then a sudden cutting off, which Haitink emphaises with great dramatic effect, for it is part of the meaning. We are plunged back into uncertainity. "Mist" rises from the deep valleys. In the eastern Alps the weather is treacherous, being caught on the slopes in a thuderstorm can kill. A brief moment of unnatural calm. In this wonderful playing, I could almost visualize the strange colour of light that precedes a storm. Electrifying rashes, hurrying passages. the huge Royal Albert Hall organ blasts menace. A percussionist winds the Wind Machine, other beat metal plates to suggest thunder and driving rain. Absolutely atmospheric.

Yet there's more to this than weather. In the rapid descent from the peak, we hear te music of the "waterfall", driving, fast-paced figures (xylophone, harps, strings) sparkle, Beautiful, yet sinister. Haitink and his orchestra conjure up a kind of psychic madness in these scurrying decelerandos, whipped by the organ and metallic non-wind "wind" instruments.  Then "rays", shafts of warm, glowing sound, evoking something gentler. The plucking of harps, delicious string textures. Led by the organ, another hymn-like theme arises, and the horns play a kind of counter reveille. Woodwind melodies remind us of the serene Alpine pastures of noon. Haitink makes the nocturnal mood sound just as serene, for Night is as important as Day in the life of the mountains.

Incredibly beautiful playing, yet with emotional depth and humanity. The encore was a Johann Strauss II Waltz, designed to please the public for whom Vienna is a symbol of sugar-coated frivolity. After that amazing Richard Strauss's Eine Alpensinfonie, it sounded pretty but trite. I wanted to stay forever with Haitink and the orchestra in the Alps.
at September 08, 2012