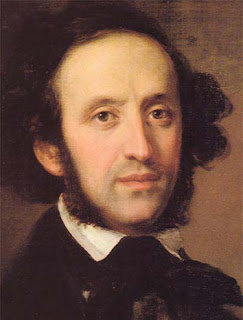 Mendelssohn loved the Leipzig Gewandhaus Orchestra, and they revere him in return. Impossible then to miss the Leipzigers all-Mendelssohn Prom 67 at the Royal Albert Hall. When Riccardo Chailly opened their new season in 2005 as Director, they programmed Mendelssohn over and over. It was a statement of intent. Since then the orchestra has surpassed itself,  the legendary "golden"sound regenerated anew. Chailly and the Leipzig Gewanndhaus Orchestra are a match made in heaven, from which Mendelssohn is smiling down.

Starting the Prom with the Overture from Ruy Blas (op 95, 1839) overturns stereotypes of Mendelssohn as "effete".  The Overture was written for a brand new play by Victor Hugo, which Mendelssohn hated. So Mendelssohn writes an overture so punchy it's even more dramatic than the play itself!  Those sharp "footsteps" in the strings, sometimes mimicking guitars, the wild  turbulent longer lines, the extreme fanfares. Mendelssohn creating savage satire, mocking vulgar taste and excess. Chailly and the Leipzigers play with fire and finesse.  This stylish elegance is significant, because the Overture to Ruy Blas can be read as a riposte to Berlioz, to popular fashion, and indeed, to Wagner and Liszt, had he known how they would maul him after his death for reasons of their own.

Having blown away the cobwebs, Mendelssohn's Violin Concerto in E minor emerged with even greater purity. Although the piece is so famous, Nicolaj Znaider, Chailly and the Leipzigers made it feel fresh. Exquisite, the distillation of everything beautiful and poignant. When I die, I want the last sounds I hear to be that elusive melody.... so sad and yet so life affirming.  Each time the theme returns, Znaider enriches it, haloed by sensitive woodwinds.  On the BBC broadcast, you can hear Znaider taking breaths, which weren't audible live. This music is sublime, but Znaider's extra personal touch reminds us that Mendelssohn wrote for human beings. This was s a breathtaking performance, truly committed and beautifully judged. An experience never to be forgotten. It was a privilege to be there.

There's more to music drama than Wagner: had Mendelssohn lived, would we be thinking of opera in a different way? Mendelssohn's Overture to The Fair Melusine (op 32. 1833) expresse big ideas, but without words. We don't need to be told, we respond intuitively to the surging climaxes and delicate "water" imagery even if we don't know who Melusine was.   Chailly and the Leipzigers bring out the inherent drama in the piece yet never sacrifice poise to flash. This is drama for refined minds, thinking in abstract terms, yet it's so emotionally potent. The "crashing waves" give way to a single clarinet, which is then supported by winds. The music ends, but our imaginations continue to react.

Mendelssohn's Symphony no 5 "The Reformation", was last heard at the Proms in 2009 (Yannick Nézet-Séguin and the Scottish Chamber Orchestra) but Chailly and the Leipzigers are in an altogether more exalted league. No comparison. The Leipzig Mendelssohn tradition is unique. Players may change, but know what Mendelssohn meant to Leipzig, and to the huuman spirit. It is no coincidence that the orchestra was involved right at the start oif the protests which would lead to the collapse of the GDR, and thus to dismemberment of the whole Soviet bloc. The Nazis could smash the statue of Mendelssohn outside the Gewandhaus, but they could not destroy what Mendelssohn symbolizes. 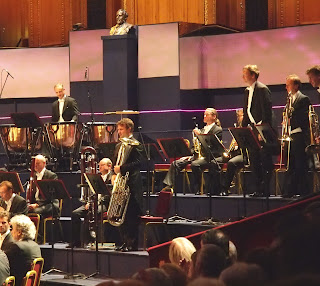 Mendelssohn's Fifth Symphony "The Reformation"  is more uncompromising than the glorious Lobgesang (Symphony no 2) or the delicious Italian (Symphony no 4) but it's spartan for very profound reasons. It was written to commemorate the Augsburg Confession of 1530, where the Holy Roman Emporer recognized that Protestants and Catholics could coexist.  This was a critcial moment in German history, from which in many ways the Protestant German identity arose. Without Augsburg, no J S Bach, or even Meistersinger, for that matter.  Mendelssohn revered Bach at a time when the earlier composer was almost forgotten, so this symphony is Mendelssohn's musical statement of faith. Chailly and the Leipzigers firmly carve out the quotations from  Ein' feste Burg is unser Gott, for this is the foundation stone of the symphony (and indeed of the German musical tradition).  Absolutely rock solid, so the counterpoint  melody seems even freer and more joyous. Note that "dancing" march, another reminder that Wagner owed much to Mendelsohn.

This performance had undfamilair bits because the edition used was an early version, not heard before in this country. Yet Chailly and the Leipzigers performed it with such committment that the characteristic warmth of their style won over. Beautiful brass - listen for the trombones, trumpets and the contrabass ophicleide pictured above, (not as strident as a tuba). Magnificent flute! With Mendelssohn, always the importance of individual voice, and here this voice was intensely assertive, though graceful.

Alas, some in the audience saw fit to impose their voices over the music. It's unfair on everyone else. When the idiot shouted Bravo! between movements, it  broke the mood. Chailly took a while to readjust, visibly annoyed. This kind of interruption is barbaric. No one needs to be told that Mendelssohn and these performers are good. All it shows is that the shouter is not really listening, but trying to dominate. Save that for Brown Shirt rallies, please let the rest of us listen to the music.

Please someone at the BBC tell the presenter not to praise this sort of vulgarity (and the silly flag waving hands) because it only encourages buffoons who think they are more important than the music or anyone else.

Mendelssohn's Wedding March for an encore - only two extra instruments needed, and extra horn and cymbals. Although it's wedding music, it's not easy to march down the aisle because the rhythms aren't regular enough. The piece comes from A Midsummers Night's Dream. Fairies and Grecian nobles don't stomp.  Wagner's Wedding music from Lohengrin works better because it gives better cues for bride and groom to troop in procession. Which rather summarizes a few more differences  between Mendelssohn and Wagner.