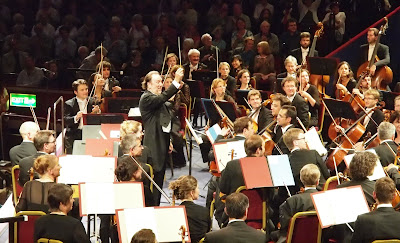 Have Riccardo Chailly and the Leipzig Gewandhaus Orchestra become one of those legendary pairings, like Furtwängler and the Berlin Philharmonic? Certainly in their Mendelssohn (read more here)  but Chailly's account of Mahler's Symphony no 6 in A minor at BBC Prom 69 gave much to consider. After two years of indifferent and often downright disgraceful Mahler performances, at last Chailly and the Leipzigers give us one that sets us thinking.  So much so that I haven't been able to sleep all night, (too much coffee) and am feeling shattered. So this review won't do them justice!

When Chailly conducted Mahler in Amsterdam, it wasn't the easiest fit, since the Concertgebouw Orchestra has such a formidable Mahler tradition, and some of the players needed time to adjust. There are some fine recordings from that period (an exceptional Des Knaben Wunderhorn) but when Chailly moved to Leipzig, something special happened.  Chailly's Mahler is different, so devotees of the Bernstein style for example will be aghast. But so what? Mahler is such a great composer that there's always room for thoughtful interpretation, and thoughtful listening for that matter. No less an authority than Donald Mitchell has such a high regard for Chailly that there's a big section on Chailly in his Discovering Mahler (2007)

Chailly works with the strengths of the Leipzig Gewandhaus Orchestra, not against it. The ostinato march that runs throughout the symphony enters unobtrusively. No stomping, but a fleet-footed sense of forward movement true to the "energico" marking. Mahler 6 connects to Mahler 3. In both, the suggestion of peaks and open vistas, "mountains" as metaphysical metaphor. (read more here).  The cowbells are somtimes interpreted as souvenirs of Alpine meadows, but Mahler preferred that they be heard as sounds heard from a distance (which alpine cowbells are). Chailly keeps them so muted they are only just audible, creating spatial depth.

The Leipziger's characteristic grace makes the cursive figures particularly seductive. You might hear them as Ruckblick (backward glances), but Chailly makes me think of round shapes as oppsed to angular, feminine ideas as opposed to masculine. Through so much of Mahler we can find this dichotomy. Interpret them as you will. Is Mahler referiing to his muse Alma, or to the "Eternal Feminine", to creative empathy as opposed to negative regression? Warmth comes naturally to this orchestra, offering opportunities to explore this side of Mahler's music more prosaic readings can miss.

In this performance I was struck by the prominence Mahler gives to the harps. They feature before the solo violin passage in the Allegro. Listen to the broadcast on BBC Radio 3 and follow how the harp passages are sharply defined and continue to resurface throughout. The flute solo in the Andante was exquisite, also garlanded by harps. Usually, everyone's listening for the hammer blows and crashing cymbals, but Mahler is making a much more subtle point, and the Leipzigers bring it out more clearly than usual.

Chailly chose Andante-Scherzo. He gives weight to the strings in the Andante, using the "golden" Leipzig glow so the movement feels like a languorous looking back, the repeating patterns nicely burnished. It also gives balance to the symphony, where dichotomy is of the essence. And balance is in the DNA of a Mendelssohn orchestra. Much has been written about the Andante-Scherzo, Scherzo-Andante war, but dogmatism is the enemy of art.  Much moree interesting is why a conductor makes his choices, not what the choice may be. Whatever we might personally think is irrelevant: it's the conductor's decision as artist.

Chailly's Scherzo begins optimistically, but staccato figures return, and the circular figures develop  bizarre turbulence, which then gives way to stillness, so you hear the staccato up close, precisely defined. This performance wasn't particularly demonic, but the irregular rhythmic shifts suggest dangerous imbalance, If the quietness evokes a heartbeat, do these patterns suggest arrthymia?  That may not have been in Mahler's mind but this symphony comes from the same time period when He wrote Um Mitternacht, which refers to a man listening to the beat of his heart in the stillness of the night. "Ein einz'ger Puls war angefacht um Mitternacht". All that separates us from life or death is a single, fragile pulse. Try this one yourself at midnight. It's scary.

Volume increases but the brass are mute. Xylophone, glockenspeil, tam-tam and of course the harps. Chailly makes the orchestra sound like an array of ticking mechanisms. Do these ostinato patterns mark the passage of time? For the symphony draws to its inevitable close. Mahler specifies that the hammer blows should sound hollow, not bright and brassy. No-one has figured the perfect hammerblow but the Leipzig Gewandhaus Orchestra uses a large wooden box and a massive wooden hammer (see photo). Mahler's hero isn't blown away by theatrical furies, but felled by dull thuds. After the first hammerblow, we hear those harps again, plucking that fine, clear melody that suggests open vistas or memory or whatever. The solo violin makes one last entry and suddenly tempi whizz past,  and the opening march returns in tiny rustling fragments, hurtling forward, decelerating.. Then the final hammerblow and the strings play a high, sustained chord. The hero has flatlined, can't be  resuscitated. Or find redemption. That's why Mahler 6 is really "tragic" because unique among Mahler's symphonies, there's no transcendence.