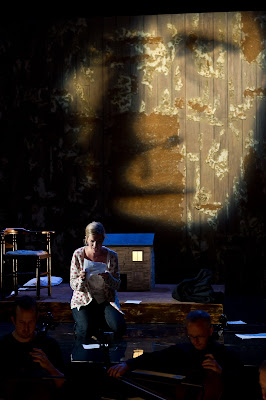 "Oner Night, two Operas", as Music Theatre Wales describes its current double bill, Huw Watkins In the Locked Room and Stuart MacRae's Ghost Patrol. This week at the Linbury, ROH2. Next : Cambridge, Basingstoke, Manchester, Cardiff and other places in Wales. The production premiered at the Edinburgh Festival (reviewed by Juliet Williams  here), so I was delighted to get a chance to hear it too.

The operas are new works jointly commissioned by Music Theatre Wales and Scottish Opera, giving two bright young composers an opportunity to write for the stage. Writing for theatre is different to writing vocal music, so it helps composers develop. We all benefit.

Huw Watkins is well known as a pianist and was picked by Thomas Adès who got him a composing commission in 1998. NMC has just issued a Huw Watkins Debut Disc (review here). Although it's hard to label any composee with style while he's in his mid-thirties, Watkins' music is accessible and open, potentially well suited to opera. In  the Locked Rooom is based on a story by Thomas Hardy. A couple arrive at lodgings where one room is permanently left locked, for the exclusive, unpredictable use of a poet, Pascoe (Håkan Vramsmo). The woman, Susan (Louise Winter) adores poetry and is unsatisfied by her venal materialist partner Stephen (Paul Curievici). As a metaphor, the "locked room" is obvious. What's less obvious is why drop-dead gorgeous Vramsmo, who sings with as much character as he looks, is having an on-off affair with the mature landlady Ella (Ruby Hughes), but this is fundamental to the outcome. .

The libretto is by David Harsent, whose work with Harrison Birtwistle (The Woman and the Hare, The Minotaur) is exquisite. Harsent's poetry is so subtle that its simplicity is deceptive. It's close to conversation, where meaning is expressed by more than words. Thus the composere has to find a way of filling in meaning around text. Perhaps Watkins is so in awe of Harsent that he doesn't dare, yet, hold his own against him. A plot like this doesn't need illustrating so much as being undermined, creating deeper levels of tension. There are good set piece moments (particularly for Susan) which let the singers shine. All sing well, but Vramsmo and Curievici steal the show because they're both natural actors, and can expand their roles beyond singing. They are directed by Michael McCarthy. Wonderful set, designed by Samal Blak which tells the story remarkably well. When Music Theatre Wales does things, it does them with style. 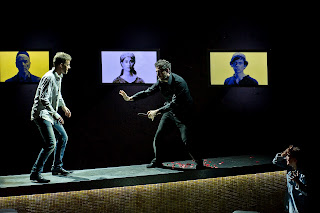 Stuart MacRae's Ghost Patrol is far more demanding as music, and as such much more satisfying. The text (Louise Welsh)  is clunky and the ideas fairly incoherent, but MacRae writes with the flair of a born dramatist. A drifter Sam (Nicholas Sharratt) breaks into a bar whose owner Alasdair (James McOran-Campbell) recognizes him as a former comrade in the Army and hires him. MacRae uses the tensions to develop a psychologically adept portrayal of posttraumatic stress syndrome. The two ex-soldiers are deeply conflicted,  and their suppressed memories boil to the surface. We can hear the guilt and violence in MacRae's music, crackling with menace and fear. The orchestra springs into vivid action,  so even the rough edges feel right for the subject. Pre-recorded voices and film footage show the civilans the soldiers killed. They haunt Sam and Alasdair, who gradually fall apart emotionally. Perhaps they are even aspects of one another? That shows how perceptive MacRae's music is, for it suggest so much beyond the plot. Alasdair's girlfriend Vicki (Jane Harrington) has lovely music written for her but the part isn't all that integral to the narrative . Harrington just gves it weight by her performance.

Although also in his mid thirties, MacRae is extremely experienced, with several Proms behind him. His Violin Concerto has been recorded by Christian Tetzlaff, no less, and NMC has a CD of MacRae's music. Ilan Volkov conducts the BBC Scottish Symphony Orchestra, where MacRae was resident. If Ghost Patrol is anything to go by, MacRae has great potential.  The joy of Music Theatre Wales productions is that they allow composers to learn their trade as opera writers through practical experience.  Excellent performances, lucid stagings. For more information on upcoming performances, touring to 11th November, please see here.
photos courtesy Music Theatre Wales
at October 01, 2012