Romance of the West Chamber 1927 - analysis 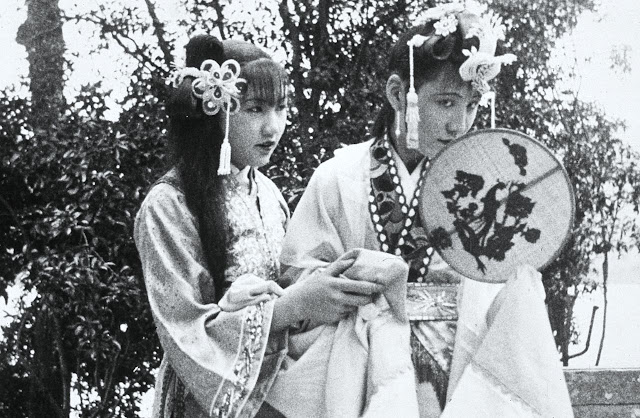 The Romance of the West Chamber (1927) (西厢记) was made barely two years after Eisenstein's Battleship Potemkin, and was almost exactly contemporary with Abel Gance's Napoléon, both of them landmarks in western cinema. The Romance of the West Chamber is almost up there with them, for it was the first grand-scale historical saga made in China. The subject itself was ambitious, because it's one of the great classics of Chinese literature. Adapting it for film was an entirely new concept, and the film makers knew how much they had to live up to. The movie was concieved on a grand scale, shot on location in the vicinity of the 1,000 year old Liuhe pagoda (六和塔) near Hangzhou. Some of the scenes are clearly shot on location in an ancient monastery because they feature elaborately carved gates and architectural features which no studio mock-up could hope to emulate. The film used the most advanced film techniques available at the time, so the narrative blends realism with fantasy. 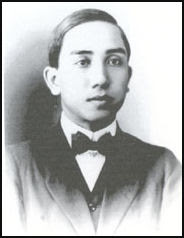 Hong Kong was right in the vanguard of Chinese film. Lai Man Wai (黎民偉, Li Min-wei, 1893–1953), made the first Chinese feature film in Hong Kong in 1913 and founded Minxin Film Company, which later moved to boom-town Shanghai.. Lai was a visionary, who had supported Sun Yat Sen during the 1911 Revolution, and who understood the potential film could contribute to the modernization of China. Earlier Minxin movies were relatively low budget but Lai put so much in the Romance that his company didn't reecover financially. Indeed the whole of Lai's life can be seen as a struggle to create art despite adverse situations. Choi Kai Kwong's 2001 documentary Lai Man Wai, Father of Hong Kong Cinema is absolutely essential, for Cantonese film makers, actors and technicians were fundamental to the development of film in China. Get the DVD  here.

The Romance of the Western Chamber is available on DVD and through other sources, but it's only half of what the original must have been like. Of the 10 original reels, only 5 remain, so it helps to know the basic story, rather than judge the film in ordinary movie terms, because there are so many missing parts.  Luxuriate in the scenery and the attention to detail. Look out for the bamboo filigree in the ornamental garden, the carvings in the temple, the costumes and the antiques. Watch the soldiers running up hills, with the Liuhe pagoda in the background. The real pagoda in which the original story was set is hundreds of miles away in Shanxi province. Liuhe is closer to Shanghai, and more convenient for the film studio. It's also quite a sight.

Tsui Yingying is a maiden who is staying in a monastery with her mother, younger brother and maid. The actress is Lim Chocho, a big star at the time, very charming. She was a Cantonese too, though born in Vancouver. She married Lai Man Wai in 1920 and made many movies together. Read more about her here. The hero Chang Kung (T K Kar) is a scholar travelling to Beijing for the Imperial exams, who stops at the monastery because it's a quiet place to study. Their eyes meet, they fall in love. However, the countryside is overrun by bandits and the bandit king wants to abduct Miss Tsui, so he attacks the temple. Wonderful battle scenes, soldiers running along up steep slopes and a fight between the bandit and the White Horse General who happens to be a friend of the scholar. Here is where you wonder what the missing reels might have shown - the earliest swordplay choreography in Chinese film? 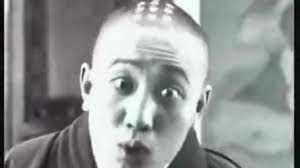 Wonderful vignettes, such as the  Stupid Monk (pictured left), the old abbot, the maid and Miss Tsui's maid Hung Niang.  Great acting, and wry humour.  The bandit, Tiger Sun, is more stylized, as if he's a direct descendant of a character in traditional Chinese opera. He doesn't have to emote because he doesn't have to think. He's a warrior. It's interesting to see how this film mixes "modern"  acting with traditional dramatic practice. The director was Hau Yiu, (1903-42), also a Cantonese. Read more about him here. What a tragic life, but so typical of that period. 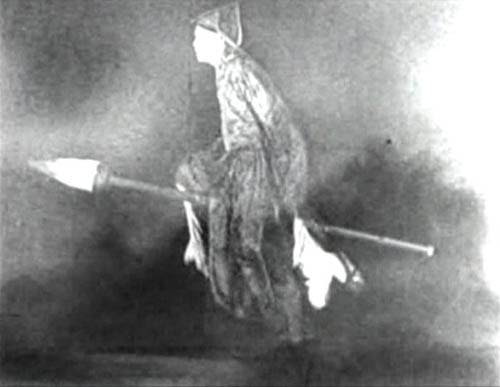 Some of the frames are so well lit and focussed that you realize just how well made the original movie must have been. Chang Kung the scholar falls asleep at his desk and dreams that he's with  Miss Tsui, and the bandit king comes in and drags her away on his horse. What's a scholar to do? He looks at his ink brush and suddenly it grows so big that he can ride on it . He whips it as if it were a horse, and rides through the skies in pursuit. Nice use of superimposed images, a device that features in later Hong Kong movies, though less so in the realism of left wing mainland film. The image of the scholar riding his brush to defeat the bad guy illustrates the precept "The pen is mightier than the sword".  When he wakes, he realizes that he's been cuddling his servant boy, whose face is now smeared with the ink from the brush.

It's tantalizing to watch the 45 minutes remaining of the Romance of the West Chamber because so much of it seems to foreshadow later Chinese film. Perhaps it was more influential than we realize, even if it didn't make a lot of money. Because the world is west-centric, the creativity of non-western cinema isn't appreciated enough. All the more reason for watching the Dream of the West Chamber and other Chinese movies. They are an insight into how other cultures adapted the new medium for their market.  You might also like to read about Prem Sanyas, "The Light of Asia" the 1925 Indian movie about Gautama Lord Buddha in his youth. That was also filmed on location and in the private palaces of the Maharajah of Jaipur. Both the Romance of the West Chamber and Prem Sanyas are important because they counteract colonial stereotypes. Asian film makers were every bit as adept as their western contemporaries.