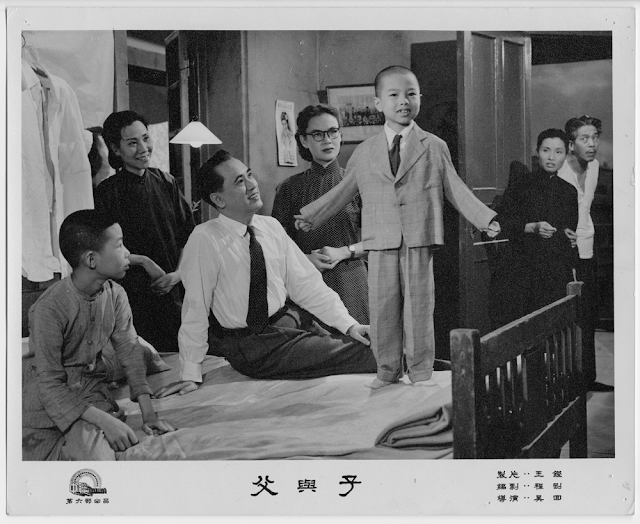 Movies as cultural history : 父與子"Father and Son" says so much about Chinese values that it's a film that should be studied by anyone with any interest in these.  A small boy, Ha Tsai "Shrimpy" lives in a very traditional village. He's even got an old-fashioned haircut, bald at the back, round in the front. He's playing with the other village kids. (The actor was 9 year old Yuen Siu Fai 阮兆輝)

A stranger in a western suit arrives. It's Ha Tsai's Dad (Cheung Wood Yau 張活游) who went to Hong Kong when the kid was a baby and is now taking him to the big city. Father is good at his work and has just been promoted: a model success story. So he buys his son a western suit and takes him to the funfair. "Do you love me?" asks Dad. "I love you so much that I want to tend fields and grow lots of rice for you to eat!" says the kid. Dad gulps. That's not what aspirational fathers want.

But the boss's son's posh schoolmate needs a job and Dad is demoted - no employment laws then. "Connections", a colleague consoles him, "that's what gets you ahead, not merit" . So Dad is determined to give his son the best possible start in life,. In Hong Kong in those days there was no public education, instead all kinds of small schools, some even on rooftops, parents sacrificng themselves so their children might have a better life. Although Father is slightly better off than his poverty-stricken flat mates, he's quite poor. But he enrols the boy in a posh school and gives him a new fancy name, Ng Kwei Sang, which symbolizes his new prospects. But when the teacher calls out the new name, he can't remember it. "I forgot" said the kid, "I'm Shrimpy" The other kids laugh because it's a country bumpkin name.

Father has to borrow money to get the kid a uniform or he can't go on school outings. Interesting the uniform is decidedly bizarre with stripey cap, very un-Chinese. The kids conform and march to a whistle. Kid gets the uniform in a mess and father smacks him. Their flatmate stops the beating "Education is not uniforms!" he cries. It's poignant, because the neighbour is a labourer, probably illiterate, so poor that his son can't go to school at all.  Ah Keung, the neighbour's son, sneaks out in the rain to work as a shoe-shine boy to help his parents. Kids were like that in those days, the whole parent-child relationship based on mutual support.

Ha Tsai  skips school. Father goes berserk. "I pawned things, I borrowed money I don't have, I've even given up meals so you can go to school. How can you destroy my hopes". It's heartbreaking how he's projecting his anxieties onto the boy.

One of Ha Tsai's rich classmates (son of father's boss) throws a birthday party.  Father and son walk all the way up the Peak because they can't afford transport. "Where's your maid? " asks the doorman. Watching the kids play, Dad beams with pride. He doesn't hear what the nasty rich kid says about his son.

One day the posh school gets the kids to sell flowers to raise money for kids who can't afford education. Enterprising Ha Tsai finds his way into a movie studio where mega stars are playing themselves as actors - brilliant!  "Here's a fiver" says Ng Chor fan, which was a whole month's school fees in those days. Ha Tsai's teacher arrives at Ha Tsai's home, "This is your house?" she says. Ha Tsai sold all his flowers but brought no money back.  She thinks he's stolen the money. It turns out that the kid gave it direct to Ah Keung the shoeshine boy, who couldn't afford school. He was right in intention, but he didn't understand the system.

Father is pressured into throwing a birthday party for Ha Tsai, even though he can't possibly afford it.  They don't even have the space, and have to move their furniture out.  But it's the biggest treat Ha Tsai ever had - western soft drinks instead of tea, western cakes, and a cowboy suit. It's an investment in impressing the rich and making the kind of fancy connections that count in getting ahead in the world. When Rich Kid arrives, he's appalled. He's never seen a tenement before, he can't believe people live like that. "Flies!" he screams, "Mummy says flies cause disease". So the rich schoolkids all go away. "Why let all this food go to waste"? says the neighbour,. So the tenement families tuck in and Ha Tsai gets the best party of all.  Next we see Father taking son back to a humble community school where the kids grow their own vegetables and get their clothes dirty.

This film is a cultural document of Chinese values.  Watch it HERE (no English). Parents sacrifice everything that their children might have a better life for themselves. That was why Hong Kong people worked so hard. Hong Kong was prosperous because Hong Kong people made it so. Chinese parents saw education as the key. In this film, we see affluent kids who have no idea how other people struggle and quite possibly grow up to fritter away their expensive educations.

A healthy society grows when people have social conscience. I went to a school where entry was based on merit, so there were extremes of wealth and poverty. One kid told her father that her best friend was struggling. Very discreetly, that father sponsored his child's friend. Someone who was in a position to know who paid for whom told me that it wasn't an isolated incident. In Hong Kong in those days, many people had gone through war and being refugees, even if they prospered later. Maybe those who take good fortune for granted and put others down might be the majority but not all the privileged are morally bankrupt.  On the other hand, once I went to apply for a scholarship and the man administering the charity put pressure on me to co-operate with his filthy desires.  He was not a local, or he would have known that kids from my school were notoriously hard to intimidate. I walked out, but in colonial society you didn't rock the boat. Maybe by not kicking up a fuss, I'm responsible for other people being harmed by that man,  other people who were more desperate for a scholarship than I was, and more intimidated by white guys in suits. but he was exploitative scum, who used charity as a cloak for his bullying.