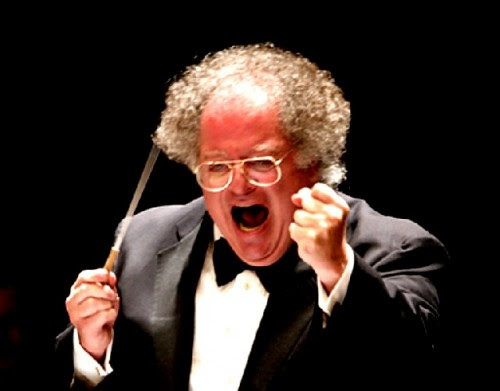 Conductors seem to live forever, like Takashi Asahina who was on the podium til age 93,  In comparison, Levine at 70 is a mere babe. But Levine's return raises many questions. He's an icon because he's been at the Met for more than 40 years. Powerful symbiosis between man and house. Levine's doctors say he's fine to work again so that's good news. Levine's raring to go. "It would be torture for him not to conduct", sources say. Good spirit!  In an era where employers get away with treating employees like disposables, the way the Met has cared for Levine has been almost miraculous.

When Levine returns after three years away the audience reaction will be astonishing. Massive sympathy, massive support. But it is necessarily healthy for music ? Perhaps Levine will pick up again rejuvenated. Star performers are always bankable, because even past their prime, people want to hear them and bask in the memory of glory. Unlike singing, conducting doesn't depend on physical fitness. But it does demand creative prowess. No-one would begrudge Levine a graceful retirement and a gradual return, so maybe he has a long term strategy? Running an opera house that size, with that much influence, means a lot more than more-of-the-same. Does the Met itself have long term vision?  We aren't privy to the internal politics in the Met, but what might be happening behind the scenes? In big organizations, it's rarely up to individuals.

The Levine/Met symbiosis is interesting also because it illustrates the different demography betwen US and European classical music. In Europe, there are many more orchestras, opera houses and conductors in a relatively small space, compared with the US. In Europe, opera going isn't necessarily associated with social status. When there's so much choice, momopoly situations don't happen so easily. And with more choice, more challenge.

Email ThisBlogThis!Share to TwitterShare to FacebookShare to Pinterest
Labels: Met the