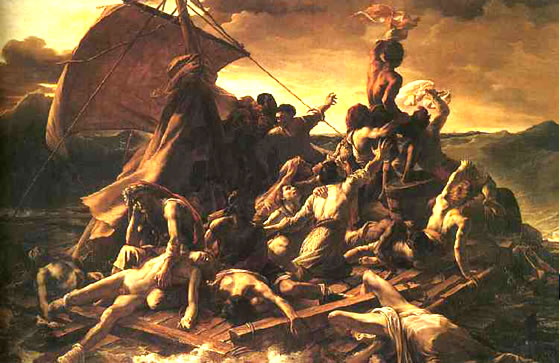 Hans Werner Henze on the scandal surrounding the first performance of Das Floß der Medusa (the Raft of the Medusa). In April, 1968, "Red" Rudi Dutschke, demonized student leader, survived an assassination attempt by a neo-Nazi. Henze helped Dutschke and sheltered him in his own home, attracting the kindly interest of the local police. That summer, Henze had written an article about the arts and revolution, in which he linked culture to social equality. "I most certainly did not mean international Stalinization or some such other horrific scenario". But in the paranoid atmosphere of the time, tempers ran high, and with that fear, denunciation  and self interest.  According to Henze, Luigi Nono and Peter Weiss had written letters in defence, but Theodor Adorno refused because he "could not consort with Communists". "Today", said Henze in his autobiography "we can see the cultural misunderstanding that obtained at the time for what it was - stupid and arrogant - but at that date...how difficult it was to explain....the wrongs that had built up over the years".

At a performance of his Second Piano Concerto on 29/9, Henze noticed that the orchestra refused to applaud. "It was because of my world revolution", he said he was told. Soon, there was a "media campaign" against him "by a "ghost writer also active as a composer" and a Hamburg journalist who attacked Henze "pillorying me and  the artistic ideas in the score of Das  Floß der Medusa, a work which, as yet unperformed, they could not possibly have known." During rehearsals, there were rumours of possible trouble. "Throughout this period, I felt as though I was cut off  from the rest of humanity and utterly on my own".

He describes the night of the premiere : "There we were, waiting backstage - Charles Regnier (Charon),  Edda Moser (Madame la Mort), Dietrich Fischer-Dieskau (Jean-Charles),  and I, ready to go on, but no-one came to fetch us, ...through a chink in the wall, we could see that something was wrong in the hall. People were standing around. Had there been a problem with tickets?........ later we discovered that plain clothes detectives were in the audience, keeping an eye out for rebellious-looking types would that be my claque or my critics? Since no-one came to fetch us, the four of us decided to go out on the platform on our own. After all, the power of music, or at least the power of musicians  might have been sufficient to restore a semblance oforder, And so we set off, the soloists ahead of me, with the result that they were unaware of a man in a grey suit detaining me and saying that if I did not remnve the red flag  that was then being unfurled on stage, I would be held responsible for the consequences. .....In a flash, I realized that it was important for my whole future as an artist and as a member of civilized society, to react impeccably towards this obvious provocation.... I could also have said that I was there to conduct, not to keep the place clean..."

" I  mounted the podium and asked for silence  in the hall...... I raised my baton for the first entry. It was then that I heard a chorus of voices, at first pianissimo, then increasinglu audible. Where was it coming from? I could scarcely believe my ears, it was coming from the platform. The ladies and the gentlemen of the RIAS Chamber Choir that had come to Hamburg  from Berlin ...with whom I had often worked in the past  on terms of perfect amity were chanting in unison "Get rid of the flag!"...."

"A violent off-stage discussion now broke out. The chorus said that they could not bring themselves  to appear on stage with the red flag, the very flag that fluttered from the Brandenburg Gate in Berlin. By now Fidi too was worked up  and announced that this was the last time he would allow himself to be led up the garden path by me. I was so shocked by his remark that I forgot to ask when the previous occasion had been. ...What garden path? But before I could  think of an answer, Frau Moser broke in and threw her arms around me explaining that whatever happened, she would always stick by me. All this happened in the green room within a matter of seconds, while outside in the hall riot police were starting to launch their attack. That they were already on the scene was due to the fact that they had been stationed in an adjoining room since before the start ofv the concert, ready for action with their clubs and shields and riot gear..... "

"But why, I wondered, had Mr Plod entered the fray? I returned to the platform to find that the orchestra had left... Finding a microphone, he tried  to protest the police intevention, but before he spoke a word, the mike was wrested away. "Meanwhile, at the entrance, representatives of different schools were laying into each other...There was total confusion, brute force was used, and a number of arrests were made. Ernest Schnabel may have been a former controller of North German Radio, but that did not stop him from being thrown through a plate glass door by a representative of the forces of law  and from being locked up in a cell for opposing the state's authority. He had tried to stop the fighting. The red flag was torn to shreds. One thing that I did not see that evening  and discovered only from a photograph  in the newspaper, was a further poster attached to the conductor's desk on which someone had daubed the word "Revolutionary" followed by a question mark. What was meant by this and what happened to the poster are questions I have never been able to answer".

".....I spent the evening with some acquaintances in Poseldorf....in the same street as the one in which some old friends  from the music world live. They were at home, I saw the lights on, and I knew that they knew where I was , but none of them made any effort to telephone or call around."

The next day, the programme director of North German  radio apparently told a press conference that "for the next ten years, Henze would be dead as far as the German music scene was involved" and tried to charge Henze for damage to the hall. "At the time I thought the whole thing risible, and shameful, unnecessary, mismanaged  and mean. Time has done nothing to alter that position".

This incident is critical to an understanding of Henze's career. Whatever the details it's clear that Henze was also traumatized by a sense of personal betrayal. He was getting stick from all sides, Far Right, Far Left and points between.  Notice the poster with the question mark after the word "revolutionary". There's no evidence that Henze was complicit, and he emerged greatly damaged by the taint of scandal.  There's a brief hiatus in his output during 1969, which wasn't really broken until El Cimarrón (The Runaway Slave) and Henze's Sixth Symphony. In both cases he reaffirms his ideals and doesn't compromise for the sake of popularity.

One can completely understand the actions of the Berlin RIA Choir, since their city was still brutally divided. For them, the traumas of the past were still open wounds.  But the sudden change in Henze's position is harder to explain. No-one could claim not to have known what Henze's politics were. Das Floß der Medusa is an explicit condemnation of the exploitation of the poor. It was even dedicated to Che Guevara. Perhaps people like revolution when it's sanitized and defanged, like wearing a Palestinan headscarf shows ones credentials without actually having to care about the issues. While Henze was being demonized,  Leonard Bernstein was admired for flaffing about with Black Panthers, who had no illusions about him.  Henze was lionized when he was fashionable and could guarantee those around him fame and fortune. But once he was demonized, the fashionable fled. That I find more shameful than those who objected to his politics.
at October 29, 2012