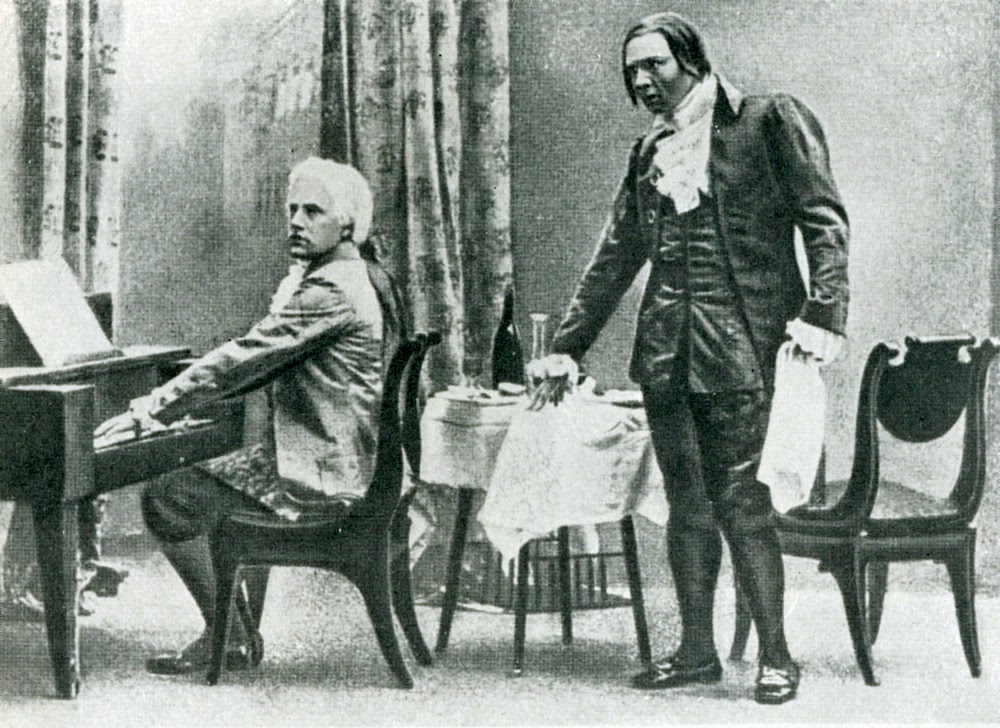 Nikolai Rimsky-Korsakov's opera Mozart and Salieri (1897) received its first ever performance at the Royal Opera House as the highlight of Meet The Young Artists Week at the Linbury Studio Theatre.

Salieri is jealous because Mozart makes composing look easy. He poisons Mozart but weeps, since he's reading the score for The Requiem, presumably overwhelmed by its beauty. We know the plot is fiction, but the text is by Alexander Pushkin, who lifts it above maudlin melodrama. Salieri can kill Mozart but he can't kill his art. In destroying his rival, Salieri has compromised his integrity. "Can crime and genius go together?" he asks himself, and consoles himself with the thought that Michelangelo  killed his model for the crucified Christ to get a better likeness for death.  Does art justify murder? Pushkin and Rimsky-Korsakov possibly knew the tale was untrue, making Salieri's excuse highly ironic.

Mozart and Salieri is unusual. The part of Salieri so dominates the work that it is more psychodrama than opera. Mozart and Salieri barely interact. Mozart isn't a character so much as the embodiment of music. The real protagonists here are Salieri and the orchestra. At critical moments, Rimsky-Korsakov adds apposite musical quotations. Moments of Cherubino's Voi che sapete convey Mozart's youthful impudence. Fortepiano melodies are played, and shrouded figures sing excerpts from Mozart's Requiem.  References to Salieri's opera Tarare and to Beaumarchais and Haydn are embedded into text and orchestration, expanding Salieri's monologue. He can "hear" but he can't create like Mozart can. The Southbank Sinfonia was conducted by Paul Wingfield, with Michele Gamba playing the keyboard Mozart is seen playing invisibly on stage, his hands lit with golden light. A magical moment.

Ashley Riches sang the demanding role of Salieri. His experience and skill come over well, even though he's been a member of the Jette Parker Young Artists programme for barely a month. Later this year, he'll be singing parts in The Royal Opera House Robert le Diable, Don Carlo and La rondine, and covering the title role in Eugene Onegin.  In this opera, Mozart isn't given much to sing, and the range in the part is limited, but Pablo Bemsch developed the role purposefully through his acting. Salieri thinks Mozart is skittish: Bemsch with sheer personality shows that Mozart is a stronger character than Salieri could ever fathom. Bemsch is a second-year Young Artist and has been heard extensively. He's covering Lensky in February 2013.

The Jette Parker Young Artists Programme isn't just for singers but focuses on theatre skills. This production was one of the most sophisticated I've seen for a group with these relatively limited resources. Sophie Mosberger and Pedro Ribeiro designed an elegantly simple set, which suggested that Salieri, despite his  wealth and status, was a fundamentally isolated man. The little puppet figure buffeted by figures in the darkness suggested that both Mozart and Salieri were victims of forces greater than themselves. Exquisite lighting by Warren Letton, colours changing as mysteriously as the music. A stunning finale, where the dark figures singing the Requiem move around lighted candles. Since financial problems will haunt the opera world for a long time to come, this restrained but poetic minimalism may be the way ahead. This production was intelligently thought through, and musically sensitive.

Before Rimsky-Korsakov's Mozart and Salieri, we heard Mozart's Bastien and Bastienne, written when the composer was twelve years old. It's a slight piece about a courtship between shepherd and shepherdess. Staging this literally would expose the weaknesses of the piece. Ribeiro and Mosberger set the Singspiele in a vaguely industrial landscape, which added much needed good humour and gave the singers more material with which to develop character. The trouble is, neither Bastien or Bastienne are much more than stereotypes. David Butt Philip, another new Young Artist, generates interest with his voice though the part is shallow. Dušica Bijelić sings sweetly but needs to project more forcefully. Jihoon Kim made a much more convincing portrayal of Colas, the wise older man who sorts things out. He was a striking Hector's Ghost in the Royal Opera House Les Troyens in June 2012, and will be singing in several ROH productions in the 2012/13 season.

The photo show Chaliapin singing Salieri in an early production.
A ful review with cast list will appear in Opera Today.
at October 18, 2012