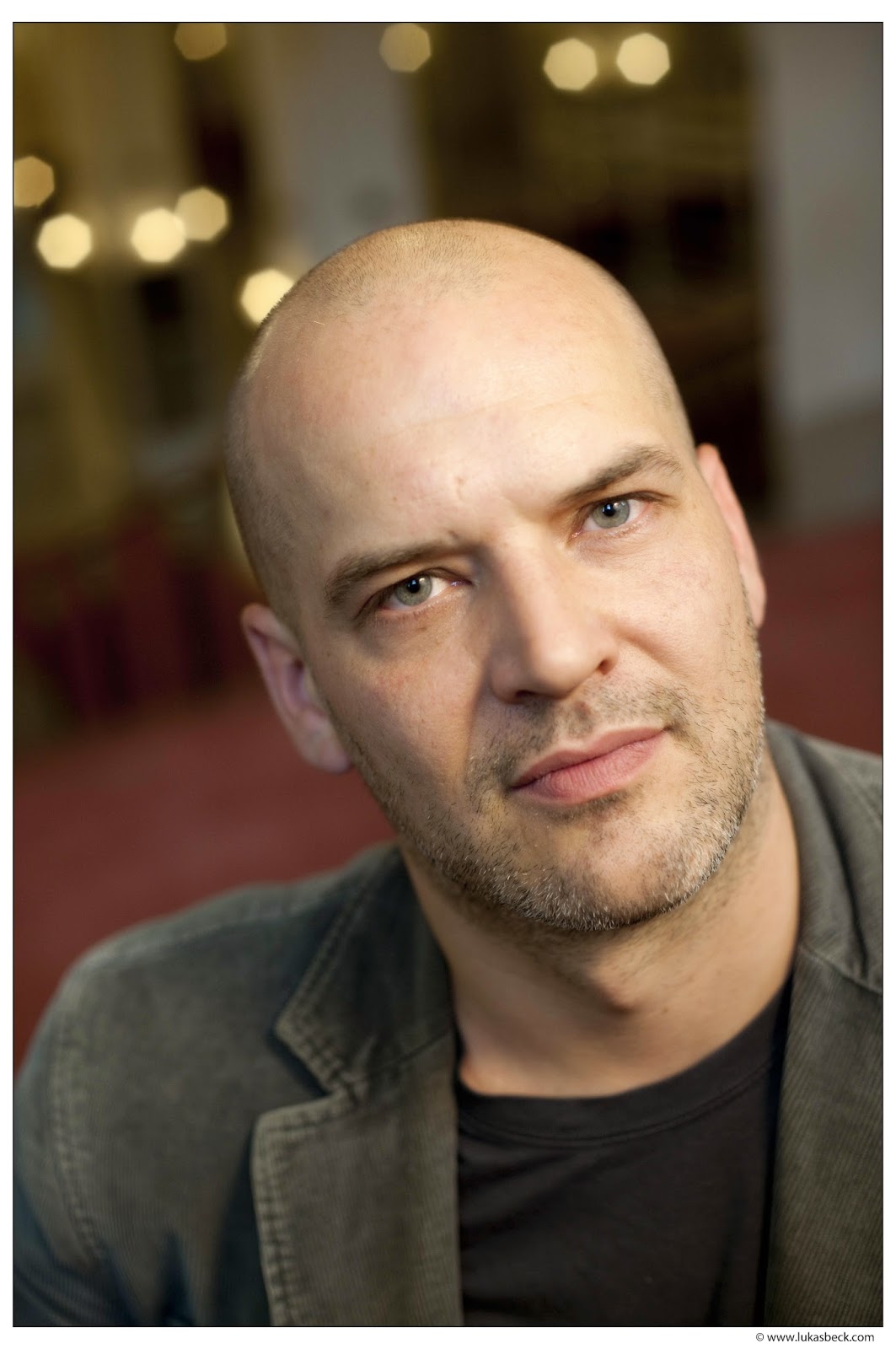 Florian Boesch and Roger Vignoles at the Wigmore Hall in Ernst Krenek Reisebuch aus den österreichischen Alpen. Matthias Goerne has called Hanns Eisler's Hollywooder Liederbuch the Winterreise of the 20th century. Boesch and Vignoles showed how Krenek's Reisebuch is a journey of discovery into identity at an era of extreme social change. It is a parable, indeed, of modern times.

Before the recital, Boesch and Vignoles spoke  for about 15 minutes, explaining the context and imagery which are fundamental to a true understanding of the depths of this piece, which is unusual though by no means a rarity.  If only more performers were as articulate as they were, since the better informed an audience is, the more they'll get out of a performance. Although this recital was one of the highlights of the year, the Wigmore Hall was only half-full, since the Royal Opera House Andrea Chénier was being screened elsewhere. Here is a differemce  between Lieder and opera, even if some do not understand. The Wigmore Hall's reputation has been built on very high standards. Boesch and Vignoles gave the core Wigmore Hall a challenge to rise to.

"Ich reise auf, mein Heimat zu entdecken". From the outset, the 'Motif ' makes it clear that this is a voyage of self discovery, not sight-seeing. Specifically, Boesch quoted from  'Auf und ab', where the tourists were guided by the "durren Weisungen  der Reisebücher, Alpenführer, Fahrpläne und  Prospekte". Spouting received wisdom, they don't think for themselves. They take photographs of each other "und dahinter auch wohl einen Berg und sehen nichts" They've travelled, but haven't engaged with experience. "Gelangweilt verhüllen die grossen alten Berge  ihre Häuptter, wenn die Põbel ihnen auf die Füsse tritt.".  A metaphor for the Lieder ethos, where what you get equates with what you put in of yourself.

Krenek grew up in the comfortable certainties of pre-war Vienna. Everything changed with the collapse of the grand Empire. Austrians were cut of from  "Welschland", the Süden, and to the idealized image of southern climes which runs so strongly through the Northern European imagination, from neo-classical times, through Goethe and to the late Romantics. Imagine Hugo Wolf  cut off from his dreams of the South.  How then should Austrians come to terms with an  identity within narrow borders, and  a new relationship with Germany?  Furthermore , the 1920's were a time of rapid social change. Krenek himself was part of the avant garde, incorporating jazz into classical tradition. The image of a black saxophonist, which so horrified the Nazis, has its origins in Krenek's Jonny spielt auf.   When Krenek journeyed to the Alps, he wasn't sight-seeing, but observing. 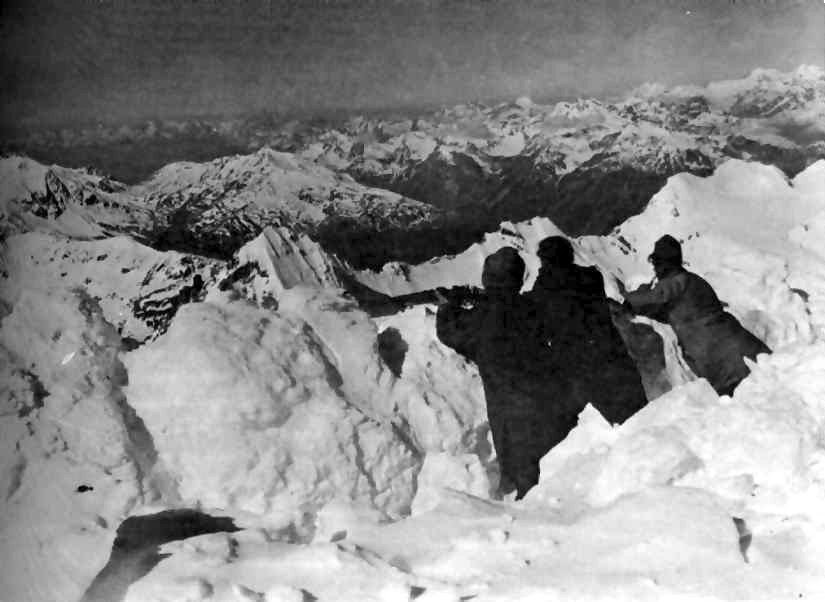 The Reisebuch aus den österreichischen Alpen  meant so much to Krenek that he wrote the texts himself, as rapidly as he wrote the music. It's hard to stress enough the importance of context and extra-musical meaning. Boesch referred to the "blutigen HansWurst", the evil clown of German language satire. When he's mentioned in the song 'Politik', with specific references to war and mountains in the west (Bavaria) , the implications are clear. "Beendet die Todesmaskerade". Miss that reference and miss much of the point of the whole cycle. Indeed, this song could hardly be more trenchant or specific. the empire was called on to shepherd the people of the south and the east,  but "Wir haben die Aufgabe nicht erfüllt". The punishment was war and deprivation. Cut off by trade blockades, civilians starved. In the Alps, as Krenek and his contemporaries knew only too well, there was warfare as savage as anything on the Western Front. Trench warfare,  but in deep snow. And this in a region where Italians and Austrians had more or less peaceably co-existed. Krenek emphasizes the difference between genuine love of homeland and the "Blutige Gespenst" of extremist nationalism. Hitler couldn't come to terms with the new, truncated Austria. As Boesch said, it might well be that "Das Nahe, Kleine, Einzelne empfiehlt sich der Betrachtung".

Krenek was also paying homage to Franz Schubert.'Unser Wein (dem Andenken Franz Schuberts)' is the most "Schubertian" song in Krenek's cycle, with its images of golden, lilting lyricism, but it would be wrong, I think, to look for simplistic connections. Krenek visits Schubert territory, but from new perspectives, a far greater tribute than mere quotation or imitation. On the surface, the poem purports to be about wine.  In the context of the rest of the song cycle, its real meaning may be more complex. Austrian wine "ist kõsstlich unser Wein nur dem, der ihn zu finden weiß". Outsiders may not know it because it's "anspruchslos im Äußern ist die Gabe" ie, not mass-marketed for unquestioning hordes. Schubert's idiom is also too pure to lend itself to vulgarity. Images of distorted music occur several times in the cycle.  Trashy Schlager played on scratchy gramophones, a  small town band plays "feurige Weisen, ein bißchen falsch, ein we it schnell", Even in 'Unser Wein', the melody is ever so slightly out of kilter. But that's the point. When the whole world is off balance, how else can things be?

Krenek writes in a thoroughly modern (for his time) idiom. His quirky phrasing creates disconcerting undercurrents which express the unease inherent to meaning.  Syncopation creeps in, as if mechanical processes are disrupting supposedly natural smooth flowing lines. Krenek describes speeding trains,  revving motorcycle engines, and even the sound of heavy cars skidding on rutted roads. Krenek alludes to Schubert's penchant for repetitive motifs, but gives them tensions that suggest mechanical, impersonal processes. Krenek's music rises up the scale and expands in volume, then does sudden switchbacks. changes direction and abruptly breaks off.  Krenek was a lifelong modernist, and a devotee of dodecaphony. He acknowledges the past but is driven, inexorably, forward. In Reisebuch aus den östereichischen Alpen, he shows that  there are many other means (eg, tempo, pauses and rhythms) which a composer can employ to make his music distinctive. Tonality, as such, is neither here nor there, and can be stretched in highly individual ways.

In 'Ausblick nach Süden', Ktrenek lovingly looks back, but knows the dream must end. A thistle cannot become a rose even when transplanted to an ideal garden. As he speeds home on the train, he ponders the "Schmerz der Vergänglichkeit", the "pain of transistoriness," as he put it himself.  The song ends with a glowing, rising figure, expanding on the word "Heimat", as if by illuminating it in this way,  its beauty might seem its attainment. But then comes the 'Epilogue', dispelling easy answers.

The musical language Krenek employs in the 'Epilogue' is so unusual and so individual that there's nothing quite like it in the art song repertoire  The piano tolls ominously. The voice part unfolds, almost bereft of accompaniment. Plaintive declamation, suggesting ancient plainchant. Are we at last approaching the secretive wisdom the monks in 'Kloster in den Alpen' didn't waste on gawping tourists?  "Seltsam ist die Strasse, die hinführt". The landscape here is alien, urban, and industrial, yet here Krenek finds a resolution.

Throughout the cycle,. Krenek hints at images of death. Wine cellars are cold and silent, like tombs, "wie die Gräber orientalischer Kõnige". The King who is sleeping here is wine.  This "tomb" has a purpose,  for it's part of the process of creation. Good wines need to mature to develop. Quite the opposite of the instant expertise of the tourists in 'Auf und Ab', who mistake data for genuine wisdom.  In 'Unser Wein', Krenek contemplated Schubert. In vino veritas. For thousands of years, wine has been a symbol of free expression. It's  a perfect metaphor for creativity. The image of the wine cellar also connects to the image of mountains as ancient fastnesses, under which, in Alpine legend, mythic powers dwell. The 'Epilogue' thus draws together many strands from the songs that have gone before, while heading forth in a completely new direction.

At the gate to the wine cellar is an inscription, probably carved deep into the wood  in archaic Gothic script. "Ich lebe, und weiß nicht, wie lang. Ich sterbe, und weiß nicht, wann.   Ich geh'  und weiß nicht, wohin. "  A simple ditty, yet one which conveys existential angst,  the "Ewiger Zwiespalt der Kreatur!". For the first time in this cycle, Krenek repeats words, as if ruminating.  Boesch sang with measured deliberation, enhancing the effect. Perhaps we don't need to know the answers to life, but still find happiness where we can.

Boesch brings exceptional authority to his traverse of Krenek's Reisebuch aus den österreichischen Alpen.  At the heart of  this amazing song cycle lies anguish and protest. Boesch's phrasing was uncompromisingly direct. He didn't mitigate the violence in the background, so fundamental to the whole meaning of the cycle.  Yet, warmed by the richness of his Austrian burr,  his singing glowed with gentle humanity.  Perhaps that's the key to the resolution Krenek finds in the 'Epilogue', and also, possibly in Schubert. Ostensibly simple things sometimes hold clues to the vast questions of life. Perhaps that was just as well for Krenek, who was forced into exile by the Anschluss and thereby lost his physical Heimat less than 10 years after writing the Reisebuch aus den österreichischen Alpen.

This review also appears in Opera Today. Please also see my other posts on Lieder, on MOuntains in Music usw
at February 01, 2015