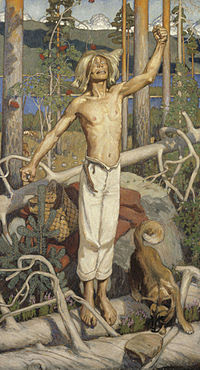 What's happening at the Edinburgh International Festival 2015? An announcement has been doing the rounds but it isn't a season announcement.  M\aybe any publicity is better than no publicity but what does that tell us about the new management under Fergus Linehan. Maybe they're aiming at the tourist market who book for the experienece, rather than for the music. EIF is very much a feature of the tourist circuit. Australians, for example, don't come of age unless they go there. Americans tend to do Stratford-on-Avon

So the EIF is getting Lang Lang, Vassily Petrenko, Anne-Sofie Mutter, and a mix of largely un-named "Scottish" and "young" performers. That's all very nice, but for a festival that purports to be "International" shouldn't it be offering a bit more? Luckily for the rest of us, the BBC has been broadcasting about a dozen concerts a year, a very important extension of the festival's reach.

The really exciting news is that the EIF is doing Sibelius Kullervo to mark the 50th anniversary of the Edinburgh Festival Chorus, and also Berlioz Grand messes des morts.  The former is quite a coup since the piece was only put back into circulation some 20 years after Sibelius's death, for many reasons.  It's a remarkable piece with all the pros and cons of being a very early work - raw, passionate and in many ways so wild that one might imagine some of the reasons for its suppression.  Again, a great thing for the EIF Chorus, but who are the soloists  ? If the EIF had musical nous, they'd market this more.

*Musical firsts* are the world premiere of André Previn’s Nonet   and the Scottish premiere of Festival co-commission James MacMillan’s Second Percussion Concerto., the latter being significant given MacMillan's role as the best-known Scottish composer. No Judith Weir, whose explorations of Scottish stories would be fascinating for locals and visitors alike.  Only a vague hint as to what else is on offer :  "Stories of love, money, magic and ghosts come alive in major narrative musical works including The Rake’s Progress, Kullervo and Petrushka.  Since Kullervo features rape, incest and suicide, those who come for love might be shocked.  So we'll have to wait til March 18th to find out more.