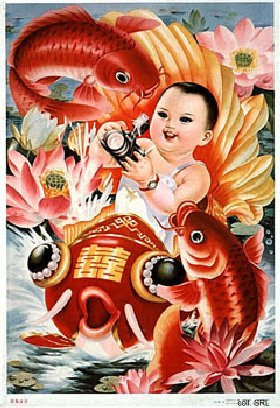 First Day of the Chinese new Year - Kung Hei Fat Choy ! Above, the kind of poster people used to paste onto their walls to bring good fortune in the coming year. The fish represents wealth, abundance, liveliness and flowing energy. So the baby rides a giant carp with the character for happy marriage on its head (happy marriage equals fertility and the continuation of family line).  Its eyes are encrusted with pearls. Lotuses, which rise again after spending the winter buried under mud.  They're beautiful, and edible, too. The kid wears a watch and carries a camera. Also symbols of progress and success. Foreigners might laugh, but for millions of Chinese people, grinding poverty was the norm. . For the poor, posters were a bright symbol of hope. The trauma of the last 100 years in China was horrible, but the west took a lot longer to come out of the Middle Ages (though I'm beginning to wonder)   A friend told me : "Cameras and watches  Now even in the remotest provinces, peasants have smartphones". Thirty years on from Tienanmen Square....."
at February 19, 2015