Opera Houses and Houses for Opera 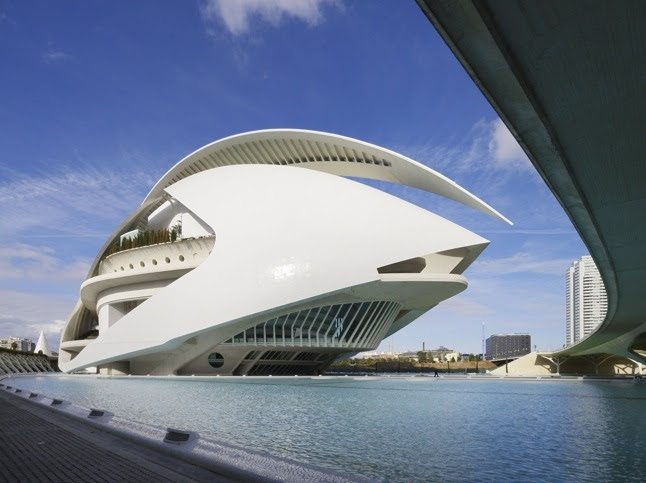 Imagine an opera house lilke this on the banks of the Thames. It's the home of the Valencia Opera,  designed by Dr Santiago Calatrava, completed in 2007. It's so beautiful that perhaps it should be part of the international opera circuit. But what really makes a house is what happens inside. In the current non-debate about the ENO there have been calls to turn it into a trendy café or to scrap the building altogether. Are things that easy ?

Firstly, the deal with which the ENO occupies the Coliseum means that it doesn't have to pay commercial West End rents. It might move somewhere less convenient, thereby driving away part of the audience, changing its demographic, which has a knock-on effect on what it does, artistically.  Even if an alternative place could be found, there's no guarantee that the Coliseum could be sold profitably enough at short notice to make the transition worthwhile. Though, quite possibly, there are those who would welcome the chance to profit from a bargain, if such a sale were forced.  Not good for ENO, though.

Second what you see upfront in an opera house is only the surface: backstage is a warren of workshops, rehearsal rooms, technical support, dressing areas etc. Which is why most houses outsource so much to other premises.  Part of the ENO business plan is to consolidate this support in one area, but that might be asking too much.  Thirdly, the Coliseum is the largest theatre in London, and never easy to fill.  Most West End theatres are significantly smaller, and most shows don't run into profit unless they've been going on a long time. Do we really want a single opera to run for months, exactly the same every night  How would that affect singers and players?  At the other end of the scale, what about the Raymond Gubbay route, filling the Royal Albert Hall with water to do Madame Butterfly for people who don't actually like music but want a good night out.  Which is fair enough, but art it ain't.  The ENO can't really move back to Sadler's Wells, which is way too small. Shows may sell out in small spaces but so what if the overall take is reduced? Quality cannot be judged by capacity figures alone.

Perhaps the elephant in the room is, after all, changing audiences. The last ten years have seen a disintegration of the values of tolerance and openness. Where once some could preach "the End of History", now we're plagued by ignorance, bigotry and fundamentalism of all kinds.  Once, mature thinking came gradually, through a process of listening and learning. Now anyone can be an instant expert  thanks to Google and mass media.  So maybe the battle for the arts is already lost.

HERE is a link to an informative article in the Economist about opera as a business. Opera houses operate in co-operation with each other.  Scrapping one house impacts on the whole industry, worldwide.  Much of the current non-debate focuses on micro issues, like not liking a composer, or details of particular productions, when what we really need is an appreciation of how the business works. A few weeks ago, I addressed some of the issues here, in my article "Radical Rethink".
at February 15, 2015

I always enjoy your thoughtful
and timely articles, thank
you again, Anne!