What Simon Rattle could do for the nation

What's ahead for Simon Rattle?  When he steps down in 2018 from the helm of the Berliner Philharmoniker, the most prestigious job in the whole business, he'll be 63, much too young to  retire, Besides, he's such a dynamo, it's hard to imagine him lazing about. Conductors don't usually stop unless they have to, either like the inimitable Carlos Kleiber or like Takashi Asahina, who was conducting almost to the day he died, aged 93.

So what's next for Simon Rattle? There have been rumours for ages that he'll take over at the London Symphony Orchestra, which isn't nearly in the same league as the Berlin Philharmonic, but then nothing is. In any case, there'd be a gap in the succession, since Gergiev and Harding are due to step down at the end of 2015. At this level, interim arrangements are hard to arrange. Salonen's contract with the Philharmonia ends 2017, while Jurowski's with the LPO has been extended to 2018.  Conductor chess also has to take in other changes on the European circuit. What if Thielemann gets Berlin? Or Nelsons? Barenboim might want the job, but who knows?

Rattle's been quoted as saying he'd like a new concert hall in London  Oh yes, we do!  So much has changed in acoustic engineering and architecture since the Royal Festival Hall and the Barbican, so the case for a state of the art flagship for London is pretty clear.  But in the present circumstances, where the anti-London bias prevails, that's problematic.  But you can't slot a new mega hall in just anywhere: it has to be central enough to be within reach of most of the population, and connected to the international circuit. Effectively that means London. Politicians like big capital projects because they win votes and mean largesse for contractors and so on.  But so what, if the whole reason for having a concert hall is being eroded, with cuts to funding for orchestras, without proper school-based music education, and with the BBC/Arts Council fixation on easy listening?  The ACE has slashed the Barbican's budget almost as savagely as it's slashed the ENO's, though the cuts are spread over different genres.

Even if a few hundred million could suddenly be magicked up, what about the commitment to support and endorse the performers within?  It's good software that makes things happen, whatever the hardware. Boris Johnson's  vanity project "Olympicsopolis"  doesn't even come close to addressing the real issues of the music  business. And even if Rattle won his point, it would take 25 years to fulfil.  Like, when he is 84. 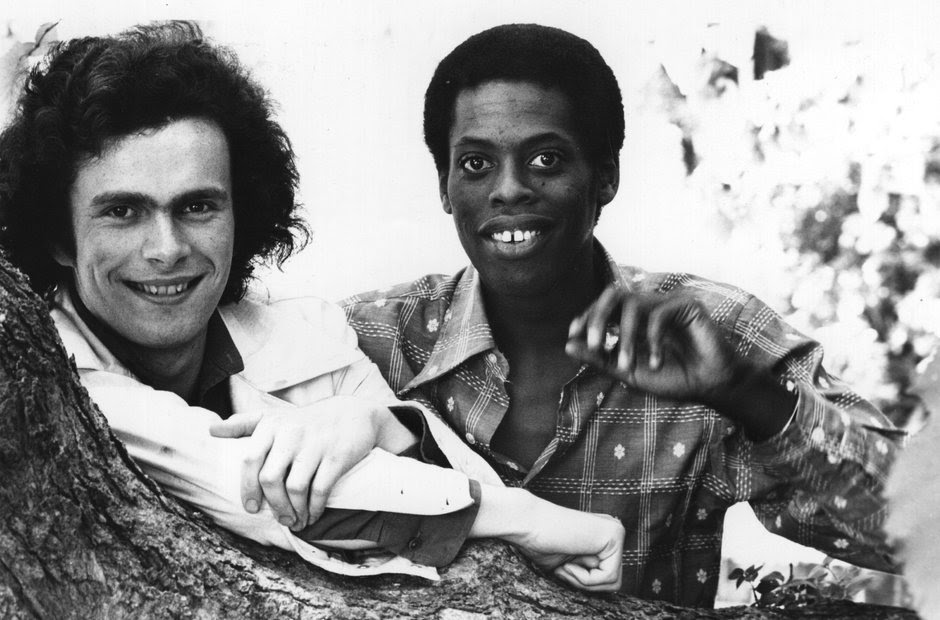 In Birmingham, Rattle transformed the landscape, showing how  culture can benefit a city's identity and economy. Now London needs a charismatic communicator who can reverse the trend towards philistine destruction. London, and the nation, needs Rattle more than he needs us. I'd like to think of him  slacking off and playing with the kids, but he is much too precious an asset to miss out on.  At left, a photo of Rattle and the American conductor Calvin Simmons in 1975, when Rattle was conducting Glyndebourne. Simmons died aged only 32. Honour conductors while you can.
at February 17, 2015