First Night of the Proms 2015 A Feast of Belshazzars 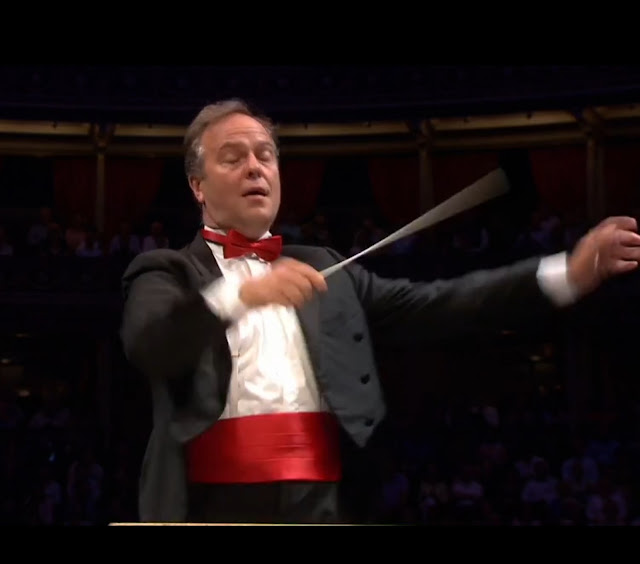 First Night of the BBC Proms 2015 with Sakari Oramo in exuberant form, pulling off William Walton''s Belshazzar's Feast with the theatrical flair it deserves. It''s a grand blockbuster on a biblical theme, but it's by no means part of conventional British choral tradition  Elgar, who was still alive when this was written in 1931, could not have tried anything like it at the Three Choirs Festival, and Benjamin Britten, I suspect, would have cringed at its excess. But think back to Facade: an Entertainment, (more HERE) with which Walton burst to notoriety barely six years before the BBC commissioned him to write for orchestra of "not more than 15 players". Instead Walton created the extravaganza that is Belshazzar's Feast.

The BBC SO trombones blasted a single, savage wail. Did we hear the sound of ancient Biblical trumpets?  "Thus spake Isaiah", sang the male chorus. but the word "Isaiah" oscillated with oddly bluesy flourish. "How shall we sing the Lord's song in a strange land? "  Oramo's ear for quirky detail highlighted how Walton adapted the zeitgeist of the Jazz Age to underline the sense of dislocation the Hebrews felt in a new and alien world.  The saxophone, the angular percussion,  the slithering  swathes in the choral parts and even the brass bands are there for a reason.

Christopher Maltman delivered the passage "Babylon was a great city" with such ferocious bite that his voice bounced off the walls of the Royal Albert Hall. The part is created completely without accompaniment to demonstrate the austere values of the Hebrew God.  The massed voices of the  BBC National Chorus of Wales, the BBC Singers and the BBC Symphony Chorus were impressive, but the heart of the cantata takes place in near silence.  Maltman described the mysterious Writing on the Wall in hushed, horrified tones. When the choruses and orchestra resumed, the crosscurrents and interweaving they made, literally, "a joyful noise", complete with a merry, jaunty dance.

Jean Sibelius's Belshazzar's Feast (1906-7) may not be scored for voice, but is highly theatrical nonetheless. Originally written as incidental music for a play,the Suite (Opus 51) unfolds like a series of miniature tone poems, each vividly expressive. The first ,"Oriental Procession" sounds exotic in the way so much western music adopts Orientalism for colour, but Oramo brought out its connection to other Sibelius works.  The prancing bell-like sounds reminded me of the "sleigh" music in which Kullervo's sister rides, clothed in finery on her fateful journey.  The slow movements, though, are even more poetic, particularly the haunting "Solitude" with its melancholy part for solo flute. The dotted rhythms and swirling lines  suggest Nightride and Sunrise. The clarinet parts were played sensually. Spoken words or sung text were rendered unneccssary in he expressive beauty of Sibelius's music.

The theatrical theme of this First Night of the Proms began with the Overture to Carl Nielsen's opera Maskarade (read more here)   Oramo has been conducting Nielsen symphonies with the BBC SO for some time, so this performance sparkled with vivacious charm and wit.  Perhaps they should do more music theatre. Dadaville, a premiere by Gary Carpenter (b 1951) was disappointingly derivative, added perhaps to fill some BBC quota of works that are newly written but not necessarily new. Fireworks as part of performance might work in something more original, but not in this case. Thankfully, Lars Vogt was a fine soloist in Mozart's Piano Concerto no 20 in D minor K466, well supported by Oramo and the BBC Symphony Orchestra. .