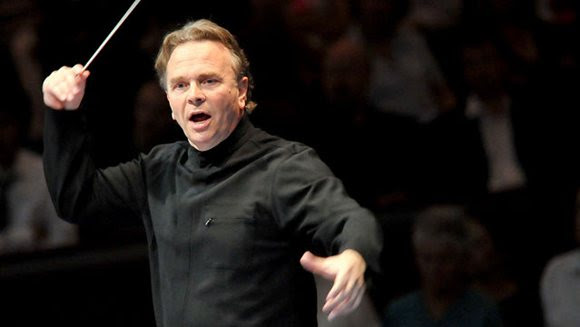 Prom 17 at the Royal Albert Hall, London, Sir Mark Elder conducting Vaughan Williams and Elgar, with the Hallé, an orchestra with a golden Elgar pedigree.  No safe complacency in this programme though, because the two main pieces confront an uncompromising aspect of the English psyche.

Starting the Prom with Debussy Prélude à l'après-midi d'un faune was a clue. Debussy, even before Schoenberg, was experimenting with tonality  and duality, breaking down the barriers of convention. The flute represents Pan,  and his disciple the faun. The flute solo was wonderful, but much of the beauty of the piece lies in its mysterious ambiguity and the multi-level interaction between the flutes and lower-voiced winds, strings and harps. The undergrowth in the forest sings, too, so to speak.

A good prelude to Ralph Vaughan Williams' Sancta Civitas (The Holy City). RVW called it an oratorio, but it harks back to the doughty non-conformism of William Blake and John Bunyan  and the militant idealism of the early Victorian age. In spirit it's akin to The Pilgrim's Progress ,which occupied RVW's mind most of his adult life. (Read more about that HERE.) The texts are drawn from the Book of Revelation, not from the Gospels, and it taps into millenialist Low Church concepts quite alien to Establishment Anglicanism. Outsider theology, which Vaughan Williams recognized, with his knowledge of High Church values and hymnal.  Down Ampney is very far away.

From mysterious low rumblings in the orchestra, the baritone, Iain Paterson called out forcefully,  "I was in the Spirit and I heard the great voice of the people praising God and singing Alleluia". The voices of four choirs rang out, the Hallé Choir, the London Philharmonic Choir, the Trinity Boys Choir and the Hallé Youth Choir, in glorious tumult.  Note the word "spirit" for in Revelation, there are seven Spirits of God.  Yet man is mortal - what gives? The mood is apocalyptic. Heralded by trumpets the massed voices sang "King of Kings, Lord of Lords".  Heavens open, and an Angel appears. The swaying cross-harmonies in the voices, and the back and forth antiphonal exchange, emphasized chaos and disruption.  The kings of the earth are displaced and evn th great city of Babylon is no more.

The middle section, the Allegro Moderato, is defined by a solo violin, whose lines soar up the register, heavenwards, a clear reference to A Lark Ascending.   Here the violin serves an extra purpose, uniting the faithful on earth (the darkly undulating choirs) with Heaven. The choirs sang "Glo-o-ory", the legato swerving with  carefully judged  waywardness. The textures are dense, but Elder and the choirmasters ensured that the intricate cross-patterns were kept distinct,  Spatial textures were well executed, too. The Distant Choir of young voices floated across the vast distances of the Royal Albert Hall. The violin leads, like an angel, towards a grand climax, a blaze of trumpets and the booming of the organ led to temporary.detumescence. From near silence, the voice of the tenor, Robin Tritschler rose, from the balcony far above the huge auditorium. "Fear not" he sang. He's an angel, reassuring the faithful that they're at one with God. But listen to that ending, where a simple, tentative line  recurs and recedes,, suggesting that, for Vaughan Williams, the agnostic, there would be no easy resolution.

More Spirits followed in Elgar's Symphony no 2 in E flat major. The composer quoted Shelley "Rarely. rarely comest Thou, O Spirit of Delight" which might sound optimistic, but the poem continues with self-doubt. "Wherefore hast thou left me now/ Many a day and night? "Was Elgar intuiting the loss of creative powers, or expressing the anxieties  that may have been part of his outwardly peaceful life? He called this symphony "the passionate pilgrimage of a soul".  Elder defined the big opening outburst with assurance, the "spirit of delight" motif descending elegantly, leading  into confident expanses of sound, suggesting open horizons and open vistas. But the brass flared up, creating a jagged air of alarm,  Trying to explain, Elgar wrote that it was "a sort of malign influence wandering through a summer night in a garden."   Perceptively, Elder conducted the ending of the first movement so it bristled, the line ripping along with haunting, almost jazz liike tension.

The Larghetto began with the expansiveness with which Elgar's music is so often associated, but the emotional temperature dropped as the tempo slowed.  Elder shaped the measured pace of the recurrent waves of sound, building up to  a crescendo which, to me, felt like a last, fond looking back on the past. The colours darkened, as if night were falling . The  Rondo has connotations of Venice,  Elgar having written, enigmatically, "Venice and Tintagel" . Elder and the Hallé created the deceptively bright spirit: one could imagine a busy city with tourists on holiday. Elgar wasn't aware of Thomas Mann when the symphony was being written, but we, inescapably, cannot miss the imagery.  The bustle and wild, whipping lines with which the movement ends certainly suggest hurried departure, which may well fit in with the idea of the death of the King to whom the piece was dedicated, and to the idea of the creative despondency Elgar was to encounter.  Moderato e Maestoso, the final movement,  was played with beautiful richness, so when its dying embers faded, the sense of loss was profound.

Elgar told the orchestra who played at the premiere: "Some of you will know that dreadful beating that goes on in the brain which seems to drive out every coherent thought.....Percussion, you must give me all you are worth!" Certainly Mark Elder and the Hallé gave all they were worth, which was a lot. The percussion didn't need to crudely drown out the orchestra, but the sense of tension and foreboding Elgar wanted was most certainly part of this superb performance. Seriously idiomatic Elgar from Elder, one of the great Elgarians of our time, and from the Hallé who've been doing Elgar since he was "new music".

Listen to this Prom again HERE