Today is Peter Schreier's 80th birthday. What an eventful life he's lived. His first professional engagement came at the age of 7 when he sang one of the child spirits in The Magic Flute. He went on to become the star of the Dresdner Kreuzchor at a period when music meant a lot in war-ravaged Dresden. What must it have been like, in those difficult times, and in the early years of the GDR, to listen to the pure, clear voices of this choir ring out, like angels? Read my piece on the Mauseberger Weihnachtszyklus, written for Christmas 1945 HERE 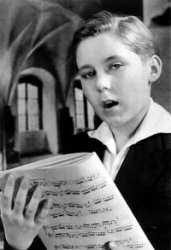 Schreier was the foremost tenor in the GDR in his era, singing almost the entire repertoire for his voice type, from opera, to baroque, to Lieder, to folk song and 20th century composers.  He even sang Benjamin Britten! East Germany was isolated from the commercial pressures in the west, and from the boom industry in recordings that fuelled popular taste, so in many ways, GDR music harked back to earlier traditions. Schreier's singing was, in any case, so pure and ardent that it transcended borders. He worked a lot in the west, often with Fischer-Dieskau and others.  What I love about Schreier's singing is the way he was so ardent: he was so passionate about what he sang. He reached emotional depths which could be unsettling, though his technical control was always refined and elegant. For me, this is the soul of Lieder, and the reason I'm not impressed by voices that are pretty but facile, however fashionable they might be.

To mark Schreier's 80 th birthday, the German website www.jpc.de is offering an 8 CD box set with an additional DVD for Euro 29.99  An amazing bargain, even if you've treasured the original Berlin Classics releases from way back when. More details here.
at July 29, 2015