At BBC Prom 15, Xian Zhang did wonders with the BBC National Orchestra of Wales . Tonight, they seemed transformed, totally energized. electrified with dynamic purpose. They haven't sounded this inspired in recent years. Something good is happening in Cardiff.

Prokofiev's Symphony no 1 in D major burst into vivacious life. The capricious high jinks in the music were expressed with athletic verve, the orchestra so together that they sounded like a single organism.  Zhang is unassuming and down to earth, totally focused on music, rather than on  persona. When the media made a big fuss about the first female conductor to lead the Last Night of the Proms, Zhang quietly said that real equality would be reached when gender isn't a novelty. In any case, we must not forget that millions of women around the world suffer far worse problems than being on a podium. Zhang clearly loves making music. and has the personality and technique to do what she does extremely well. 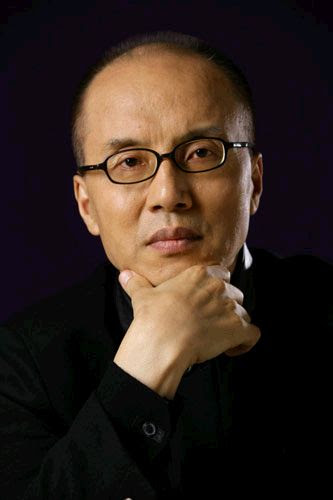 More transformation came in Qigang Chen's Iris dévoilée (2001), the composer's best-known work, receiving its much belated UK premiere.  Chen's Joie Eternelle, a trumpet concerto commissioned by the BBC for Alison Balcom featured at last year's Proms (read more here).  Iris dévoilée is a far more substantial piece and deserves its reputation as Chen's masterpiece. Unlike so much music written to bridge Chinese and Western music, Iris dévoilée fully integrates the diverse aesthetics so they work together  especially for audiences familiar with Chinese music other than pastiche. Iris dévoilée is real music that stands on its own terms. The 45-minute work evolves over nine sections, each of which describes an aspect of feminity. It's Frauenliebe und -Leben for much grander forces, though Chen is able to recognize that he's a man, observing from the outside.

The first movement, "Ingenue", describes a very young woman. The pipa, guzheng and erhu predominate, creating a sound world that suggests the purity and intimacy of  Chinese chamber music, traditionally played in private scholarly circles. This young girl is sheltered,  nurtured in purity. "Chaste" describes a slightly older woman, probably married, but still following the virtues of her class and status. Meng Meng sings a manifestation of the Jing role type in kunqu opera, the most refined and ancient of Chinese opera genres (which are all quite distinct).  Hence the elaborate makeup and costume. Chen, however, doesn't write Meng's music in true kunqu style.  Her lines  float and stretch freely, without the underpinning of percussion that gives Chinese opera its characteristic grounding. Instead we hear harps and western strings. Perhaps the "chaste" woman, here, living the life society expects of her, is inwardly trying to fly beyond ? 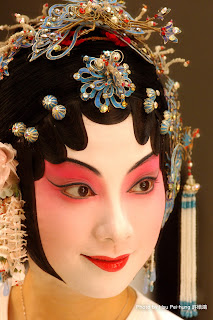 Meng's lines jump away from traditional form. She's still singing in Putonghau while the other two sopranos sang abstract vocalize, which might sound Chinese to westerners but sounds western to Chinese ears. Piia and Anu Komsi (Mrs Sakari Oramo) are highly sought after because they can both reach surreally high tessitura, and sustain lines almost beyond human endurance. Their presence in this performance is luxury casting, for few ordinary singers can do the vocal gymnastics they are capable of.  Meng, good as she is, is outclassed, but that perhaps is the inner meaning of this piece: the transformation of a virtuous  Chinese girl into a diva who transcends cultural boundaries. The Komsi twins make "Libertine" sound positively joyful.

The three inner movements , "Sensitive", "Tender" and " Jealous" are more serene, allowing Chen to write rather beautiful music, in a style that shows his total integration in French style, which has long embraced orientalisme. Chen was Messiaen's last pupil, and the influence shows. Long strident sounds introduce a complete change. A violin plays maddeningly high lines, matched by the Komsis' gravity-defying tessitura. Meng sang again, in a quite un-Chinese wail, while the plaintive sounds of erhu reawaken a sense of melancholy for a lost past. The Erhu is the most "vocal" of Chinese instruments, which when well played sounds like an ethereal singing voice. Here, the soloist, Nan Wang, was very much the fourth voice in the section.  In "Hysterical" , Meng's part becomes an aural tantrum, a manic parody of Chinese opera,

The final movement , "Voluptuous", enters with high, sensuous violin, the winds and strings creating sensual textures. Meng now sings on her own, in languid, measured vocalise. It's exotic and deliciously alien.She's become one with the Komsis, and it suits her well. They now sang what might be described as caterwauling  fake Chinese. Humourous and gaily subversive. The erhu, pipa and guzheng return, blending Chinese and western elements seamlessly together in perfect, magical integration.

Rachmaninov Symphony no 2 in E minor Op 27 followed. Gloriously played, full of colour and incident, executed with remarkable vif by Zhang and BBC NOW. A superb performasnce to which I can't do justice. Anyone can write about Rachmaninov, so I won't. Besides very few can write reasonably well about both Chinese and western music and their differing vocal values. So that's what I've tried to do.  Lots more on Chinese music, Chinese stereotypes, Chinese opera and unusual instruments on my site. Please explore.