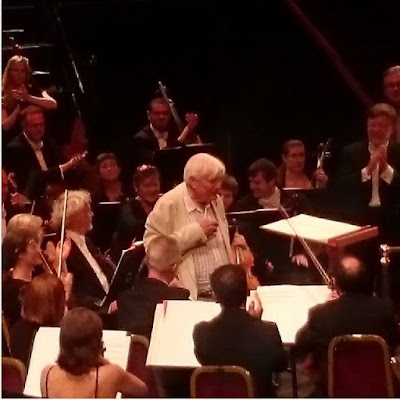 At BBC Prom 7, Andrew Davis and the BBC SO gave the world premiere of Hugh Wood's Epithalamion.  New music has always featured at the Proms. Sir Henry Wood premiered Schoenberg. Some new music becomes immortal, some falls by the wayside, some is rediscovered by later generations.  Even Bach.The Prom began with Delius's In a Summer Garden. Gardens never remain the same.  Change is a natural process that cannot be halted.  And so, too, in music. Many Proms premieres these days play safe and beget mediocrity, but Hugh Wood's  Epithalamion  is genuinely new, and refreshing.

At the age of 83, Hugh Wood's creative powers are, if anything, refreshed. Epithalamion  is one of the composer's most ambitious works yet, imaginative and beautifully constructed. The title refers to the procession of a bride to her bridal chamber. Cue the idea of flowers, happiness, and the promise of renewed fertility. The text comes from John Donne's poem of the same name celebrating a royal wedding in 1613, but the concept is universal: procreation as a metaphor for endless change and regrowth.

The voices of the BBC Symphony Chorus call out, long, soaring bright lines, impatient excitement.. Wonderful circular lines in the orchestra, curving like an embrace. Glorious bells, hushed anticipation. Donne employs images of birds, including "the husband cock".  The newlyweds are "Two phoenixes, whose joined breasts /Are unto one another mutual nests,/Where motion kindles such fires as shall give" Lines stretch out and converge, commingling with fervour. A magnificent, dramatic interlude at mid point where the orchestra seems to explode into joyous fanfare, given depth by rumbling gongs and two harps,  with suggestions of night, stars and darkness. . In the fifth section, male and female choruses separate and merge, from which arises the voice of the soloist, Rebecca Bottone, one of the finest character sopranos in the business, with a particularly fresh, energetic style. A single male voice rises from the chorus and the music surrounding takes on quite explicit sensual frisson. This is seriously good, sophisticated writing for voice, the separate parts distinct yet well blended, sometimes hushed, sometimes triumphant, but vividly dramatic and tightly scored. Epithalamion should become a regular Proms favourite.

Cylcic figures also enliven  Carl Nielsen's Clarinet Concerto (1928). The clarinet moves like a living organism, with adventurous dynamic leaps and contrasts.  Mark Simpson's playing was fluid, capturing Nielsen's open spirit. "I have such free voicing in the instruments" wrote Nielsen of this piece, "that I really have no idea how it will sound".  Hence the cadenzas and boisterous inventiveness, captured by Davis and the BBC SO and ravishing BBC Symphony Chorus with great aplomb. Back to the theme of sensual love in a vernal setting with Ravel's Daphnis et Chloé Suite no 2, Lusciously played. I'm glad that Prom 7 of 2015 was one of my top Proms picks.

This Prom is available for 30 days on the BBC website and will also be broadcast on TV from 30 July.

Many vyears ago I met Hugh Wood and we had a lovely chat. Then he found out that I was then working for some "experts" in British music. "Tossers!" he said, not quite in such blunt terms. I loved him from that moment