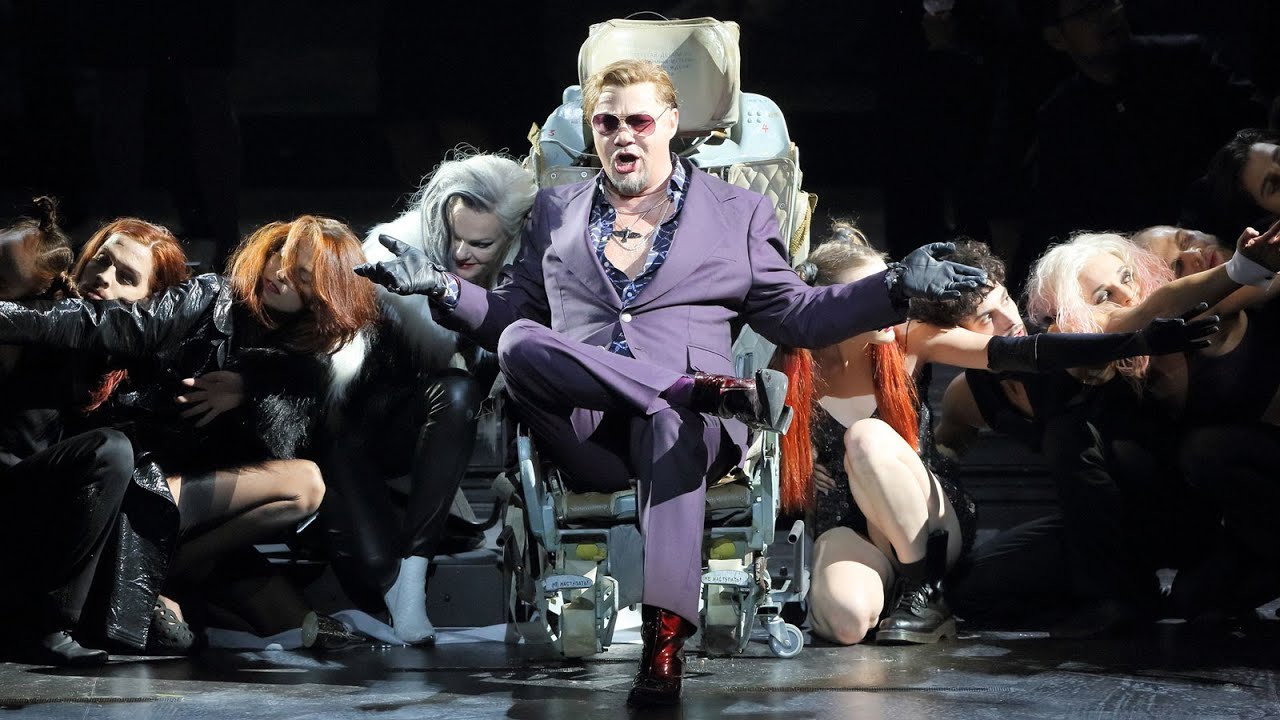 Arrigo Boito Mefistofele was broadcast livestream from the Bayerische Staatsoper in Munich last night. What a spectacular production! What an amazing cast - you could hardly wish for better! I loved the audio-only broadcast last month (read more here ) so no way was I going to miss the video version. I was not disappointed.

Boito's Mefistofele adapts Goethe's Faust to develop the idea of Mefistofele and his relationship with God.  They are equals, sort of, the Devil a punk with a huge chip on his shoulder, bristling with resentment even as he struts and shows off. Hence the sprawling set, which resembles the inside of some large structure, with pipes and scaffolding. In this sealed cocoon, Mefistofele is king though he's cut off from the real world outside where presumably God reigns.  René Pape, singing Mefistofele, is dressed part rock star, part oligarch, surrounded by groupies in an artificial fantasy world.  Are we in a film set? Or an infernal machine?   Mefistofele watches dull TV clips of John Lennon in  New York and of a plane flying over the NY skyline. We don't  see the Twin Towers, but we can draw our own conclusions without the point being made too obvious.

Like so many big shots too big for their boots, Mefistofele thinks he can have a conference call with God, and place a bet.  All the while the Heavenly Chorus sing. We don't see them, for they are unsullied by evil.  René Pape is an ideal Mefistofele - suave, slimy and tacky, with that 70's shirt open to his waist. He suggests the Devil's twisted charm, but also makes us feel sorry for Mefistofele and his ardent desperation.  This double-edged portrayal adds depth to Pape's characterization. He whips through his lines with poisonous bite, but one senses that, deep down, Mefistofele is a misguided fool. 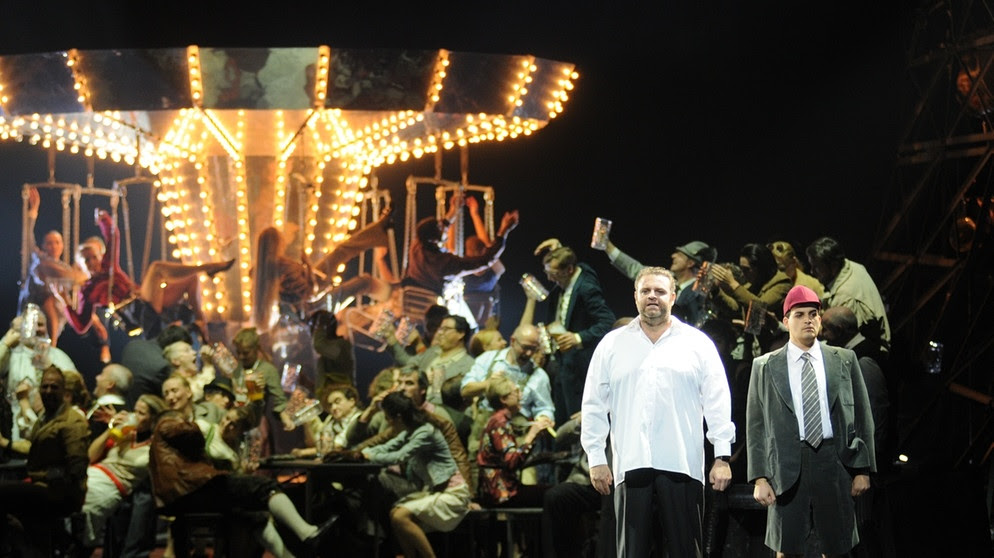 Faust, or a facsimile thereof,  is brought on stage and dressed in white, readied for sacrifice. When the orchestra, conducted by Omar Meir Wellber, begins again, the stage has been transformed, This time it's dominated by a giant fairground carousel. The peasants, as in Faust, are celebrating.  More pointed wit. This production takes place in  Bavaria. The peasants sit at long tables drinking giant steins. Pape picks up a gingerbread heart with the motto "I mog di", "I love you" in Bavarian slang.

Joseph Calleja doesn't automatically spring to mind as an ascetic old monk, but Boito's Faust is different to stereotype.  By changing the part from baritone (in the 1868 version) to tenor in the 1875 Bologna version, the composer capitalized on a voice which could scale heights even French tenors might envy, while retaining the sensual loveliness of the Italian language. Calleja hits the notes and how!  He sings with enthusiastic flourish - this is a Faust who genuinely enjoys sensual pleasures. A wizened old hermit might not understand. Calleja is also a good visual foil to Pape's sophistication: devil and innocent. Or so it seems. Calleja nails,  and holds, stratospheric heights. We can sense that a part as lovely as this will triumph in the end.

Kristine Opolais shines with understated  Grace Kelly elegance, which makes her seduction feel more like rape, for it is, since Faust is not what he really should be. The trio at the end of the scene sparks with tension  Faust and Margherita are swept away by the force of the sharp, dotted rhythms that mark Mefistofele's music.

The Walpurgisnacht scene is demonic: sharp woodwind flurries suggesting hellfire, perhaps, or moonlight? Calleja and Pape sing in tight lockstep "Folletto ! Folleto!". The manic staccato theme is taken up by the chorus, which then switches to quiet whisper, while the orchestra  creates the sprightly "hellfire" motif, first in the woodwinds, then through the celli and basses. The brightness of Calleja's voice contrasts well with Pape's, whose voice grows darker and more malevolent now that Faust is in his realm. The final chorus whips along with crazed energy: the witches are dancing wildly before the "flames" in the orchestra. "Sabba, Sabba, Saboè!"

Back on earth, Opolais sings  L'altra notte in fondo al mare and what follows with great emotional depth. Her Margherita is a woman steeled by suffering.  When she and Calleja sing Lontano, lontano, lontano, they bring out tenderness and tragedy, beauty and pain. Opolais sings the Spunta, l'aurora pallida with such calm heroism that Calleja's O strazio crudel! tears at the heart.  Faust sees the suffering, and women writhing in labour, but soon comes under the spell of Elena, Helen of Troy ((Karine Babajanyan)

In the orchestra  we hear the exquisite harp sequence, setting the tone for the love  duet between Elena and Faust that will follow. The harmony, though, is but a dream. Faust is back in his study, dimly lit, as we might  imagine from the quiet murmurs in the orchestra.  Faust is a very old man again, and in this production is seen in a home for geriatrics.  This is a sharper observation than one might expect because it shows Faust as part of a community, rather than alone, and makes connections to Goethe's Faust, who believed so strongly in society and humankind. It was Wagner (Andrea Borghini)  who thought peasants were a waste of time. This ending also emphasizes the idealism with which Faust defeats Mefistofele.  The good of mankind versus the Devil's enticements.,

"Cammina, cammina" Mefistofele calls. This time, Faust fights back. Calleja sings with undecorated, but  heroic firmness. "Faust! Faust!"  Pape cries, but his prey has slipped from his grasp. The chorus returns, in full, glorious voice with the orchestra in full glory. Even René Pape is no match.  But Mefistofele is defeated. Faust has overcome his sensual needs, choosing instead the greater good of mankind. Heaven breaks through Mefistofele's realm with blinding  light.  The director is Roland Schwab, who started his career with Ruth Berghaus. the sets are by Piero Vinciguerra.  On small   screen broadcast, we might have lost some of the overwhelming impact of the live experience, but we see the details. And what glorious singing! Later, it's occured to me that the other people in the nursing home, who were singing in the finale, might have been angels all along. (see photo below) 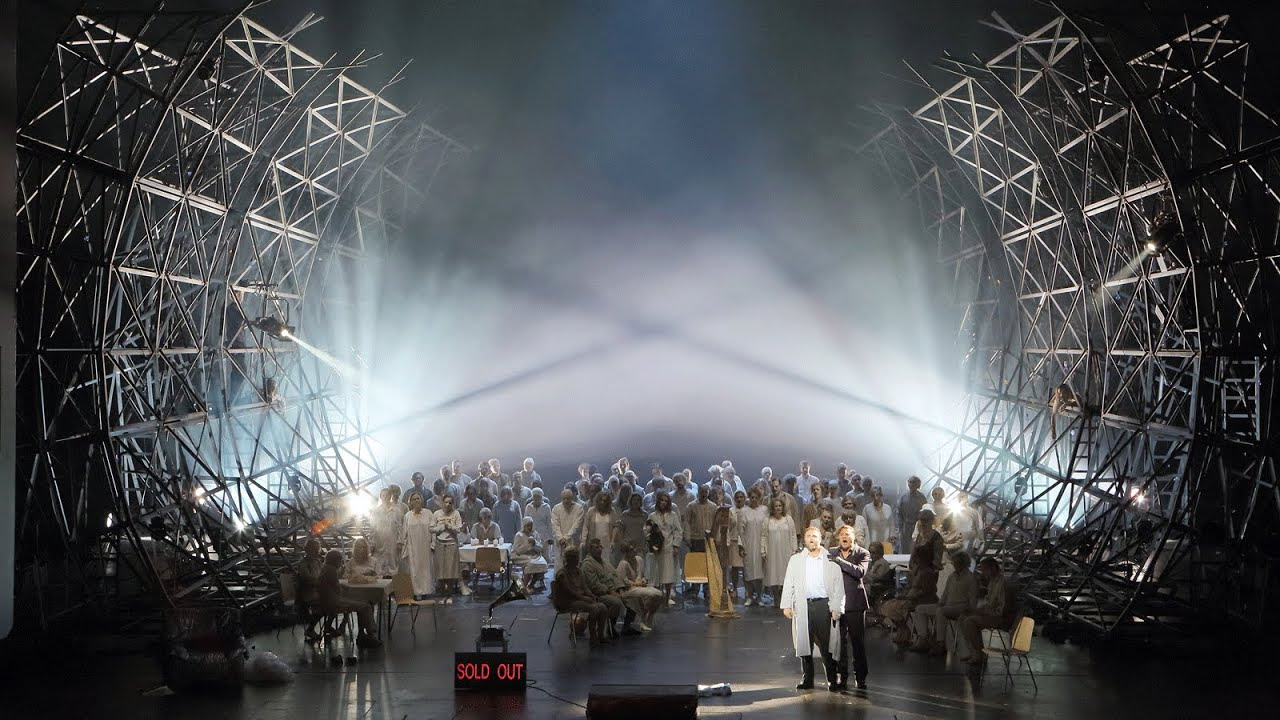