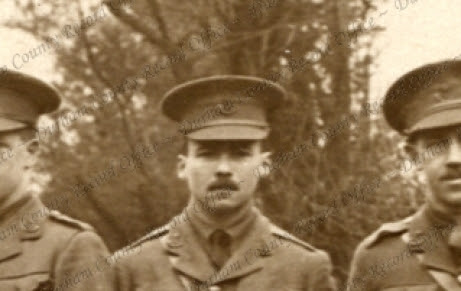 Three premieres of sorts of works by composers who have been dead for a hundred years?  Intriguing. Martyn Brabbins conducted the BBC Scottish Symphony Orchestra in  George Butterworth's Orchestral Fantasia and Cecil Coles Behind the Lines and Sorrowful Dance (broadcast available on BBC Radio 3 here).

The anniversary of the First World War generates interest in composers of the period.  British war poets like Wilfred Owen,  Siegfried Sassoon,  Edward Thomas, Ivor Gurney, Isaac Rosenberg  and Rupert Brooke are justly celebrated, even part of the basic school curriculum. But what of British composers of the period?  Ralph Vaughan Williams, being rather older the "Lost Generation",  survived but many others didn't. How might British music have developed  if Butterworth, Gurney, W Denis Browne (read more here) and others even more forgotten, had lived to fulfil their potential?  Understandably we'ree intrigued.

Gurney at least left enough material that some of his music can be reasonably reconstructed. Gurney's War Elegy, for example, is a  significant work that deserves a place in the mainstream repertoire.  Read about the Proms premiere of Gurney's War Elegy HERE and the background behind it HERE.

Gurney reconstructions are largely built on the composer's original material.  Not so, though, some of the other reconstructions around.  Butterworth's Orchestral Fantasia exists as a 92-bar fragment. A short score may exist, but all that is currently known is a rough manuscript with crossings out and amendments.   Michael Barlow, in his seminal biography of the composer Whom the Gods Love suggests that Butterworth might, in 1914, have been on the cusp of a change in style "with not a few influences from European composers".  Vaughan Williams's music was utterly transformed by his contact with Ravel, and indeed to some extent by Butterworth himself, who spurred RVW to write his Symphony no 2 "London".

Barlow mentions that, while Butterworth was an undergraduate at Oxford a don remarked: "There goes more Red Revolution than in all Russia"   Butterworth is a mystery. Why did he burn his unpublished music? Why did he so cherish the male bonding camaraderie of the trenches? Why did he die the way he did, by throwing himself into the line of fire?  We shall never know.  Barlow also describes the fragment of the Orchestral Fantasia thus  "A hushed, dark-coloured opening, on bassoons and divided violas and cellos, leads to an andantino section in which one basic theme, first heard on oboe and violas, is developed, but the score is too fragmentary for constructive comment. A vivace section of only a few bars includes a promising figure on trumpets, but there the music stops".

Since there is so little to go on, any "completion" can be little more than conjecture. Kriss Russman's version extends the basic core, described by Barlow above, with references to other music by Butterworth, rather more a suite than what Butterworth might have written. Since there isn't all that much true Butterworth around, we recognize fragments and start to think of those other works, (much of it piano song)  rather than the fragment itself. Like the orchestration of A Shropshire Lad heard at last year's Proms, without much point, though enjoyable enough.

Cecil Coles  (1888-1918) , was three years younger than Butterworth, yet already more European in focus. He had lived in Germany, where he was assistant conductor at Stuttgart Opera. This threw him right into the fertile creative ferment of those times, not only in music but in literature, art, theatre  and film.  He knew Richard Strauss and must have heard Elektra.  Perhaps he even knew of Rudi Stephan (1887-1915), whose orchestral music is truly innovative, and whose opera Die ersten Menschen would shock audiences when it was finally premiered after Stephan was killed on the Eastern Front.
What might have become of Coles had he survived? The question is even more intriguing than for Butterworth, for Coles's music is  so distinctive and so individual that it doesn'tb really  fit  into conventional British music stereotypes. This may account for why he was largely forgotten until Martyn Brabbins recorded Coles's music for Hyperion in 2002.  Both Before the Lines and Sorrowful Dance appear on this CD. It's significant that Coles's other great admirer was Gustav Holst.

Coles's Behind the Lines  was written in four movements of which only the first and last survive, Estaminet du Carrefour and Cortège. The second and third movements were titled The Wayside Shrine and Rumours, which may give some indication of the scale of its construction.  So much is made of the role of folksong in British music that it's refreshing to hear how Coles adapts the vibrant sounds of a French drinking establishment into the first movement. It's vibrant with a pungent Gallic twist, sensual and uninhibited, Coles must have known the music of Ravel and Debussy: this is far from genteel pastoralism even when that pastoralism describes earthy peasants.  Coles  defines the harmonic line firmly, which takes off with athletic energy.  These are reels, fast dances which swirl round capriciously. It feels almost dangerously wild.  With a flourish, a more assured line emerges, taken up by the brass, which gives even firmer definition to a wall of sound, cymbals riding on its crest .  Cortège. too, is more than a straightforward funeral march.  No maudlin sentimentality here.  Behind the Lines deals with the experience of war, but it's clear sighted and strong,  even quite gracious.

Coles began Sorrowful Dance for his wife, while on R&R in Southampton. It is a dance, moving with thoughtful deliberation.  It's melancholy yet positive, since a brighter theme  emerges, again firmly defined. Perhaps Coles's wife could take comfort. The circular dance theme returns, as gentle as an embrace.

And so Brabbins and the BBC SSO ended their Glasgow concert with Elgar Enigma Variations. What do we really know about what went into these 13 vignettes? We can guess but can never be sure. An appropriate end to a concert that featured What Might Have Been.
at November 20, 2015