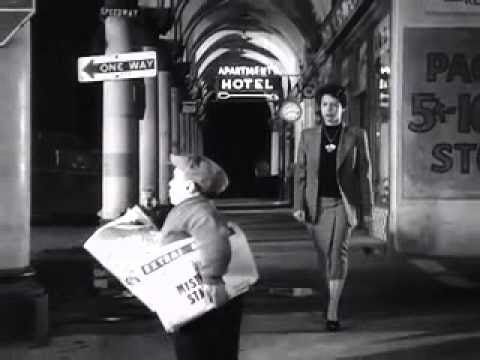 George Antheil's Ballet Mécanique (1924)  (read more here) is one of the seminal classics of the avant garde. But what happened to him?  Like just about everyone else, he found work in Hollywood, getting work where he could. But his creative spirit wasn't entirely dimmed. .For Halloween, I watched Daughter of Horror (1953)  for which Antheil wrote the soundtrack. His contribution, though, is huge - there are  hardly any spoken words, no dialogue, or even narrative. The music "is" the story. This isn't your average B horror flick. It's an extended musical work, illustrated with images. And gosh, what music!  Think about Tom Waits music videos.  Or Eraserhead and Twin Peaks. George Antheil got there first, establishing the iconography.  The director and producer was John J Parker, who doesn't seem to have made other movies, which also suggests Antheil's primary role as auteur.

A woman walks into the sea, apparently crushed in the surf. She wakes in a bedroom, feeling anxious. As she walks down the stairs she sees a cop arrest a man for beating up a woman.  The music wails: a long wordless vocalize like an unending scream. This might now seem standard horror movie fare, but Antheil was doing this very early on and very well indeed. The singer, incidentally, is Marni Nixon who also had a career outside Hollywood, making some of the first recordings of Charles Ives songs, for example.  The woman wanders into a street that could come straight out of a Tom Waits set. Drunks hang out in the shadows, moving with strange, contorted griomaces - very Tom Wait !  A newspaper seller holds a up a headline about a murder. The woman seems to think she's guilty. The newspaper seller is a dwarf - another Tom Waits image. As is the flower seller from whom the bent cop buys a carnation. A drunk confronts the woman. Does she stab him? Why does the cop beat the drunk into a pulp?

The woman enters a nightclub. She looks horribly out of place in her repressed tweed suit and no makeup. Listen to the jazz band though,  African drums and, of all things, a French horn. The woman goes in a cab with a strange man.  Served by a butler, the man gobbles a meal, which disgusts the woman, whom he completely ignores. Is she really there in the room with him? She stabs him with a shiny flick knife. The butler seems totally unperturbed. As he dies the man grabs hold of the woman's ornate pendant necklace, the only thing about her appearance that looks individual. Great shots of the elevator and the magnificent marble staircase she runs down.

Switch to a bit of cod psychoanalysis.  In a graveyard a faceless man shows the woman her fatrher, a drunken, abusive slob, and her mother, a good time girl but frigid..  The sequence of events hardly matters. Aware that the dead man still has her pendant in his hands, the woman  cuts the man's hands open, watched by faceless observers. The actor who plays the woman's father also appears at the beginning of the film as a grinning man, and again later in the crowd who the woman runs into, who raise their arms, Nazi style, against her. She wakes back in her room. Is it all a dream? She opens a cupborad, and there's the dead man's hand, still grasping her pendant, and moving. All this might seem kitsch but the cinematography is very good. The images are carefully chosen, much in the way that 1920's German expressionist films were made.  And thus the connections with George Antheil's past and his glory days in Paris and with the avant garde scene, and the film makers of that era.  How Antheil might have thrived if he'd been able to stay in Paris! On the other hand, without Antheil in Hollywood, we might not have Tom Waits, and,David Lynch and a whole host of film makers both art and schlock, ever since.