Cav & Pag, ROH - what a thieving magpie can tell us 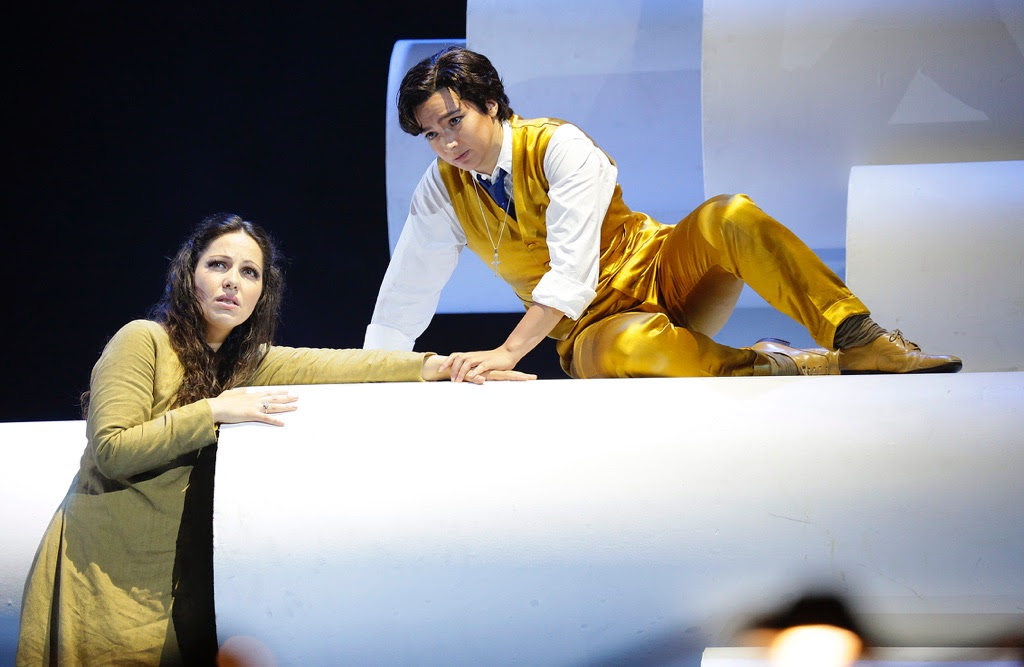 Why did I spend big money to see tonight's Royal Opera House Cavalleria Rusticana and I Pagliacci?  I'm glad I went.   READ MY REVIEW HERE.

Antonio Pappano has said of this Cav and Pag that it's "full of clichés but true to Italian life" (Read more HERE)  And he should know.  Neither Mascagni nor Leoncavallo wrote on the level of Verdi or Puccini (though read about Leoncavallo's Zazà HERE in Opera Today). But Cav & Pag work when they're done with style and panache. That's why Cav & Pag is Christmas fare. At Christmas we can swallow kitsch when it's festive and fun. Tis the season of goodwill, after all. But will the booing mob be out as usual getting their pleasures from incandescent hate ?

{My first thoughts on returning from Cav & Pag.  Anyone who does noy "get" the prologo  won't "get" the opera at all. Needless to say, some will blame this on the director when in fact, as the Prologue says, it's rthe author ! That should have the W"respect the composers wishes" crowd in a rage. Most of the time they don't understand the composers wishes)


Damiano Michieletto's Rossini Guillaume Tell had the mob spluttering.even though they didn't know the opera well enough to realize that violence (including an explicit reference to rape) is in the libretto and in the music. And how can they have missed that the whole opera predicates on sadistic violence and abuse of power? A man is forced to shoot his own child!  But two seconds of tit upset more people than sadistic torture and child cruelty.  What other groups  think killing is entertainment but the sight f female flesh a crime ?  Read my review Audience back Gesler, not Tell HERE)

Mascagni and Leoncavallo present no such demands. Indeed, Cav & Pag thrive on gleeful cliché, so why not milk the fun for what it's worth.  Besides, director Michieletto knows his Italian repertoire pretty well. His Rossini La gazza ladra, first heard in 2007, was chosen to start this year's Pesaro festival, a place where people might just know a wee bit more about Rossini than most. At Pesaro, he has also directed La  Cenerentola, La scala di seta,  and Sigismondo. He has also directed productions at La Scala, Theater an der Wien and Salzburg, mostly Italian repertoire. Since he is Italian, chances are that he knows a bit about Italy and Italian society

I've written about Michieletto's La gazza ladra HERE It's a very fine production indeed, which captures the theiving magpie's fascination with bright, shiny things. the bird has a child's sense of wonder. The magpie loves silver because it's beautiful to look at. People love silver because it affirms their status over the poor. They're quite happy to see the innocent destroyed. In comparison, the magpie's crime is nothing at all. In La gazza Ladra, we can see the basic elements of Michieletto's style - child-like wonder, strong visual lines and so on.  His Guillaume Tell falls into place.

Michieletto's Rossini La scala di seta, is more robust and comical, reflecting the very different nature of the opera.  It's a farce that predicates on a woman meeting her secret husband who climbs up a rope of silk. Hence the set, like the opera, functions on quirky levels and  angles.  Visual gags and cheerful clichés. The opera is relatively slight but it sends up a society held together by pretensions and illusion. So that's why I hope the ROH Cav & Pag should be fun.
at December 03, 2015