Hottest ticket in town! The Wigmore Hall was packed for La Nuova Musica, presenting Antonio Cesti's Orontea. Cesti (1623-1669) was a fascinating character.. He became a monk aged only 14, but discovered the allure of wilder things, becoming involved with a group of artists known as the Accademia dei Percosi (The Academy of the Stricken) led by the charismatic painter and poet Salvator Rosa.  "Stricken by the theatre and its popular,  bawdy delights", as Rick Jones writes in his informative programme notes, Cesti turned to opera, then a new art form. 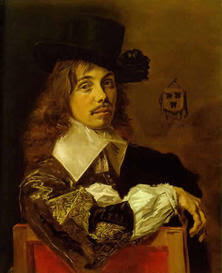 Cesti then came under the patronage of the Medicis in Florence and took avidly to the lifestyle, breaking his vows of chastity and poverty. In 1651, he was kicked out of the Franciscan order for leading a "dishonorable and irregular life", and moved to Innsbruck where he served the Archduke of Austria.  It was here that Orontea was written, between 1654 and 1657, to a libretto by Giacinto Cicognini, a friend from Percosi days. Eventually, Cesti returned to Rome hoping to be released from his vows, but was pointedly humiliated by being put to work in the papal offices. He managed to get back to Florence, where Orontea became so popular that it was staged in 20 cities in 20 years. It was then lost for over 300 years until copies were discovered in Cambridge and Bologna.  René Jacobs made the benchmark recording some 10 years ago, so La Nuova Musica and conductor David Bates have a lot to measure up to. But how wonderfully they suceeded!

La Nuova Musica  have a reputation fore imaginative flair. This performance was vigorous, energetic, and above all fun, true to the composer and the audacious spirit of his time. The impact was magnified at with its warm, close acoustic. Orontea requires a fairly large orchestra - two harpsichords, two theorbos, one with a longer shaft than the other, two violins, a violone, a viola da gamba, two  baroque guitars plus an impressive set of woodwinds, large and small, one with an unusual curved chamber that creates sounds as strange as it looked.  This instrumentation allowed a wide range of sounds, some strikingly exotic, mingled together. Themes change and switch, keeping you on your toes, so to speak. Even by the standards of the baroque, the plot is convoluted.  The central figure is Alidoro (Jonathan Mc Govern) a charming opportunist, whose fortunes rise and fall and rise again. Everyone adores him anyway. Cesti himself sang the part in performance, so perhaps there's an element of self satire, as if Cesti is cocking a snook at the very idea of order.  Orontea, the Queen of Egypt (Anna Stéphany), sings of freedom, then falls hopelessly in love with the mysterious stranger Alidoro. Her adviser, Creonte (Timothy Dickinson), tries to set things straight. Instead, though, we enjoy a  barrage of crazy sub plots, fights, drunken orgies, cross-dressing skits and earthy humour. Immediately I thought of Cavalli and Giasone in particular. Sure enough, Cesti knew Cavalli and sang in Cavalli's operas. There's no room in the baroque for timid. Perhaps there's also a throwback to the medieval idea of Lords of Misrule.

Early audiences were given printed copies of the text, complete with candle attachments.  At the Wigmore Hall, we were helped by surtitles projected on the wall above the stage, in a free translation with rhyming couplets which apparently catches the irreverent spirit of the original.  From where I was sitting, I couldn't read a thing but that proved not to be such a bad idea, for the opera makes perfect sense when you stop worrying about literal meaning, and focus instead on the madcap delirium that soon becomes oddly engaging. Vocal performances were vivid, which helped a lot. In addition to the three principals above, Mary Bevan sang Silandra, Michal Czerniawski sang Corindo, Anat Edri sang Giacinta, Christopher Turner sang Tibrino and Edward Grint sang Gelone, the amiable drunk.