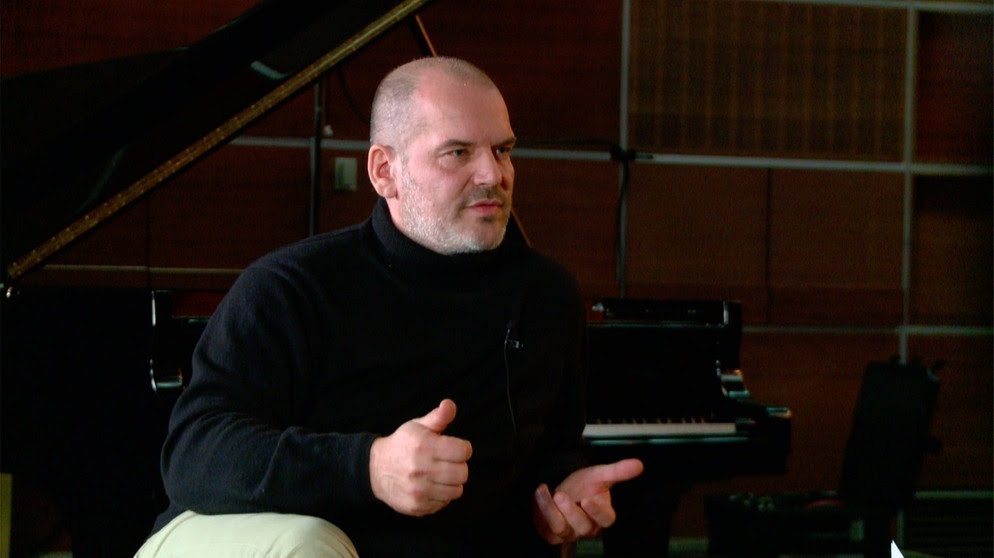 From BR Klassik, a video of a recital by Florian Boesch and Martin Martineau.  It's a superb performance, of course, but it's also an unusual opportunity to watch how Lieder specialists approach their art.  Filmed in one of the small studios in the radio station building, the focus is unusually intimate and focused. Only at the Holywell Music Room, Oxford, do listeners get this close to performers, so close that the recital feels like personal interaction.  What a thrill it is to look inside the piano, as a singer does, and see the strings vibrate, the music physically quivering into life.

The audience, presumably invited, are paying attention, even though the seats look uncomfortable and some of the repertoire was difficult. For this is what makes Lieder unique. It's not "background entertainment", but intellectual engagement. The poet's ideas and emotions are conveyed by composer and performers and processed through sensitive listening. Not at all a passive spectator sport !

These days when the very word "intellectual" is a swear word, we need to remember the social history of Lieder. Opera as we know it now didn't really exist. People would go to the theatre for a good show, with music. Mozart "is" intellectual, but there's no reason why we can't just sit back and enjoy. Singspeile and more earthy entertainment were pretty much the norm, even for Beethoven, whom I can't even imagine doing showtunes.  That's why Rossini and Donizetti seemed so revolutionary. There was Schubert, raised in Italian as well as German tradition, trying to figure out how to write opera and never quite succeeding.

Socially, too, Lieder reached an intellectual audience. Most of the poets Schubert set were near contemporaries, often men whom he knew personally. Poetry absolutely is at the heart of the genre, and poetry means ideas. At Liederabends. people would flirt, and eat and chat, but they came for the mental challenge of hearing poetry translated into song. Kind of like a literary salon, with music.  While there's lots of strophic ballad in the genre, its highest points are reached in durchkomponierte art song.

Boesch and Martineau chose a challenging programme, quickly launching from the famous Der Wanderer D489 to Amphiaraos D166. There's no way you can get this song without a basic appreciation of Greek myth, though the forceful chords evoke powerful, if doomed, heroic resolve. The poet was Theodor Körner, who actually did die a hero, fighting Napoleon with the Lützower Jäger.  Boesch and Martineau did this song at the Wigmore Hall a few weeks before the Munich recital (read more here). This later performance was even more ferociously intense, bringing out the the structural progressions in the song so well that I rushed to read what Graham Johnson wrote about it.

As in London, they followed this with Gebet wäjhrend der Schlacht D171 and then straight on to the declamatory ballad  Die drei Sänger D329 1815. Schubert loved setting these sagas, though they are hard to carry off well without the communication skills Boesch and Martineau possess. Schubert didn't complete the song, so Boesch recited the rest of the poem so we could imagine what might have been. Then, on to Waldesnacht D 708 and Der Gott und die Bayajadere D 254, which Boesch sang with Graham Johnson at the Wigmore Hall at the start of the WH's complete Schubert song series. (read more here)   Again, being in a small studio and so close up made the experience even more intense. Boesch and Martineau created the lilting lines so they sounded exotic, even dance-like, evoking the fabled India of Goethe's imagination. For all its loveliness, this song isn't that easy to do. Boesch and Martineau bring out the sumptuous beauty in it, but also the turbulent anguish of the Bayadere ( a dancer) who sacrifices herself for love.

Three Liszt settings, Ein Fichtenbaum, Vergiftet sind meine Lieder and Loreeley.  Lovely piano parts, for Liszt was a pianist and "spoke" through the instrument rather than picking up on the bitterness of Heine's irony.   Boesch, however, compensated by articulating the words expressively, emphasizing the inner poetry. Watch his face as he sings, and listen to how he emphasizes meaning. .Then on to Schumann, also a pianist and married to one of the greatest pianists of her time.  Fantastic piano lines, and in Aufträge op.77, No.5  a fiendishly fast-paced, tongue-twisting, lyrical vocal part. Humour is part of its drama. At the end, Boesch burst into a huge grin.  The melancholy Meine Rose flowed gently, and Herzeleied Op 107/1 was lusciously plangent.

These prepared us for a masterful set of 3 of the 9 songs from Lieder und Gesänge aus 'Wilhelm Meister', Op.98a, Wie nie sein Brot mit Tränen aß, Wer sich der Einsamkeit ergibt, and An die Türen will ich schleichen.  Schumann's settings aren't as popular as those by Schubert and Hugo Wolf, but they are every bit their equal, with firm, contemplative and - dare I use a naughty word, "Intellectual". Boesch and Martineau delivered them with dignity and conviction so strong that one could almost feel the presence of the Harper warning us through his strange poetry.

Two Schubert encores, Nachtviolen and Heidenröslein,, just as at the Wigmore Hall. . This latter is so ubiquitous that some think its folk song, but it isn't. It's Goethe.  Again, listen carefully to Boesch as he sings, pointedly stressing the subtle violence. The youth trifles and kills the rose but she fights back with its thorns. "Röslein sprach: "Ich steche dich,/ Dass du ewig denkst an mich/ Und ich will's nicht leiden."  Before antibiotics, you could die if a scratch became infected.  But the song switches quickly back to cheery insouciance and femininity which we know isn't as innocent as it may sound. Watch Boesch's expressions. Yes, this is a humorous song, though it packs a lethal punch!