Robert Schumann Das Paradies und die Peri  (Op 59 1843) in a recent performance from Paris on BBC Radio 3 (starts around 12 mins). This is an excellent performance, as clear and lucid as the diamonds and star-studded Heavens that light up the imagery in Thomas Moore's saga Lalla Rookh (1817)  upon which Schumann based his oratorio.  Jérémie Rohrer, who conducts the Orchestra Nationale de France (ONF), is one of the young generation of French conductors whose background in baroque provides strong foundations for their approach to other repertoire: lucidity, intelligence, and an absence of self-indulgent waffle. In other words, respect for the composer and the period, whatever instruments might be employed.  These values are important in Die Paradies und das Peri because they highlight the clarity of Schumann's conception. Rohrer is definitely worth listening to, even if you're used to Gardiner and Harnoncourt.

Be wary of the BBC description, though. Das Paradies und die Peri is not rare, nor religious. There are many recordings and Simon Rattle has conducted it live frequently. But its position in Schumann's output and in music history is still misunderstood.   I first encountered the piece when John Eliot Gardiner led a Study Day into it  at the South Bank. It was "new" to many then, and, to be frank, I couldn't get it at all, despite Gardiner's insights. It's surprisngly radical, and doesn't fit into neat categories. Compared with Schumann's Lieder and piano works, it's huge. Consider Schumann's Szenen aus Goethes Faust which he began working on a year after Die Paradies und die Peri, and continued to work on as he began Genoveva (Op 81 1850) and also the Requiem (Op 148 1852). Schumann could turn poems into song cycles on a grand scale. What might he have achieved if he had not succumbed to illness and died so young?

Then there's the overwhelming influence of Wagner, whose Die fliegende Holländer premiered in Dresden in 1843.  Modern approaches to opera are defined by Wagner and Verdi, but Schumann represents an alternative. Both Schumann and Wagner owe huge debts to Carl Maria von Weber, but both were heading off in new directions of their own.  Schumann's dramatic work may have been eclipsed in the past, but it needs to be re-assessed. 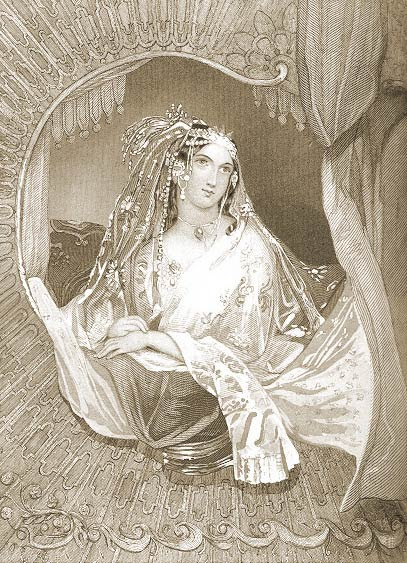 Die Paradies und die Peri is also seminal because it shows the depth of Schumann's engagement with literary sources. Even for the son of a Leipzig bookseller, Schumann was exceptionally well read and up to date on the latest literary trends. Moore's Lalla Rookh developed the fashion for orientalist fantasy, which intrigued the Romantiker imagination, opening up new horizons  and  alternatives to  western European constraints. The Generic East implied unparalleled extremes, and emotions too wild for Christian convention.  Lalla Rookh is One Thousand and One Arabian Nights on acid. Moore was an opium addict, like Thomas De Quincey and, later, Charles Baudelaire. Nothing like a bit of dope to break inhibitions.  Nonetheless, the literary style of Lalla Rookh is itself utterly relevant. It is written in an exaggerated, verbose style so highly perfumed that it's almost unreadable now, but that was part of its original appeal. Exotic names and words pour forth in hallucinatory frenzy, creating a haze of soporific delights.  How thrilling these references to strange, obscure places, people and objects to readers who had no idea of the real East, or Asia or Africa for that matter.  It was enough that the words sounded wonderful, and, significantly, musical on their own terms."Lalla Rookh", incidentally means "Tulip Face" which was a compliment in times when tulips were prized imports from distant lands.

If anything, Schumann plays down the text so it flowers in his music.  The peri flits freely  between Egypt, Africa,  Syria ^the land of roses", "Cashnere (Kashmir) and other places including "Peristan" (the land of Peris?) and ends up by the throne of "Alla" surrounded by non-Islamic lotus blooms.  but Schumann's music is thoroughly German. Some figures, especially in the choruses, evoke the sturdy rhythms of Der Freischütz or even Der Vampyr, but the general style is distinctively Schumann. The solo vocal parts rise out of the orchestral ensemble as if they were glorified instruments.  The Angel, for example, is often seated between the chorus and the orchestral,players, so her voice shines forth from above the soloists.  Read more about what i've written in the past about Die Paradies und die Peri  HERE and about Genoveva HERE.  .And don't forget the excellent Rohrer performance available for roughly two more weeks.  And also Paul Dukas La Péri - poeme danse (1912) which follows, illustrated in the top photo. .
at December 16, 2015