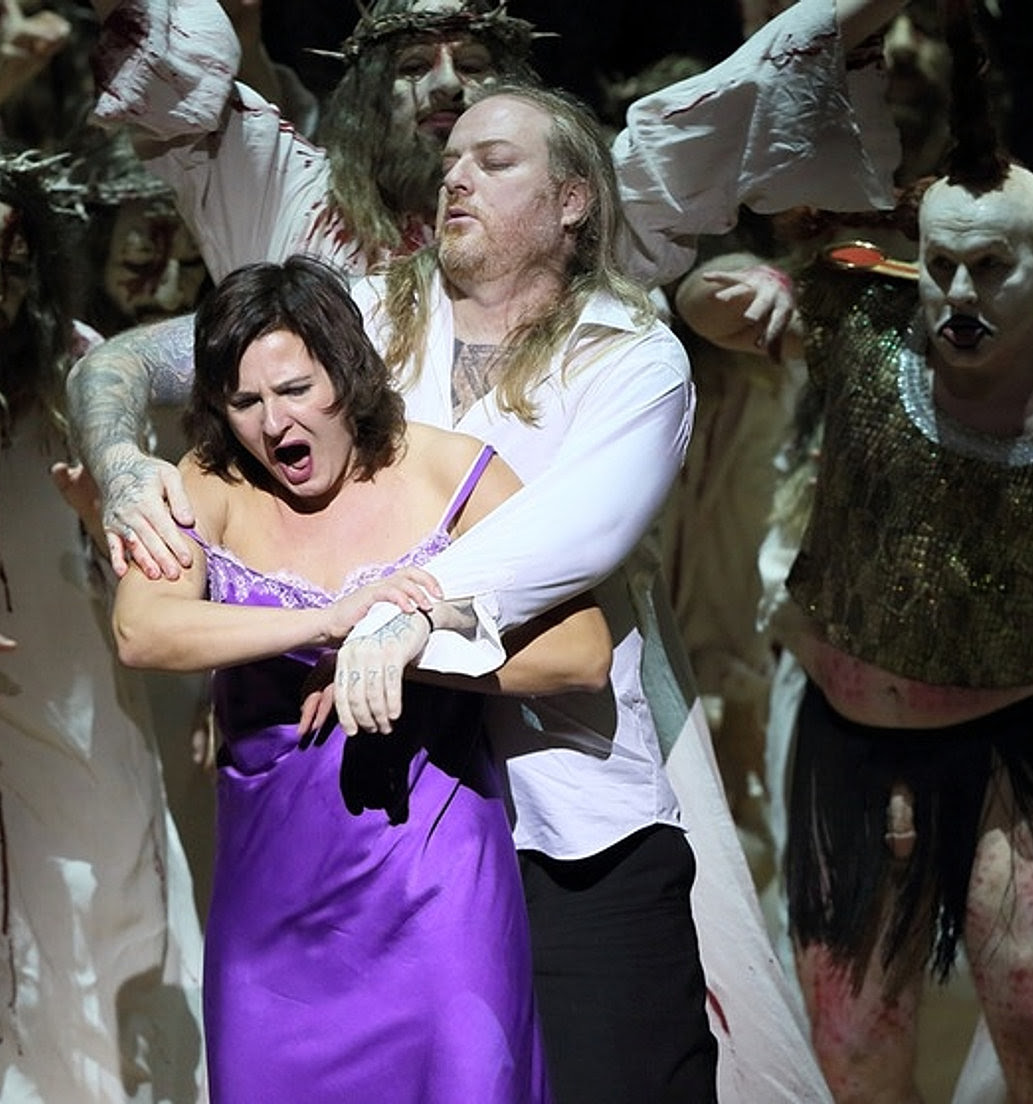 Sergei Prokofiev The Fiery Angel at the Bayerische Staatsoper, Munich, brilliantly conducted by Vladimir Jurowski.  As an opera, The Fiery Angel poses difficulties, but as abstract music it works so well that Prokofiev adapted it to become his Symphony No 3. Musical values dominate the score, adding depth to a narrative that poses as many questions as answers. Renata is clearly mad.  Her obsession with Madiel dominates her life to the exclusion of all else. She assume Madiel is an angel but her delusions are sexual. rather than spiritual. So why does a seemingly strong personality like Ruprecht get sucked int the maelstrom? Listen to the orchestra, though, for the music makes madness seem quite plausible.  Jurowski is in his element. He's more elegant than Gergiev, and wilder than the eminently sensible Neeme Järvi, though you need to hear all three.

The Fiery Angel is Prokofiev's Faust. Hence the litany of occult mumbo-jumbo that explodes in the First Act, heralding the entry of the Fortune Teller (Elena Manistina) a gorgeous camp caricature who disappears for the rest of the opera.  This occultist laundry list tumbles out of the score like madcap music: the composer isn't bothered what the words means, because they sound good, as words. Later, when Renata (Svetlana Sozdateleva ) and Ruprecht (Evgeny Nikitin) think they've summunoed up a spirit, loud knocks burst forth from the orchestra in almost joyous delirium, as if Prokofiev is suggesting that the gullible will hear signs in anything.

Less succesful, though, is the staging, directed by Barrie Kosky, with sets by Rebecca Ringst.  The Faust theme is universal, so in principle there's no problem with changing the 16th century rooming house into an ultra deluxe modern hotel, though you wonder how  a nutter like Renata got in.  M\ybe everything's in her head, anyway. Perhaps we're in Renata's dream world, since, when the scene moves to Cologne, the room stays the same. Some audiences won't notice, seduced by chintz and fake rococo furnishings.  Renata's ravings become predictable after a while, the part being written for high-flown hysteria.  Sozdateleva is fairly young, but doesn't quite capture the Lulu-like innocence that so entrances Ruprecht. She can act well, though, twitching like a lunatic resisting restraint, her eyes rolled back as if the Devil himself were swallowing her soul.  The score doesn't give Ruprecht all that much to do, vocally, so a talent like Nikitin doesn't get to show what he can really do.

When the opera descends into the demonic, things liven up. Again, the orchestral interludes are paramount, illustrated here by dancers, wonderfully costumed by Klaus Bruns.  Ladies appear in evening dress, revealed close up as muscular men, covered in tattoos. A visually magnificent introduction to the appearance of Agrippa von Nettesheim (Vladimir Galouzine) another well-cast cameo.

The dancers return in the tavern scene, where .the Faust references are vivid. Kevin Conners' Mefistofeles is brilliantly conceived, with an amazing costume which suggest a clown gone mad.  Fabulous three-corner hairdo, like the horns of Satan. Again, there's not a lot to sing, but Conners acts well, moving in tight ensemble with the dancers, who this time are devilish grotesques. A pity, though, that Kosky's prurience gets the better of him. Mefistofeles's penis (not Conners') hangs out from his pants, and later he sodomizes Renata and eats "her" penis as a sausage. This may be true to the morbid sexuality in the opera, but I'm not altogether sure that Prokofiev would have taken it so literally. It's all a bit schoolboy, detracting from the otherwise good characterization in the costume.

Igor Tsarkov sang Faust, elegantly though oddly garbed. Again, this may well be a good reading of Prokofiev's intentions since the roles of Faust and Mephistofeles are ironically reversed.

In the final Act, even Ruprecht is disposed of, more or less, and the narrative centres on Renata, now in a convent. The dancers now are nuns, dressed as Jesus, blood pouring from their crowns of thorns.  Kinky, but then a lot of religious imagery is kinky if you think about it.  Even after her exorcism, Renata is still condemned as an agent of Satan.  The poor girl gets screwed in every way.  Sadly, Kosky seems to enjoy the sex bits too much to grasp the cynical detachment of Prokofiev's sardonic irony. The costumes are great, but I think I'd prefer a less infantile interpretation and one that picks up on other levels of the opera.

Now I've watched Kosky's Handel SAaul at Gl6ndebourne on film, where you can see the close ups. Live it would have been imporessive because you see the giant floral feast and display, and the pretty costumes. But close up you see the diussiapation - which is true to meaning - but yet again Kosky's obssession with grim, joyless sex. Two naked old men, groping each other, one asproutuing breasts the other feeds on. Yes, it's an image, but overdone and rotesque. plus the same ewarth floor as in Castor and Pollux ! Cet P was OK because it is about sex. But the same critics who raed about that adored Saul ? Go fiure.

Please also see my piece on Boito Mefistofele also from Munich, which was excellent - René Pape, Opolais, Calleja
at December 12, 2015