Kurt Masur has died, aged 88. Masur was much, much more than a conductor. He transformed his city, his nation and the world. Would Germany be united today without the movement that led to the fall of the Berlin Wall? Would the Iron Curtain still hold sway? The cataclysmic events of 1989 were only 26 years ago, but seem to have been forgotten, by too many.  To truly honoure Masur, we need to appreciate Masur the man, and what shaped him.

Masur was born in Brieg (Bryzg) in Lower Silesia, once part of Germany, now part of Poland.  That might mean nothing, but it's this background of war, ethnic cleansing and exile that affects people.  Christoph Eschenbach was traumatized, but he was only 5. Masur, who was 18,  could understand.  Masur's career was built on the rock-solid foundations of German Democratic Republic music-making. In the DDR, the traditions of German music remained resolutely untouched by what was happening elsewhere. The regime was repressive, but it also resisted capitalist pressure, maintaining a superb music education system, which supported the industry so it could do what it did best, without having to cave in to the commercial forces of a new era where recordings started a new mass market dictated by public taste.  What we think we know is shaped by market forces.  Harnoncourt's response was to go back to the roots (read more here). Masur and the East German tradition were "at" the roots.. Masur conducted the Dresden Philharmonic Orchestra from 1955 to 1972, with breaks between, and conducted the Leipzig Gewandhaus Orchestra from 1970 to 1996.  These two great pillars of the German tradition remained pure and largely intact. So Masur's repertoire was standard Austro-German, like Thielemann's after him? Better that conductors should do what they love best. 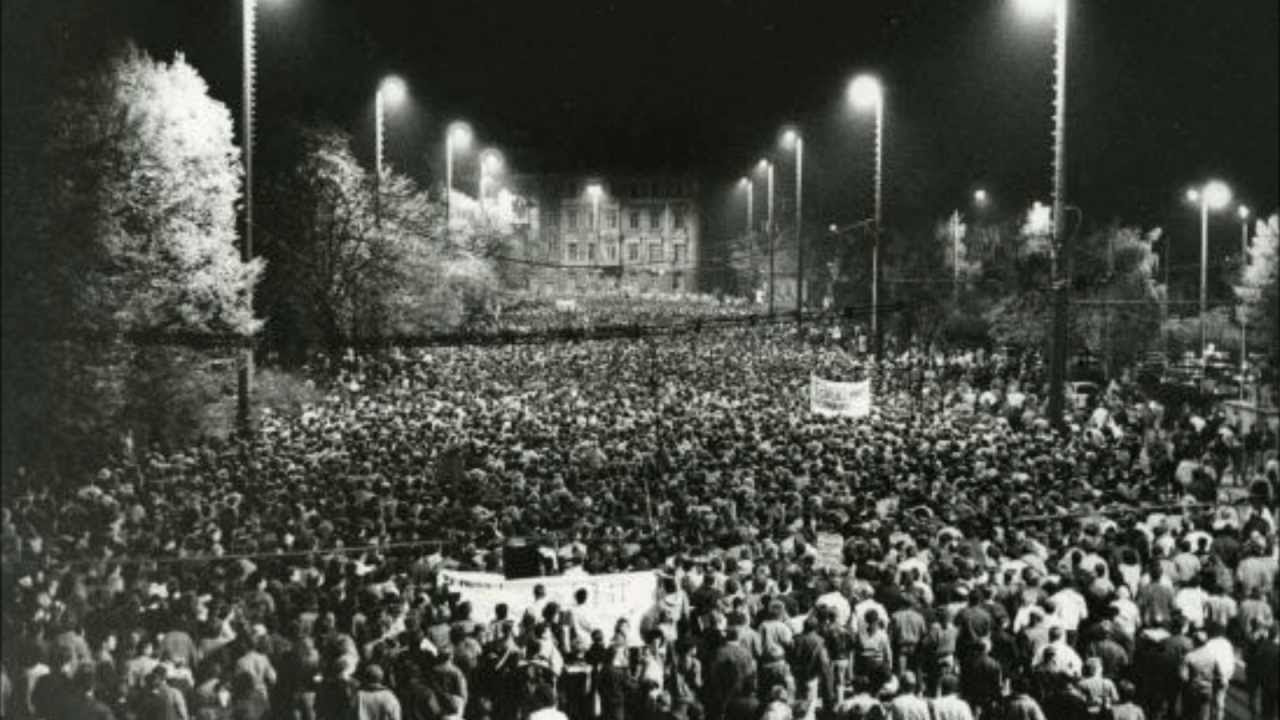 The city of Leipzig has been a centre of German culture and idealism for centuries.  Consider its "favourite sons" among them Bach, Schumann and Mendelssohn. It also has liberal tendencies. When the Nazxis tried to rip out Mendelssohn's statue outside the Gewandhaus, the Mayor stood up to them. So when protests for freedom began in early 1989, Leipzig was at the heart of things.  Masur attended meetings at the Nikolaikirche, and stood with the thousands  who marched through the streets. Just as Furtwängler made a statement conducting Beethoven to make Goebbels squirm, Masur played Beethoven as a symbol of liberty and freedom.   In 1956 and again in 1968, the Soviets silenced protest by sending in tanks.  The Nikolaikirche movement's emphasis on non-violence grew from very realistic awareness of danger.  Just as Sibelius brought the world behind Finland against Russia,  Masur and the Leipzig Gewandhaus Orchestra used their prestige to galvanize support invoking moral authority.

A few weeks after the "revolution" of October 9th, the Leipzig Gewandhaus Orchestra went on tour. At the time, we worried that they wouldn't be allowed out in case they defected.  When they walked onto the platform at the Sheldonian in Oxford, the audience began to cheer as a gesture of appreciation. The orchestra seemed visibly moved. Masur let them take in the solemnity of the moment for as long as possible, before launching into an impassioned evening of Beethoven.

Barely two years later, Masur left the Leipzig Gewandhaus Orchestra for New York.  In London, we got to know him well, when he was Chief of the LPO during the first decade of the millennium, while simultaneously heading the Orchestra Nationale de France and guesting elsewhere. So much for the nonsense idea that conductors should only manage one orchestra at a time.  A friend  said Masur was "too foursquare", but another said that it was his DDR heritage, which puts other tastes into perspective. ie not Bernstein or Karajan.  Masur went on to many things after Leipzig, but Leipzig will always be central to his legacy.  It is sad that it has taken Masur's death to alert the world that he had a huge career long before he went to the west.

Here is a a link to the best and most comprehensive obituary. Extremely well written, by someone who knewe the subject well. Once newspapers used to employ serious professionals to do these things, and update them when the subject died. In this case, the un named writer seems to have stopped about 10 years ago because the info on London and Paris is sketchy and seems to have been filled in by someone else, as some other parts like the first paragraphs.  But it gives an excellent and personal insight,

Below a clip of Masur conducting the Leipzig Gewandhaus Orchestra at the Nikolaikirche.(not 1989)