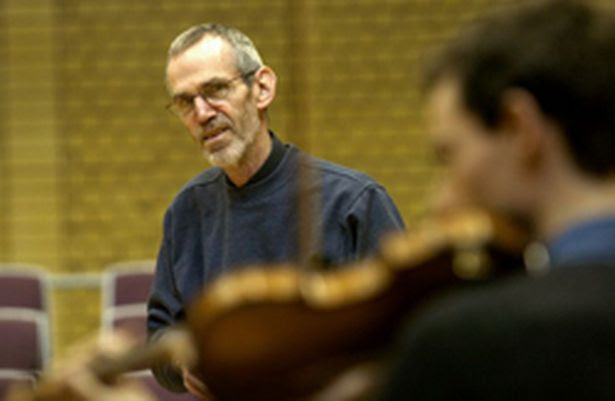 At the Wigmore Hall, the London premiere of a major new work by Howard Skempton, The Rime of the Ancient Mariner, with Roderick Williams and BCMG, the Birmingham Contemporary Music Group.

Samuel Taylor  Coleridge's The Rime of the Ancient Mariner intrigues because there's nothing quite like it in English verse. Though its tone suggests ancient saga, its subject was unequivocally modern, in the sense it caught the Zeitgeist of the Romantic era's fascination with the "Gothic". The Mariner breaks unspoken  rules and kills the Albatross. He and his shipmates are cursed, dying of thirst though there's "water, water everywhere" around them.  Two centuries later, the Rime still haunts. The Mariner's journey is a descent into the darker unconscious. Like the wedding guest, we "fear thee, ancient Mariner ! I fear they skinny hand!"

Howard Skempton's setting grows from the ballad, so symbiotically it seems a "living thing". The vocal part reflects the strange obsessive nature of the text which draws the listener in as if hypnotized.  The cadences rise upwards and down, at a pace which suggests a hard march. Coleridge began the poem while hiking on the moors.  Roderick Williams is a remarkable narrator, capturing the demented undercurrents in the verse. The lines run like a form of Sprechstimme, not recitation, yet not quite singing. This nightmare does not let a voice take full flight. Williams has a gift for natural, direct communication, without theatrical histrionics. He makes us sympathetic to the Mariner as a mortal man, which makes his fate all the more tragic.

The voice is accompanied at first only by the cello (Ulrich Heinen), legato drawn drone-like, as if it were some ancient, primitive instrument, or, indeed, a force of nature, like a sinister wail.  The cello carries the music for a while, until other voices join in in subtle combinations. The double bass (John Tattersdill) quietly murmurs, suggesting sinister depths.  The viola (Christopher Yates) leads the violins. When the ship is becalmed -- "As idle as a painted ship/Upon a painted ocean" -- the music hovers almost imperceptibly, as if listening out for a breeze. When things change, the piano (Malcolm Wilson) and other players create a tumult.  When the visionary figures appear, the high violins at last take flight.  Coleridge  writes movement into his lines, which Skempton translates into abstract sound.  We listen, as if spellbound to the strange, unworldly atmosphere.  Maurice and Sheila Millward, who suggested the setting and commissioned the piece, had insight. Skempton's The Rime of the Ancient Mariner is a remarkable work which needs to become part of the canon of British music.

The BCMG Wigmore Hall concert began with  Dominic  Muldowney's An English Songbook (2011) with a new song, "Smooth between the Sea and Land", a BCMG commission receiving its London premiere. This song is a setting of A E Housman, and reflects the poet's distinctive timbre, which stands out in contrast to the three settings of W H Auden, whose arch sophistication demands music of equal bite. Muldowney;'s "At Last the Secret is Out"  and "Funeral Blues" reflect Auden's verbal intelligence, Yet when Roderick Williams sang "Stop the clocks.....", one could feel the sensitivity which Auden concealed behind his combative, cynical surface.

Songs to poems by Edward Thomas  and John Betjeman bridged the divide between Auden and Housman,  with Muldowney creating a  nice, almost bluesy feel as if shadowing the spirit of the 1920's.  Muldowney responds even better to Shakespeare. His version of "Winter " nips along, as if skidding on ice. "tu-whit, tu-who, a merry note", sharply  manic. Finest of all, Muldowney's "Fear no more the Heat of the Sun".  This song is the heart of the cycle, connecting to "Funeral Blues" and "Winter", but also in mood to the other songs in the group. It's a wonderful song, at once elegaic, yet tender. With Skempton and Muldowney, the art of English Song is alive and well.

This review  appears in Opera Today